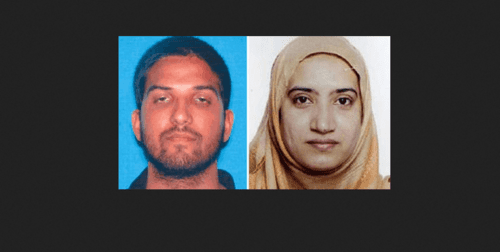 After San Bernardino: Hatefacts And Stupidfacts—We Let Muslim Immigration Increase AND Let Pakistan Get The Bomb.

Two Muslims shot up a Christmas Party for county employees in San Bernardino, California on Wednesday.

But two of the key words there, "Muslim" and "Christmas," were yielded up to us by the Main Stream Media hacks only with the utmost reluctance. And the husband, they assured us, was American-born! He might be Muslim, and have an Arabic-looking name, and he may have taken a trip to Saudi Arabia to find his wife, but dammit he's an American lad! Born here!

Third World immigrants, like native blacks, have become sacred objects, about whom nothing negative may be said. Heaven forbid, therefore, that any consumer of Mainstream news should mistakenly assume Syed Farook to have been a—gasp!—immigrant. No, no, he's all American, just like you and me … well, like you.

Just two weeks ago, I explained how it works.:

The first generation of immigrants find themselves in an Aladdin's Cave of glittering plenty and opportunity: work easy to find, land cheap, welfare abundant, the natives gullible. They're happy.

Then comes the second, native-born generation. Drawn from a low-IQ population that's been accumulating genetic defects via a tradition of cousin marriage since the Bronze Age, and raised in a religion totally at odds with Western ideas of self-actualization, they are fidgety misfits. They come to hate the country of their birth, and in extreme cases act out the hatred like this.

But what did I say there, "low-IQ"? Surely we don't let in low-IQ people from Pakistan, do we? Farook's father must have been a brain surgeon or something, right?

Not according to the New York Times. Farook Senior came here from Pakistan thirty years ago, they tell us. He worked as … a truck driver. [Couple Kept Tight Lid on Plans for San Bernardino Shooting, December 5, 2015]

Oh, right. Now I remember the great truck-driver crisis of the 1980s, when trucks were rotting in the loading bays because nobody could be found to drive them. It was work Americans wouldn't do. Thanks to our brilliant immigration policies, Mr Farook and a million or so other Third Worlders came over and saved our economy! Thank you, Mr Farook!

Some years ago I coined the expression "better dead than rude" to describe the mindset that says if the price of preventing terrorist atrocities is racial or religious profiling, then the price is too high. That mindset is now very well settled-in to 2015 America:

Neighbors of San Bernardino shooter Syed Rizwan Farook told ABC Wednesday that they noticed "suspicious activity" at Farook's home recently, but did not report it for fear of being called racist …

Aaron Elswick—a neighbor of Farook's mother in Redland—said that another neighbor told him "they had I guess been receiving packages—quite a few packages within a short amount of time, and they were actually doing a lot of work out in the garage."

"She was kind of suspicious and wanted to report it," Elswick explained, "but she said she didn't want to profile." Shooter’s Neighbor Didn’t Report ‘Suspicious Activity’ For Fear Of Being Labeled Racist, By Christian Datoc, Daily Caller, December 3, 2015

It’s important to note that, in several European countries, including the land of my birth, that neighbor, if she had made a report, could have been arrested, fingerprinted, and charged with behavior likely to inflame racial hatred.

The U.S.A. has not gone that deep into the darkness yet, but it's only a matter of time.

A key Dissident Right concept is the "hatefact"—a fact that is true, but may not be mentioned in polite society for fear of unmasking oneself as Politically Incorrect. The vast disparities in violent crime levels between blacks and other races, for example, are hatefacts. They are true, but mention of them will get you in social trouble…let me tell you.

A stupidfact is a fact that reveals the gross stupidity of the conventional wisdom we live amongst.

An example of a stupidfact: Since 9/11, the rate of immigration into the U.S.A. from Muslim countries has increased to 100,000 a year, from half that figure before 9/11, according to Pew Research.

Here's another candidate for a stupidfact: Farook Senior came here from Pakistan in the 1980s. That was a good move on his part. Pakistan is real poor: GDP per capita $4,700 in 2014, in between Burma and Honduras, just above Sudan. So Pakistan's a pretty good place to get out of.

Pakistan is of course very disorderly and corrupt. When you talk to a strategy guy about cleaning up Afghanistan, it isn't long before he shakes his head and says, "So long as we can't go after Pakistan, we really can't do much. Pakistan's the real source of the problems up there."

OK, here's the stupidfact: Pakistan has nuclear weapons. How did that happen?

Because we—we, the civilized world—let it, that's how. The Pakistanis exploded their first bomb in 1998, after twenty years' development. We could have stopped it. To do nuclear weapons development needs big facilities drawing masses of power. Even back in the 1980s we had good satellite surveillance and accurate long-range missiles. We could easily have stopped Pakistan's nuclear development. That we didn't, was stupid.

Am I just applying hindsight there? I don't think so. By the late 1980s we knew Islam was a growing problem. We'd seen twenty years of Palestinian terrorism, the Iranian revolution, the Iran-Iraq War, the mujahedin in Afghanistan sticking it to the Soviets…It wasn't hard to figure.

A friend worked on development of the Jupiter missile in the early 1960s, when China was gearing up her nuclear-weapons program. My friend told me there were serious high-level discussions about dropping a Jupiter with a thermonuclear warhead on the Chinese test facilities in Turkestan. The air's clear out there, we had good satellite imaging, and nobody lives out there but a few nomadic goat-herds. At last there was a political decision against the strike, my friend told me, but the possibility was seriously discussed.

All right: 1960s China was big, belligerent, and a possible counterweight to the U.S.S.R. There were good arguments for not squashing their nuclear development. But Pakistan? Who would have cared?

So why didn't we? Of course I'm going to say "stupidity," but I'll allow there was more than that going on. The first half of Pakistan's nuclear development happened in the Cold War with the U.S.S.R., when we had our minds focused on different threats. There was also a Great Game going on in South Asia: India, Pakistan, China, the U.S.S.R, then Russia, and us.

Still I believe there was sufficient stupidity in play to make Pakistan's possession of the bomb a stupidfact—one we might very well pay dearly for some day.