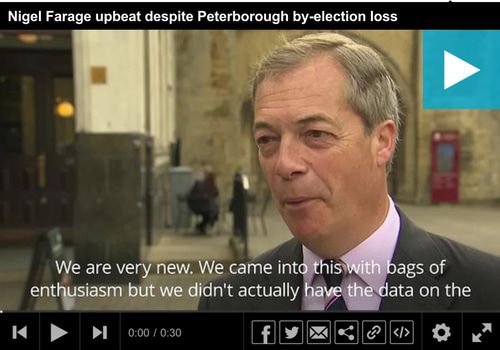 Over in Europe, driven by popular opposition to these floods of Third World moochers, new political parties are coming up all over the place, like crocuses at the end of winter.

Latest instance of this phenomenon is the Brexit Party in Britain. The party is only six months old, but in a special election this week for a parliamentary seat that had gone vacant, the Brexit Party routed the governing Tories and came within a few hundred votes of beating the Labour Party, which has traditionally held the seat. Brexit got just under thirty percent of the vote, Labour got just over thirty percent, the Tories got a tad over twenty percent.

This special election was for the parliamentary seat of Peterborough in the English East Midlands, thirty miles from the town I grew up in. The Peterborough election came just a week after Brexit won a huge plurality of British votes in elections to the European Parliament. The Euro Parliament's a bit of a joke and election results for it are generally dismissed as protest votes; but the Peterborough result shows that the Brexit Party is a serious player.

Nigel Farage, leader of the Brexit Party, would of course rather have gotten those few hundred extra votes and won the seat, but he's talking up the silver lining. The Peterborough result should, he says, wake up Tory voters who favor Brexit to the fact that they're more likely to get what they want in the probably-forthcoming general election by voting for his party rather than for the Tories.

I hope he's right. The Tory Party is useless, and should be destroyed. Then I'd like to see a National Conservative party come up here in the U.S.A. and destroy the GOP, which is likewise useless … but there doesn't seem much prospect of that yet.

The reason for this Peterborough seat being vacant bears glancing at. The former member, Fiona Onasanya, is a black lady of Nigerian parentage. In January this year she was convicted and jailed for "perverting the course of justice"; precisely, for lying about a speeding offense.

There are rather a lot of Africans in Peterborough, and even more Muslims from Pakistan. They all vote solidly Labour, even when the candidate's a crook like Ms Onasanya. I'm willing to bet that if you just could just tally up the legacy white British vote at Peterborough, Brexit would have won by a mile.