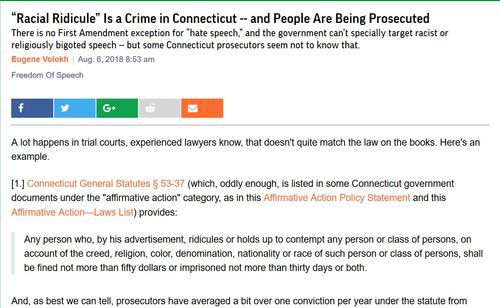 It's surprising to discover how many people—even law-educated people— think there's a "hate speech" exception to the First Amendment, right alongside the exceptions for libel, bribery, and shouting fire in a crowded theater.

But Eugene Volokh has to keep repeating himself. See

There is no First Amendment exception for “hate speech,” and the government can’t specially target racist or religiously bigoted speech -- but some Connecticut prosecutors seem not to know that.

And prosecutors in Connecticut apparently need to be paying attention to him.

At one point in his piece Volokh asks why defense attorneys aren't kicking up more of a fuss, and I have a thought.

As with, say, many defenses that would be available for firearms offenses, your average criminal defense attorney is a flaming liberal who abhors guns in any event and thinks nobody should have them. So, in defending a client with gun charges, the creative muse doesn't pay a visit.

Maybe the same lack of inspiration affects them when their client is facing a "racial incitement" charge in Connecticut.