John Derbyshire: No, Loretta Lynch, Love Is NOT The Answer To Muslim Massacres. The Answer: End Muslim Immigration. (Ask Trump).

Another day, another Muslim massacre. When Radio Derb went to tape, the week's big story was the terrorist attack on Istanbul airport   on Tuesday—three terrorists, Muslim of course, who all died in the attack, a further 45-odd innocents dead. But then on Friday there was the Dhaka, Bangladesh attack (28 dead). And on Saturday, another Baghdad bombing (125-odd dead).

So what do we do about Muslim massacres? 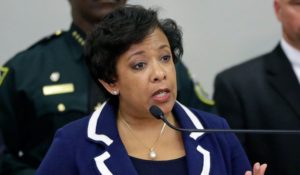 Our lady Attorney General, Loretta Lynch, says actual quote: "Our most effective response to terror is compassion, it's unity and it's love." [Loretta Lynch: ‘Most effective’ response to Islamic terrorism ‘is love’, By Douglas Ernst,  Washington Times,June 21, 2016]

All you need is love!

That was in Orlando, Florida, whither this career Social Justice Warrior and Harvard Law School Affirmative Action Baby had gone to investigate the mass killingof homosexuals by yet another Muslim.

Ms. Lynch further opined that— I'm not making this up, truly I'm not —"The message of Orlando is a message of determination to remove hatred, to remove intolerance from our midst."

The answer to that hate, says the A-G, can only be love. What else is there?

Well, there are visa restrictions, secure borders, immigration moratoria etc.  But those aren't the Attorney General's thing. Love and hate are her things.

These people have the brains of eight-year-olds.

Seeking further instruction, I read through the opinions offered after Istanbul by "a panel of terrorism experts" in the New York Post. What do these experts suggest?

Boot says we need to get more militarily involved—more air strikes, more infantry, and under looser rules of engagement. [Obama won’t stop ISIS—but here’s how his successor can, By Max Boot, June 29, 2016] Also we should "topple"—that's Boot's word—we should topple the Syrian dictator Bashar al-Assad, who is a very, very bad person. No mention from Boot about how the Russians might feel about that. 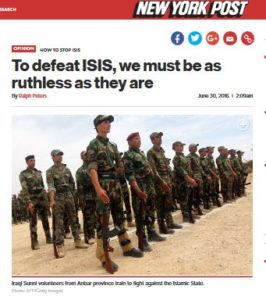 Col. Peters advocates ruthlessness "equal to that of our enemies." He thinks we should loosen up on worrying about collateral damage: "Civilization cannot be saved solely by civilized means." [To defeat ISIS, we must be as ruthless as they are, By Ralph Peters, June 30, 2016 ]

So there are two voices for getting Roman with the jihadists. Who else we got?

McCarthy [Tweet him] wants us to be proactive against radical Muslim ideology: "Domestically, we must reject a counterterrorism strategy that focuses only on action to the exclusion of ideology. Radicalism must trigger investigative attention." [ To defeat ISIS, America must target Sharia ideology, By Andrew C. McCarthy, June 29, 2016]

Well, at least someone's talking about the domestic scene.

The important thing, says he, is to seal the border. Well, yay … Oh, wait a minute: he means Turkey's border with Syria!  "Our immediate task is to push the Turks to completely seal the southeastern border."[Airport attack should have come as no surprise to Turkey, by Jonathan Schanzer, June 30, 2016] 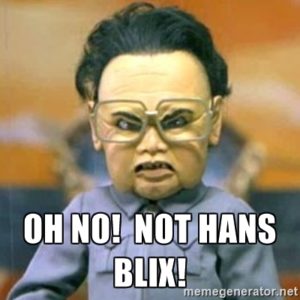 Yes, that's our immediate task, according to Schanzer. We've got to push those Turks to seal their border! Or else! [Team America clip:  Kim Jong Il—"Or else what?"  Hans Blix—"Or else we will be very, very angry with you, and we will write you a letter telling you how angry we are."]

[A]cknowledge the role that existing mainstream opposition groups will need to play in assuming at least a shared responsibility for protecting Sunni Arab-populated territory captured from ISIS.

So, a words guy, then. You can tell he writes terrific memoranda, lotsa bullet points.

“Mainstream opposition groups”? What, like that military training program we've been running, that was supposed to produce 5½ thousand warriors by the end of last year, but when they did the actual head count had trained only, quote from our own Defense Department, "four or five," at a cost of $41 million?

So those are prescriptions from our five experts. To boil them down:

Is it disrespectful of me to not be impressed by these experts? All right, the New York Post is a neocon paper—Invade The World, Invite The World. I guess you have to expect their panel of experts will lean that way.

And I'm not actually opposed to getting Roman when it's called for, if only we'd be serious about it. Hey, I'm the guy who coined the phrase "Rubble doesn't make trouble." [Breeding Terrorism, NRO’s Corner, August 10, 2006]

That is all secondary, though. It's small stuff, and arguable. There are great big fat things we need to do, and they are not arguable:

First, we don't need any more people. A third of a billion is enough. Permanent settlement visas should be for spouses and dependent children of U.S. Citizens, certified geniuses, persons who've performed some meritorious service to U.S. policy goals, a few Solzhenitsyn-type high-profile dissidents, and nobody else at all.

Second, other visa categories—students, businessmen, tourists—need to be limited, and entry and exit properly tracked. With modern data management technology, this could easily be done.

Muslims, other than diplomats and heads of state, should not get visas. That includes Muslim refugees. There are 49 majority-Muslim countries, some of them very rich. Let them look after their own people.

Third, we need close supervision of mosques, as Andy McCarthy says. Radical Muslim preachers who are not citizens, need to be expelled. Those who are citizens should be bribed to renounce their citizenship, and their mosques should anyway be closed as a danger to the Republic.

Don't tell me about the First Amendment. The Constitution is not a suicide pact.

Manage settlement; manage inflow and outflow; manage our borders; manage visa issuance and tracking; watch the mosques. Those are great big fat things we need to do.

It's a shame that Muslims are hacking each other's heads off five thousand miles away. But the impact of that on us could easily be reduced to zero, or way closer to zero than is currently the case.

The means are there, waiting to be used. We just need the will.

Right now, the amazing fact is that only Donald Trump seems to realize this—and have the will.