In addition to summer school, I’m teaching test prep all day Saturday, with populations very like the enrichment classes I taught until last year: 99% 1st or 2nd generation Asian.

“I need a Saturday off over the 4th of July. Is there anyone here who absolutely can’t meet on a Sunday to make up that session?” The kids all seemed fine with it.

“Besides, look at the bright side–you’ll get the whole fourth of July weekend off!”

Yun snorted. “I’m not American. It’s not my holiday.”

I stopped cold. Just looked at him. And waited.

“It’s not me, it’s my parents. They weren’t born here; they don’t care about that.”

“Were you born here?”

I looked at the class.

“How many of you were born here?”

Most of the hands went up.

“How many of you know what the Fourth of July is, much less celebrate it?”

All of the hands went down.

“Yeah. You all SUCK. Do it different this year.”

They all looked abashed.

Read the whole thing—it's a cure for immigration romanticism. It makes the point that immigration enthusiasts like anti-Trump Republican commentator Joe Scarborough, who says that "Muslim Americans have successfully integrated into this country better than any non-Muslim country in the world. They're pursuing the American dream" and Republican speaker Paul Ryan who "represents a district that’s 91% white, ahead of the [Wisconsin's] ’s 86% white average" simply don't know many immigrants.

Also, people like Omar Mateen ( "not an immigrant," because "born here") and Judge Curiel ("not a Mexican" because "born in Indiana") may have American citizenship, but they don't think of themselves as Americans. Ed did discover one second-generation American who did think of himself as an American:

Chuy broke in, “Yeah! Go Trump!” and beamed at me approvingly.

Daniel was shocked. (Truth be told, I almost fell out of my chair.) “What? How can you like Trump? He wants to deport Mexicans.”

“Then what do you care? They can go back home. Trump’s strong. This country needs someone strong and tough. I like him.”

Kids like Chuy are rare among the "children of immigrants" population, but they do exist, and I expect Chuy to be celebrating the Fourth of July like any other American.

Speaking of of which... 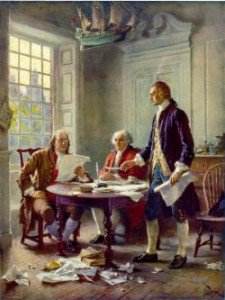 John Adams, discussing the vote that had just been taken by the Continental Congress in favor of independence, said that he believed—and he was correct—that the Declaration Of Independence would be

“celebrated by succeeding generations as the great anniversary festival. It ought to be solemnized with pomp and parade, with shows, games, sports, guns, bells, bonfires and illuminations from one end of this Continent to the other from this time forward forever more.”

By “guns” he meant saluting guns loaded with blank charges—firing loaded guns in the air is more of a Cinco De Mayo kind of thing.

We also celebrate Fourth of July at VDARE.com with a roundup of Independence Day Columns.