I write this article from Mexico, where the Trump-trashing continues—with a few surprising exceptions!

ANTI-TRUMP ARTWORK ON THE BORDER

The gruesome caricature features Trump with a brick (entitled “Mexico”) in one hand and a trowel in the other, attacking his proposal of building a border wall.

The nine-meter high illustration is visible to border crossers, and Excelsior claims that

… [I]t seeks to arouse consciences over the impact that the arrival of Trump to the presidency would have on the image of Latinos and Mexicans in the United States.

Some text located right under the title takes it even further, claiming “through the mural an urban artist makes a call to the conscience of the American voters so that they do not support the discourses of the Republican that support violence against Mexicans.”

How is Trump’s discourse “promoting violence against Mexicans”? How about the violence perpetrated against Trump supporters?

Ironically, the artist who produced this masterpiece calls himself “Sin Sentido”—Spanish for “without sense”. 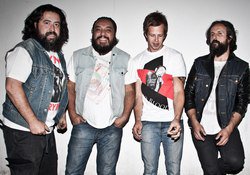 Molotov is a Mexican rap metal group (with an American drummer, Randy Ebright, who is a naturalized Mexican) of whom I’m written before.

The boys in Molotov think it’s evil for the U.S. to control its own border, so unsurprisingly, they are anti-Trump. While on tour, they attacked Trump from the Canary Islands, Spain.

Anyway, these political scholars forecast that a Trump victory “could generate a civil conflict in the United States.” They also said of Americans, “not everybody is [racist], but many are.”

They claimed “los más mierdas” [the biggest turds] are people with Spanish surnames “who work in migration.” In other words, Molotov hates Mexican-Americans who work in the Border Patrol, of whom there are many.

Thanks for letting us know where you stand, guys.

Kate del Castillo is a rich white Mexican movie actress who became a U.S. citizen this past September while maintaining her Mexican citizenship (in contravention of the naturalization oath, but the Supreme Court legislated that away in Afroyim vs. Rusk).

Del Castillo is also a friend of Sinaloa Cartel Drug Lord Joaquin “el Chapo” Guzman. While el Chapo was still at large, before his most recent capture, she set up a bizarre meeting between the drug lord, herself and Hollywood movie star Sean Penn.

Miss Del Castillo’s motivations for American citizenship are similar to that of other notorious dual citizens like Salma Hayek and Thalia: they say they intend to use their new status to advocate for Mexicans.

As you might expect, Kate del Castillo had nothing to say about how great it was to become an American. Instead, she used her naturalization ceremony to attack Donald Trump.

She published a photo of herself taking her naturalization oath, along with this message to Trump:

That was back in September, and Del Castillo hasn’t given up on her anti-Trump crusade. Lately she’s been sending out anti-Trump tweets—in Spanish. For example:

“How is it possible that there exists the entry of a Presidential candidate with Hitlerian beliefs, a warlike man who, without even being in the supreme power as president of the United States, has already done so much damage. Irreversible damage. It is absurd but real …a man that focuses more on punishment and segregation than in pardon and union. Zero tolerance….Nothing more dangerous than an ignorant and insecure president.

Isn’t it great that Kate del Castillo is now your “fellow American?”

Did we have a shortage of self-centered movie star activists, requiring us to import more?

EMIGRATE TO THE U.S., GET A HOUSE IN MEXICO

But they didn’t sign it in Mexico City, or any other city in Mexico. It was signed in Phoenix, Arizona—in the presence of “representatives of the Mexican community in that nation [the U.S.].”

The agreement is about “uniting forces to improve the life of some 5,000 Mexican families of ‘connacionales’ in Mexican territory.” (The term connacionales—“fellow nationals”—is a common term for Mexicans in the United States.

The Construye en tu Tierra (“Construct on your Land”) program will help Mexicans in the U.S., legal status unspecified, build houses for their relatives back in Mexico. This program is actually a newer, bigger version of one with a different name that ran from 2005 to 2015.

On the positive side, these houses are being constructed in Mexico. On the negative side, it can be yet another incentive to illegally immigrate. It’s like saying, move to the U.S. and get a house for your family in Mexico.

THERE ARE MEXICAN PUNDITS WHO DON’T GO APOPLETIC OVER TRUMP! 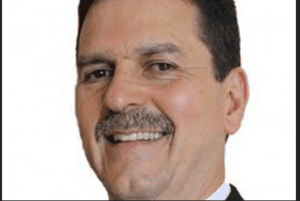 While in Mexico, I’ve actually encountered a few writers here capable of analyzing him without devolving into hysteria.

It dealt with the Orlando shooting and Islamic terrorism. Its first sentence:

The United States finds itself in an impasse in the fight against domestic terrorism, especially due to the erratic and dreamy [i.e. unrealistic] leadership of its president Barack Obama.

Now, Healey agreed with Obama on the gun thing. But on the not letting in Muslims thing, he thought Trump has the better argument (!):

Closing the borders to Muslims would not stop terrorism (at least in the short run) but it would send a firm message to the foreign enemies of the United States that sadly abound, especially in the countries of the Middle East.

Healey even faulted Obama for “denying the problem, postponing its solution and, to top it all off, politicizing it for electoral reasons.” And in conclusion, Healey said the U.S. has just as much right to be vigilant of Muslim immigration as Mexico has been for the past few decades.

Healey is not a Trump fan and was not writing in this column about Mexican emigration to the U.S. But it’s significant this Mexican columnist agreed with Trump over Obama on Muslims. In fact, Healey notes of Trump “At least he is authentic and transparent in his proposals.”