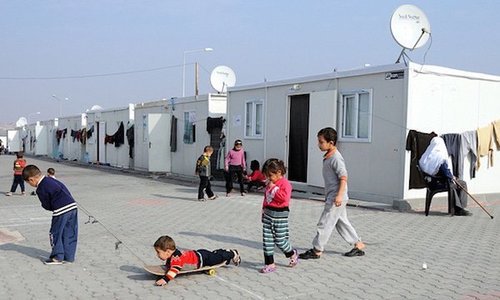 Turkey may wish that the resident hordes of Syrians would go to Europe and relieve it of the trouble of caring for them. Nevertheless, Syrians living in the Nizip Refugee Camp report that they have been treated very well and aren’t pining for the attractions of Europe. The camp illustrates how Syrian war refugees and economic migrants can be successfully housed in the region.

Somebody should tell German Chancellor Angela Merkel and other do-gooders that it isn’t Europe’s or America’s responsibility to rescue the collateral damage from Islam’s latest intramural scrap. The whole Middle East mess is just Muslims being Muslims. Islam was spread by the sword throughout its history, and when Muslims aren’t killing infidels, they concentrate on each other. For example, during the Iran-Iraq War in the 1980s, some estimate a million may have been killed in the Sunni-Shia dustup. Muslims should be quarantined in the Dar al Islam, not imported into western communities,

For this reason and others, America’s Senator Jeff Sessions recently remarked, “Middle Eastern nations should assume the primary task of absorbing this wave of refugees.  Our guiding principle should be to help assist in the placement of refugees as close to their homes as possible, and to take such action as we are able to aid their return home in a stable situation.”

Syrians in the Nizip Refugee Camp are thankful for Turkey’s open-handed hospitality. For one thing, the 10,500 people in Nizip, around 50km from the Syrian border, don’t feel so far from the war-rocked homes they fled, mostly in 2012.

A young man told us confidently: “We are staying here temporarily, until the crisis in Syria is resolved, and then we will go home. There are no problems here. We are safe here.”

The Turkish government, which manages Nizip, gives families a debit card they can use to buy market goods inside the camp. All the refugees are registered, and are authorised to leave the camp from 3-7pm each day, and may work outside it. There are also two schools and an infirmary.

Resident Taha Mendu told us: “Some of my friends left just after Ramadan. There were also some young people who wanted to follow them, but then they realised that there was a conspiracy to empty Syria of its population.”

We asked Mendu, who is originally from Idlib, a key battle ground in Syria, what he thought of fellow Syrians heading off for the uncertainties of Europe.

He said: “Instead of leaving for Europe, we need to return to Syria to defend our land and our sacred places.”

Another resident said: “None of my friends have left, but 150 people or so did leave for Europe, even though life here is comfortable. Turkey has given Syrians what no other country has, whether Arab or a friend of Syria.”

The tents have satellite dishes and electricity provided. Many refugees have planted vegetable gardens. There are lots of children, some of them born in Turkey.

Our correspondent Bora Bayraktar summed up: “Very few of the refugees housed in these camps in Turkey have left to try to reach Europe. Most of their needs are provided for here. But only one tenth of the two million refugees that Turkey is harbouring live in the camps. Most of the people moving on are from outside the camps.