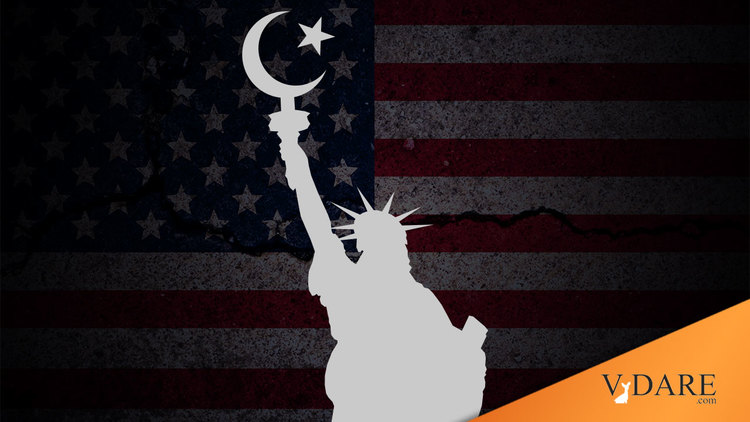 Earlier (2017) by John Derbyshire: Absimilation On Westminster Bridge: The Japanese Were Right. The British Were Wrong.

Some  thoughts on a headline from the week’s news.

The news headline I want to pass comment on is the assault on author Salman Rushdie in Chautauqua, New York last Friday.

I reiterate my call for a National Immigration Safety Board modeled on the National Transportation Safety Board. We have the resources to investigate how the immigration system screwed up to admit the most outrageous cases @Steve_Sailer https://t.co/KF8f6aipdo

The assailant was a 24-year-old American native of Arab parentage named Hadi Matar. We’re told that Matar’s parents came here from South Lebanon, so it’s a fair bet they are Shi’ite Muslims, with fond affection for the clerical Shi’ite government of Iran.

That government it was that, in 1989, issued a fatwa—a sentence of death in absentia—against Salman Rushdie for having written unflattering things about the prophet Mohammed in his novel The Satanic Verses.

Iranian leaders have backed off some from the official fatwa but there is still a price on Rushdie’s head from various Muslim-fundamentalist organizations—three million dollars from one of them.

He attacked with a knife, stabbing Rushdie several times, causing severe injuries. Last I’ve heard, the 75-year-old Rushdie is off the ventilator, on the mend, and in good spirits, although he’s probably going to lose an eye.

A couple of interesting points here.

First point. As my colleague Eugene Gant noted at VDARE.com on Monday, the perp here, Hadi Matar, is an instance of absimilation.

I’ve been trying to get this word into general circulation since I coined it in my spacetime-sundering bestseller We Are Doomed back in 2009. Hope springs eternal, so here I am trying again.

Quote from Chapter Ten of We Are Doomed:

The English word ”assimilation” derives from the Latin prefix ad-, which indicates a moving towards something, and the same language’s verb simulare, ”to cause a person or thing to resemble another.” You can make a precisely opposite word using the prefix ab-, which marks a moving away from something. Many immigrants of course assimilate to American society. I think I have. I hope I have; I’ve tried to. Many others, however, especially in the second and following generations, absimilate.

The byline says he is senior vice president for research at the Foundation for Defense of Democracies. I am vaguely aware of that foundation as a hardcore neocon outfit, and this column of Schanzer’s has some neocon coloring, but it makes an interesting point none the less.

Here’s the point. The Soviet Union went in to Afghanistan at the end of 1979 with the idea to impose a government and social system there more to their liking. After ten years grinding away, they gave up and pulled out in May 1989.

Schanzer argues, with supporting evidence, that the Soviet failure gave a huge morale boost to Islamic fundamentalism all over: Sudan, Tunisia, Jordan, Palestine, Pakistan, and the Muslim diaspora in Europe and the U.S.A. He then asks

Could the President Biden administration’s disastrous withdrawal from Afghanistan last year create a similar domino effect? Could the propaganda victory the Taliban achieved in 2021 encourage Islamic extremism in other nations just like it did 32 years ago?

[A victorious Taliban is inspiring a new generation of Islamic extremists, August 15, 2022]

Schanzer thinks it could.

Are we living a repeat of 1989? Sure seems like it. My thoughts here in ⁦@NYPostOpinion⁩ https://t.co/VyQnrWhhHB

He offers some reasons for thinking so, one of them being this assault on Salman Rushdie.

I’m not a fan of neoconnery in general, but this guy may have a point.

I suppose it makes sense to somebody, but it sure makes none to me.

And then I read that the number of illegals arrested at our southern border is on course to exceed two million for this fiscal year, the most ever. That’s just the number arrested, mind. Who knows how many have snuck in un-arrested?

I read; I reflect; I wonder.