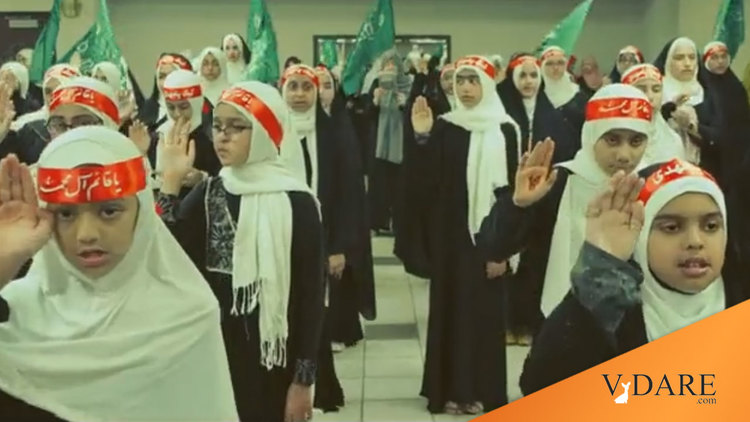 Will A Future “Home-Grown” Terrorist Be Raised In Houston? Video Suggests The Answer Is Yes

More good news from the diversity-is-our-strength beat: Shi’a Muslim kids in Houston are singing allegiance to Ayatollah Ali Khamenei, the Supreme Leader of Iran. The wee Mohammedans also sing of martyrdom with such lyrics as “Don’t look at my young age,” “I will be your soldier,” “I make an oath. One day when you need me, I will be your martyr.”

They sing "Don't look at my young age" "I will be your soldier" "I make an oath. One day when you need me, I will be your martyr" pic.twitter.com/fYGZJOQ2es

But all that’s nothing to worry about, a Shi’a Muslim political science professor assured an earnest scribe for the Houston Chronicle. The real worry isn’t that one of the diminutive fanatics will grow up to blow up a building. Rather, it’s the ever-menacing “Islamophobia” and ensuing backlash the video will create.

“Some people could see it as some kind of soft power,” the University of Houston’s Cyrus Contractor told the Chronicle’s  Elizabeth Trovall [Inside the viral video trend that made Houston-area school children the face of Iranian propaganda, July 30, 2022]. “The video called ‘Salam Farmandeh’ or ‘Salutations, commander’ carries more of a religious message than a political one.”

That’s reassuring! And completely unlike the message Islamic terrorists send when they scream “Allahu Akbar” as they commit mass murder.

To her credit, Trovall included comments from skeptic with a more level-headed opinion, but Contractor got the last word:

Contractor, who is a member of Houston’s Shia Muslim community, said in the Shia religious context, the words of the song are metaphorical. It is about standing for righteousness and good against all odds—rather than recruiting actual child martyrs. …

[C]ritics who are labeling the Houston video “dangerous” may actually be stoking Islamophobia.

“It feeds into all kinds of Orientalist perceptions of what Islam is... and that these kids are somehow automatons that are that are being used by their parents,” said Contractor.

Tell that to the victims of Nidal Hasan, Omar Mateen, Naveed Afzul Haq, and the other Muslims whose loyalty to Allah the Moon God supersedes their loyalty to the United States of America.