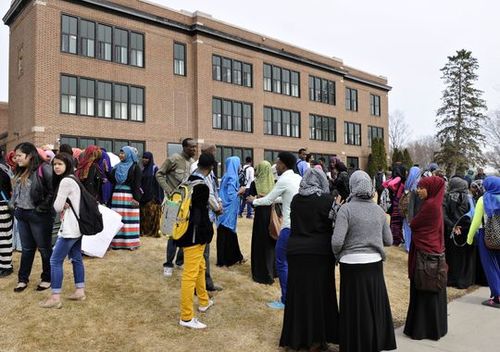 Above, Somalis in Minnesota protest outside a school.

At a current blog entry here at VDARE.com, John Derbyshire talked up his useful coinage "absimilation" for the opposite of assimilation, a widely-visible phenomenon among second-generation immigrants (i.e. the offspring of actual immigrants) from Third World societies in Western nations.  Summing up, Derb wrote:

First-generation immigrants from anywhere will mostly ? though not, of course, exclusively ? express gratitude.  With subsequent generations, especially those from low-human-capital groups, resentment is more characteristic.

It's important to keep this fact-of-current-life in mind when people who know essentially nothing about immigration ignorantly gush about the wonders of assimilation.  To reinforce the idea, here's a highly pertinent explanation of it from the always-quotable Thomas Sowell:

There is the second-generation phenomenon. You have people who move in from some poor country — the Middle East, Mexico, whatever. Those people may be very glad to be in the United States or Britain or wherever they may be. But then they have children. And their children have never seen those other places; they’ve never lived that poorer life. All they know is that the population around them is a hell of a lot more prosperous than they are. And there are all sorts of ideologues and hustlers ready to tell them that it’s society’s fault that they don’t have what other people have. This then gives you the people who hate the country in which they live.

Sowell really hit the nail on the head with that.  An illustration of his insight is contained right there in Derb's current article, within an excerpt Derb used from today's [London] Daily Telegraph.  The Telegraph quotes a second-generation Iraqi in Sweden:

“They (our parents) compare [Sweden] to Baghdad or Somalia,” he said. “But we younger immigrants only really know Sweden, and we just compare our situation to the one around us.”

Derb was already writing about the systematic unpleasantness of the second generation from the Third World way back on May 31, 2001 in his unforgettable The Island Race ... Riots:, which was spurred by contemporary inter-ethnic violence in England:

The first generation of south Asian immigrants had the physique of people raised on a subsistence diet, and the manners of those who, to survive at all, have had to fawn and scrape for centuries before callous, arrogant landlords and bureaucrats. When I started doing office work in London, the companies were full of Indian bookkeepers who had to be restrained by force from beginning their business letters: "Esteemed Sir … " and ending them: "I beg to remain, esteemed Sir, with consideration, you most humble, most obedient servant … " Their children (who are sometimes called "boscos" from the census-taker's category: "British, of Sub-Continental Origin"), raised on an ample diet, tower over them, and are physically a match for any gang of white English skinheads. Products of modern western culture and an educational system steeped in psychobabble, they esteem no-one but themselves.