Affirmative action didn't start in the 1960's. It goes back much farther than that. What confuses people is that it used to be called “political corruption.”

In the 1890's the "spoils system" allowed the winning party to get jobs for their loyal partisans. Tax money taken from members of all parties was used to pay the salaries of members of one party.

Civil service reform finished that. For many years, when blacks had no political clout whatsoever, the Federal Civil Service was a place where they could get jobs when white employers refused to hire them. 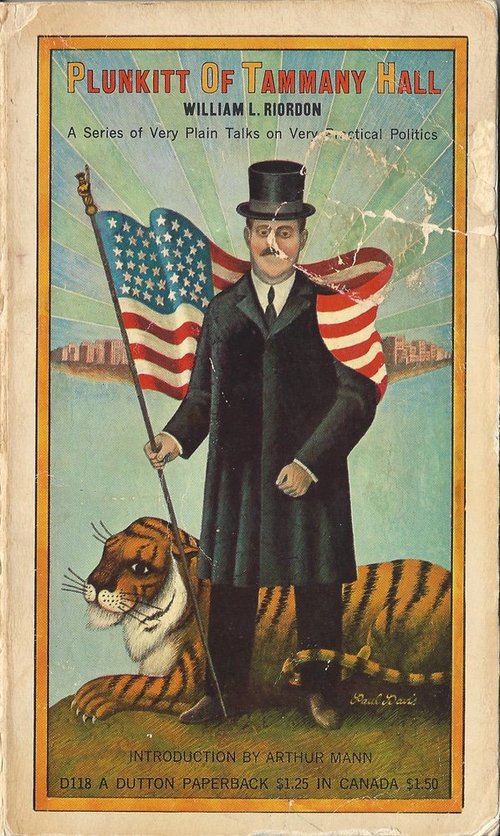 Therefore, it's not surprising that the Dems would support jobs for African-Americans – on the same principle that nineteenth century minority (Irish-American) politician George Washington Plunkitt supported city jobs for loyal campaign workers from his Fifteenth Assembly District.

Plunkitt was strongly critical of Civil Service reform. In the classic "Plunkitt of Tammany Hall" he said:

“This civil service law is the biggest fraud of the age. It is the curse of the nation. There can't be no real patriotism while it lasts. How are you goin' to interest our young men in their country if you have no offices to give them when they work for their party?”

Plunkitt was equally critical of the use of standardized tests to determine who was best qualified:

“Isn't it enough to make a man sour on his country when he wants to serve it and won't be allowed unless he answers a lot of fool questions about the number of cubic inches of water in the Atlantic and the quality of sand in the Sahara desert?”

He also felt, like modern-day minority activists, that if his young men didn't get jobs, they were likely to engage in revolutionary violence. He even claimed that civil service reform had produced an Irish-American Taliban John:

After the battle of San Juan Hill, the Americans found a dead man with a light complexion, red hair and blue eyes. They could see he wasn't a Spaniard, although he had on a Spanish uniform. Several officers looked him over, and then a private of the Seventy-first Regiment saw him and yelled, "Good Lord, that's Flaherty." That man grew up in my district, and he was once the most patriotic American boy on the West Side…

Now, how did he come to be lying dead with a Spanish uniform on?…Well, in the municipal campaign of 1897, that young man, chockful of patriotism, worked day and night for the Tammany ticket. Tammany won, and the young man determined to devote his life to the service of the city. He picked out a place that would suit him, and sent in his application to the head of department. He got a reply that he must take a civil service examination to get the place. He didn't know what these examinations were, so he went, all lighthearted, to the Civil Service Board. He read the questions about the mummies, the bird on the iron, and all the other fool questions – and he left that office an enemy of the country that he had loved so well.

Plunkitt is long dead, although something of his spirit lives on in his old district, where the McManus Midtown Democratic Association still holds court on Mondays and Thursdays.

But today, immigration-enhanced diversity has given the Democrats a new way around civil service reform. They now apply the idea of affirmative action not only to Civil Service jobs, which are supposed to be controlled by the government, but also to every employer with more than 15 employees. They can now secure jobs for their party loyalists from the general public!

Both Republican taxpayers and Republican employers are finding their money used to reward minorities for voting the straight Democratic ticket.

Democrats may not even consciously know what they're doing, but simply be sincere believers in " special privileges" for minorities. Plunkitt sincerely believed that democracy meant that he'd been elected to get city jobs for his followers:

“What is representative government, anyhow? Is it all a fake that this is a government of the people, by the people and for the people? If it isn't a fake, then why isn't the people's voice obeyed and Tammany men put in all the offices?”

Of course, affirmative action has never actually been put to a popular vote. The history of affirmative action shows that it has frequently been a bipartisan initiative, pushed by Republicans as well as Democrats. And when something's bipartisan, there's no way you can vote against it.

While the Democrats are unlikely to change their beliefs on affirmative action anytime soon, Republicans should start to look at the fact that these laws have a "disparate impact" on Republican voters.

The idea of fairness in employment whether in Government or private industry, should not only apply to ethnic groups, but to political parties as well.

President Bush's compassionate conservatism has found compassion for illegal aliens, for minorities, for the poor.

Perhaps Bush could find compassion even for Republicans?