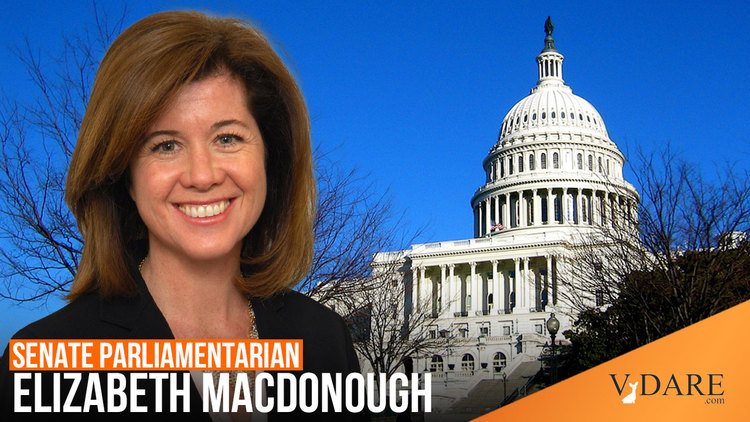 The House passed President Biden’s much-desired infrastructure plan late Friday night, November 5, thanks to 13 Republicans. You read that right. A Dirty Baker’s Dozen saved Biden’s disastrous agenda. The $1.2 trillion infrastructure bill mostly supports Leftist projects such as “racial equity” in broadband access and grants to cities that eliminate single-family zoning. Six progressive Democrats also voted against it, believing it must be paired with the “Build Back Better” budget bill [In Infrastructure Votes, 19 Members Broke With Their Party, by Luke Broadwater and Zach Montague, New York Times, November 6, 2021]. The infrastructure bill now heads to Biden, clearing the way for the next battle, over the “Build Back Better” Amnesty Trojan Horse Budget bill. It would legalize millions of illegal aliens and make it easier for foreigners to obtain green cards. Question is, does passing the infrastructure bill doom or help the budget measure?

To review: Democrat leaders and progressives wanted the infrastructure and budget bills passed concomitantly. Moderates balked and demanded delay until the Congressional Budget Office scored the budget bill. Moderates are wary of it not because of its immigration provisions, but because it costs too much and will raise taxes substantially. The budget bill’s price tag was lowered from $3.1 trillion to $1.85 trillion to allay moderate concerns, but they remain unconvinced.

Here’s why: Democrat leaders and most progressives had reluctantly agreed with moderate demands and allowed a vote on the infrastructure bill [House Passes Infrastructure Bill, Postpones Vote On Build Back Better, by Igor Bobic, HuffPost, November 6, 2021]. But passage doesn’t mean moderates will support the budget bill. They’re no longer beholden to vote for it to pass their preferred infrastructure bill. Having seen the election results from Virginia, moderates might fear a red wave in 2022’s midterm elections will cost them their seats. Or course, these moderates don’t worry about the immigration provisions because they are bad policy. Rather, they fear that legalizing millions of illegals, and voting for a massive tax and spending increase, will ruin them in battleground districts. Thus, enough moderates could see CBO’s review as a pretext for a no vote.

The measure has other problems beside lukewarm support from moderates. It might not be able legalize illegals after all. The rules permit the Senate to pass a bill with a simple majority if Senate Parliamentarian Elizabeth MacDonough says it strictly pertains to the budget. She has already nixed two Amnesty proposals on the grounds that they were unrelated to the budget. The first gave at least 8 million illegals a pathway to citizenship. The second updated the immigration registry to legalize all illegal immigrants who arrived in the U.S. prior to 2011 and allow them to apply for a green card.

The Democrats’ new proposal, which awaits MacDonough’s approval, no longer includes a green card and hence a “pathway to citizenship.” Instead, it grants illegal aliens who arrived in the U.S. prior to 2011 “parole” and allows them to apply for a 10-year work permit to stay in the country legally. Democrat moderates who insist on MacDonough’s OK support the idea. But progressives insist on the registry proposal and a pathway to citizenship. They want party chieftains to overrule MacDonough if necessary.

As I wrote last week, House Speaker Nancy Pelosi might include the registry proposal in the bill as a placeholder to reach a deal within her caucus as they await the parliamentarian’s ruling on the parole. Progressives tell the press that Pelosi is still open to keeping a pathway to citizenship in the bill, even though MacDonough has clearly ruled against it [Divisions among Democrats threaten immigration plan, by Caroline Simon and Suzanne Monyak, Roll Call, November 3, 2021].

If MacDonough shoots down the parole, that could bolster the progressive position to override her opinions and keep the pathway to citizenship. In turn, moderates might then oppose the move. Yet bill backers risk losing progressive support if the bill does not include an Amnesty.

So a lot hinges on how MacDonough rules on the parole proposal. Based on her past decisions, it appears unlikely she will rule in favor of another Amnesty that has nothing to do with the budget. That’s because Democrats have only watered down their Amnesty rather than make it pertain to the budget, a near impossible task.

Amnesty is, of course, not the bill’s only problem. It also increases legal immigration, a fact mostly ignored by the media. The budget bill would “recapture” up to 400,000 unclaimed green cards from years past and give them to foreigners, which will substantially increase immigration without raising the number of green cards awarded annually, according to the Democrats [Democrats Push Fix for Green-Card Logjam in Social-Spending Bill, by Michelle Hackman, Wall Street Journal, November 5, 2021]. They claim they need to hand out these green cards because at least 4 million foreigners await a green card.

MacDonough has not shot this proposal down and has differentiated it from Amnesty. However, she still needs to approve it, and that’s no sure thing. Democrats appear confident, but some worry the provision will look bad without Amnesty. New Jersey Sen. Bob Menendez says it will appear that Democrats are rewarding business interests over that of illegal aliens.

As with all Democratic legislation, the budget bill includes the usual racial graft. Billions are set aside for blacks [Black America to receive billions from Biden’s BBB plan, by April Ryan, The Grio, November 5, 2021]:

White taxpayers, who have seen no returns on past giveaways to blacks, are on the hook for most of it.

The Build Back Better budget bill will be cataclysmic if it passes. Whether that happens is up to the Democrats. It remains to be seen if the 13 Republicans who voted for infrastructure helped.

So much depends on MacDonough. If she rules in favor of parole and the CBO finds the budget bill doesn’t exceed its $1.85 trillion price tag, the bill will probably clear the House. If either fails to go in the direction moderates want, it hinders the chances for passage.

Those 13 Republicans had no reason to help President Biden’s agenda. If they had all voted no, they could have killed both bills. Now they can only hope that the budget bill dies.

Democrats want Amnesty more than anything else in the budget bill. If MacDonough takes that away, it might finally be finished.