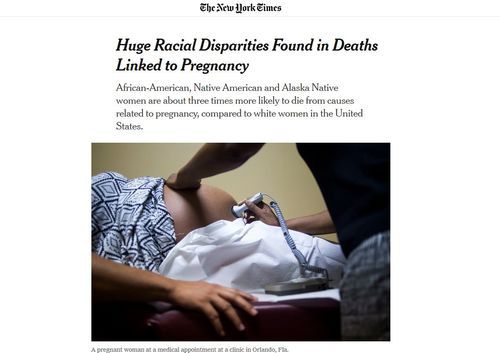 African-American, Native American and Alaska Native women are about three times more likely to die from causes related to pregnancy, compared to white women in the United States.

African-American, Native American and Alaska Native women die of pregnancy-related causes at a rate about three times higher than those of white women, the Centers for Disease Control and Prevention reported on Tuesday. …

Maternal health among black women already has emerged as an issue in the 2020 presidential campaign. Senator Kamala Harris, Democrat of California, and Senator Elizabeth Warren, Democrat of Massachusetts, have both raised the glaring racial discrepancies in maternal outcomes on the campaign trail.

“Everyone should be outraged this is happening in America,” Ms. Harris recently said on Twitter. She blamed the deaths on racial bias in the health system.

The American College of Obstetricians and Gynecologists, which was not involved in the C.D.C. report, recently acknowledged that racial bias within the health care system is contributing to the disproportionate number of pregnancy-related deaths among minority women.

“We are missing opportunities to identify risk factors prior to pregnancy, and there are often delays in recognizing symptoms during pregnancy and postpartum, particularly for black women,” Dr. Lisa Hollier, immediate past president of the American College of Obstetricians and Gynecologists, said in a statement.

The United States has an abysmal record on maternal health, compared with other high-income countries. Even as maternal death rates fell by more than one-third from 2000 to 2015 across the world, outcomes for American mothers worsened, according to Unicef.

Looking at the data, my guess would be that the successful federal campaign against teen pregnancies has driven up the maternal death rate, because a higher percentage of births are now to women over 35, who are several times more vulnerable than younger women.

Indeed, a greater proportion of the deaths among black women occurred in the later postpartum period, between seven weeks and a year after the delivery, compared with white women, the C.D.C. found.

… African-American women have higher rates of obesity and are more often overweight, which can increase the potential for problems during pregnancy and beyond. Yet obesity has risen among all Americans, noted Dr. Elliott Main, medical director of the California Maternal Quality Care Collaborative.

Overall, maternal deaths are rare: Some 700 deaths related to pregnancy occur each year, while there are 3.8 million births.

This article would be less racially inflammatory if instead of using white women as the denominator, it grouped American women into High maternal mortality ethnicities (black and Native American) versus Low mortality ethnicities (Hispanic, white, and Asian). Here are the stats from the CDC for pregnancy related mortality ratio per 100,000 births

So, it’s not some kind of white racist conspiracy to kill nonwhite mothers.