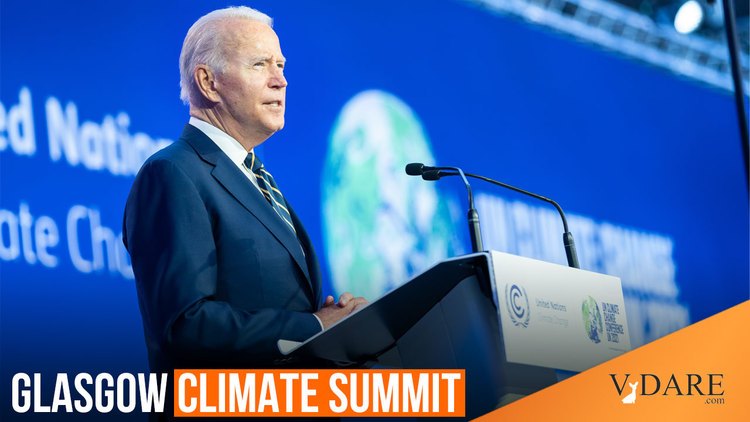 At the end of the first week of the Glasgow climate summit, 100,000 protesters marched to denounce the attendees as phonies who will never honor their commitments to curb carbon emissions.

Despite pledges by 100 nations to reduce methane emissions by 30% by 2030, and by 20 nations, including the U.S., to end financing of new international fossil-fuel power plants, teenage climate superstar activist Greta Thunberg says the COP26 summit is a con:

Thunberg has a point.

Commitments made in Scotland are not binding upon governments that, be they autocratic or democratic, do not subordinate their national interests to pledges ostentatiously made in global forums.

This Glasgow summit calls to mind the Kellogg-Briand Pact, which won a Nobel Peace Prize for Secretary of State Frank Kellogg,

On Aug. 27, 1928, 15 High Contracting Parties signed on to renounce war as an instrument of national policy. The signatories that day were the United States, Britain, Germany, Italy, Japan, France, Poland, Belgium, Czechoslovakia, Canada, South Africa, Australia, New Zealand, Ireland and India. Within 15 years, all 15 nations, Ireland alone excepted, were ensnared in the greatest war in history.

Like the pledges at the climate summit, the Kellogg-Briand Pact provided for no means of enforcement or sanctions against nations that failed to live up to their commitment.

Consider. China is the world's largest emitter of carbon emissions, Russia the fourth largest, and Brazil the seventh largest worldwide.

Yet President Xi Jinping of China, President Vladimir Putin of Russia and President Jair Bolsonaro of Brazil did not show up at the summit. And President Joe Biden of the United States and Prime Minister Boris Johnson of Britain both fell asleep during the proceedings.

Glasgow is destined to fail because national interests invariably triumph over globalism. The demands of the people who keep regimes in power will be heard and heeded before the claims of the transnationals.

Biden, faced with a threat by Sen. Joe Manchin to sink his Build Back Better bill, summarily dropped a measure that would have imposed rising carbon taxes on fossil fuel plants and provided monetary rewards for clean energy facilities. Biden dropped it because his own and his party's fortunes depend on enacting the legislation.

The protests in Scotland this weekend were far more colorful than the yearlong "yellow vest" protests in France. Yet, the French protests proved more effective and successful.

That movement originated with French motorists from rural areas who had long commutes and were protesting an increase in fuel taxes that was real and immediate. The French protests had a specific goal, and they succeeded in bringing about a reduction in the fuel taxes.

"King coal is dead!" we heard from the summit.

Really? Coal is a foundational resource in Asia, and demand for coal grows as the populations and economies of Asia expand.

Coal accounts for 60–65% of the electricity generation in China and 68–73% in India, two nations that represent more than a third of the world's population. Nations such as Australia depend upon the sale and shipment of coal as essential components of their exports.

Consider Scotland itself. Should it move to secede from Britain, will it gladly forfeit the North Sea oil and gas deposits that have proven so beneficial to Britain?

As America transitions to clean energy and electric vehicles, our own reliance upon China will grow. For China is today the world's principal supplier of solar panels and the rare earth minerals vital to the batteries of electric cars.

To get to Glasgow, delegates, journalists and activists had to travel by commercial or private jet, and every restaurant, bar, hotel room and conference hall had to be lighted and heated by electricity generated by the kind of gas-, oil- and coal-fired plants that global elites want on the chopping block by midcentury. The carbon footprint of the Glasgow summit was not inconsiderable.

Now that the presidents and prime ministers have departed the global summit in its second and final week, we're going to get down to the lick-log.

Writes the Washington Post: "In coming days ... negotiators from nearly 200 countries will haggle over every word in every line of an agreement that could shape ... how the rich countries of the world deliver on promises to help more vulnerable nations."

Specifically, who will pony up the $100 billion per year promised to poor and developing nations at previous climate summits and never fully delivered? And who will pay the reparations for the "loss and damage" suffered by the poor and developing countries, previously caused by the industrialized nations of the world?

At root, almost every globalist and transnational institution and summit has a common feature: the endless transfer of wealth from the First World, the historic oppressors, to their alleged Third World victims.

These gatherings are to determine how much in reparations the latter can extort from a conscience-stricken West.

Will the GOP reject the shakedown?