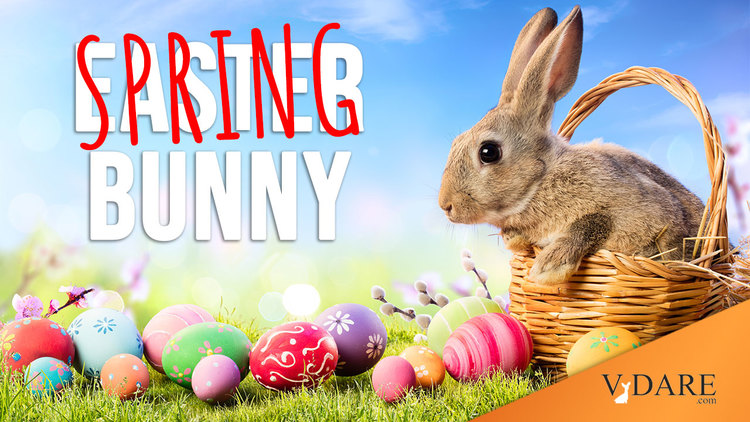 HAPPY EASTER FROM VDARE.com! And To Hell With The "Spring Bunny"!

In 1984, to raise money for famine-stricken Ethiopia, Bob Geldof penned a catchy song called "Do They Know It's Christmas?"

In fact they did—Ethiopians have been Christians since the fourth century, before my own Anglo-Saxon ancestors.

But this Eastertide, looking at the children of America, we have to ask "Do they know it's Easter?"

Apparently the concept of  Easter is so potentially offensive to the Christophobic, that the children of America can't even have Easter Egg hunts, and have to be taken to see, not the Easter Bunny, but the "Spring Bunny."

A fun-filled afternoon today at Claremont with a special visit from the Spring Bunny. Plastic eggs filled with treats were had by all as students & staff soaked up the sunshine & began their countdown to Spring break @FTPSchools pic.twitter.com/REWPrrxzqU

We had an egg-stra special visitor at the hospital. Take a look! The Spring Bunny stopped by and delivered 350 baskets and goodies to our patients. A big THANK YOU to the Christopher Foundation for making this possible. pic.twitter.com/Qfm3iCFgU8

These children are being protected from hearing the word "Easter."

The same ideas that drive the War On Christmas affect Thanksgiving and Easter.

The Spring Bunny first showed up on VDARE.com 17 years ago. In 2005, Peter Brimelow wrote, "Fans of our ever-popular annual competition to determine the most egregious attempt to abolish Christmas will not be surprised that Easter is being abolished too, even in its most inoffensive furry form."

Yes, it was (and is) War On The Easter Bunny.

And where does this impulse come from? Well, attacking the Easter Bunny isn't about a little chocolate rabbit. It's about post-America.

...New York’s Radio City Music Hall announced that its annual “Easter Show” would now be dubbed the “Spring Spectacular.” In 1995 the “Easter Show” was renamed the “Easter Extravaganza” (an acceptable change), but this year the closest association with Easter was found in the small print below “Spring Spectacular,” which read: “The Glory of Easter.”

We got curious and called Radio City and the ad agency that handles its business. What we were told was that the change in name was done in the interest of broadening the appeal of the program.

The reason we called was because someone in Catholic circles had given us a tip. It seems that when he called the person in the ad agency that handles the account for Radio City, he was told that the reason for the change of names was, “We’re trying to take the Christianity out of Easter.” That’s a more honest way of handling the issue instead of falling back on the need for “inclusive language.” We only regret we weren’t given the same explanation. [More]

That's the explanation: not secularizing, but de-Christianizing. And the motive for that is something called "Christophobia," which I wrote about in a 2012 column called  “Christophobia”—The Prejudice That Barely Has A Name.

The reason we talk about the War On Christmas, The War On Thanksgiving, and the War On Easter, is that they're all part of the War On The Historic American Nation.

If the Easter Bunny is offensive, America is offensive. And maybe it's time WE got offended back.

(“By a happy coincidence, Easter Sunday falls this year on the thirty-fifth anniversary of Enoch Powell's great speech on immigration—given in Birmingham on April 20, 1968. This neatly intertwines the themes of spiritual and national death and resurrection in a way that might have pleased Powell, who had been a fierce atheist as a young man and whose equally fierce if unorthodox Anglicanism in later life was explicitly related to his appreciation of the English Church as an expression of the English nation.")

ChristophobiaWar on Easter
<< Previous
Next >>
LATEST