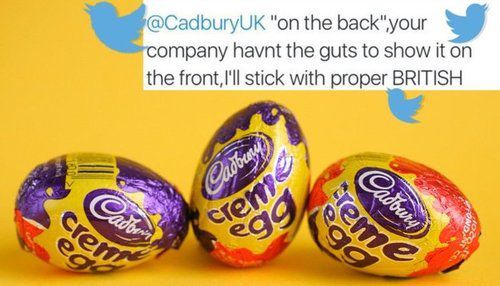 Happy Easter From VDARE.com—Down With The "Spring Bunny!"

In 2015, I pointed out that there is a War On Easter, just as there is a War On Christmas and even a War On Thanksgiving. What they have in common is hatred of the traditional American nation (“It’s not your father’s America!”) and generalized Christophobia. The War On Easter is not as big as the War On Christmas, but the idea is the same—that even the mention of a traditional Christian Festival is offensive, so you have to pretend that the schools are closed on Good Friday for no particular reason.

Needless to say, you also get a lot of War On Easter Denial—here’s a story from a couple of years ago: Fox News conjures, attacks “War on Easter”, By Joel Connelly, Seattle Post-Intelligencer, March 29, 2013.

The main manifestation of the War On Easter—which mostly operates on a lower level than the War On Christmas—is calling the Easter Bunny (a cultural rather than religious symbol) the “Spring Bunny” and Easter Egg Hunts—organized by cities and Parks and Rec Departments—“Spring Egg Hunts.”

In Google News a search for "spring bunny" OR "spring egg" finds a number of these functions, reported as if normal. For example, on Capitol Hill in Seattle, they’re having an official “Spring Egg Hunt”, pictured at the top of the page: Capitol Hill 2016 egg hunts — Here comes the Spring Bunny ,CapitolHillSeattle.com, March 12, 2016.

In the small town of Fallbrook, California, population 30, 000, there’s this note in the local community news:

FALLBROOK – Fallbrook Community Center will hold its annual Egg Hunt Pancake Breakfast on Saturday, March 26 from 7:30 to 10 a.m. All activities, including the egg hunt, will be held at the community center this year.

The Fallbrook Firefighters Association will prepare and serve breakfast for all. The cost is $4 for children 11 and under, $5 for 12 and over. A photo opportunity with the spring bunny will be available at the breakfast for $2. The Spring Egg Hunt will start at 10:30 a.m. for ages 2 to12 followed by games with prizes and activities. [Emphasis added]

At the bottom, in automatically related links, are these Villagenews.com two stories:

Bring the family to the Fallbrook Community Center this Saturday morning, March 26, for a great pancake breakfast prepared by Fallbrook firefighters, stay for a visit with the Easter Bunny and let kids participate in an Easter egg hunt. Breakfast starts at 7:30 a.m. and costs $3.50 for adults, $2…

FALLBROOK — This Saturday, March 26, families can enjoy Easter activities at the Fallbrook Community Center. Festivities will begin with a Pancake Breakfast by the Fallbrook Firefighters Association at 7:30 a.m. After breakfast, children can visit with the Easter Bunny and an Easter egg hunt will take place beginning at… 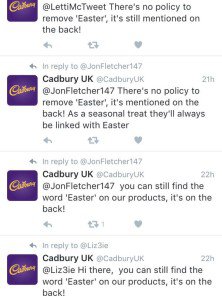 Same community center—but those stories date from 2005. A search finds that just last year, they were celebrating Easter in Fallbrook, CA: Annual Pancake Breakfast, Egg Hunt a joyful time, on April 9, 2015. What changed?

In Britain, Cadbury, the famous chocolate makers, are getting some pushback over a decision to deemphasize the Easter factor on their Easter eggs—this year they say "Creme Eggs" on the front: Dropping ‘Easter’ from eggs stirs culture war in U.K., Trevor Grundy, USA Today, March 25, 2016.

In Twitter, someone said we should "Spare a thought for the poor [fellow] running the @CadburyUK Twitter account today." There he is at right, saying "You can still find the word Easter on the products, it's on the back!"

Here is a fairly typical response: 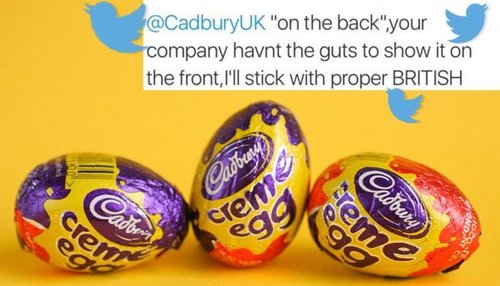 At VDARE.com, we say down with the Spring Bunny, and once again wish all our readers a Happy Easter!