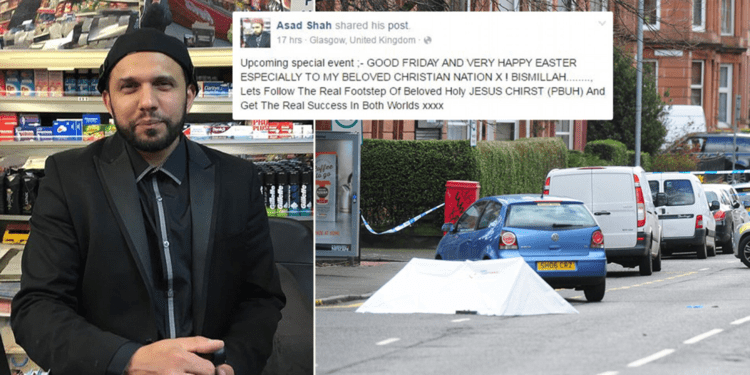 Here's a story of a real, rather than metaphorical, War on Easter—although it's a Muslim on Muslim killing, it's based on hatred of Christianity.

This story from Scotland suggests why there are few or no moderate Muslims heard from—the immoderate ones kill them.

Murder of a man of peace: Muslim shopkeeper who wished his 'beloved Christian nation' a Happy Easter is stabbed 30 times by a FELLOW MUSLIM who sat laughing on his dying victim's chest By Sara Smyth for the Daily Mail

A newsagent was murdered by a fellow Muslim after he wished his Christian friends a peaceful Easter.

Asad Shah, who was stabbed up to 30 times at his shop, had praised both the life of Jesus and ‘his beloved Christian nation’. Left lying in a pool of blood, the 40-year-old died in hospital.

Police, who were questioning a 32-year-old suspect last night, said the killing was religiously motivated.

Mohammad Faisal, a family friend, said a bearded Muslim wearing a long religious robe entered Mr Shah’s shop and spoke to him in his native language before stabbing him in the head with a kitchen knife. [More]

Another British newspaper is not so forthcoming:

This report on a "religiously motivated murder" of a Muslim shopkeeper omits the religion of the suspect. https://t.co/jkB2K86Kd3