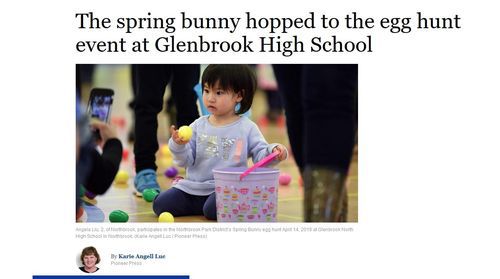 WHEN I SURVEY THE WONDROUS CROSS: Happy Easter (In Spite Of The Christophobia-Inspired "Spring Bunny")

Last year I wrote that I could refute the article Why Is There Is No War on Easter? [by John Ellis, PJ Media, March 29, 2018] with two words: "Spring Bunny." The "Spring Bunny" was unknown in my childhood, which took place in the 1960s. You have to have been born in the 21st century to have attended a "Spring Bunny" event as a child. See my Easter 2010: Who Is This “Spring Bunny”?

Of course, it's just a Christophobic attempt to step on Easter and as such is actually gloated about as this year in the Washington Post:

Emily Johnson, who stood in line at the Fair Oaks Mall in Fairfax, Virginia one day last week with her sisters, waiting to pose for a photo with a large bunny in a patterned suit. For the trio of siblings — in their 30s and 40s — the photo and Thai lunch out afterward is their Easter tradition, and their commitment to it is orthodox and nonnegotiable.

“We went to church [on Easter] growing up and taking pictures with the Easter Bunny, and that eventually turned into family dinners and then ... ” the 43-year-old lab technician said, her voice trailing off as she made circular motions with her hand, like a wave rolling on. Her younger sisters nodded.

One parent passed away. A sister moved to Maryland. Even holiday weekends got crowded with kid baseball practices and grocery shopping. Two of the sisters call themselves Christian but Johnson says she’s not religious whatsoever. Yet the bunny-photo tradition lingers, she says, maybe because the ritual feels lighthearted after the oppression of winter, and it produces an annual image of her together with her sisters.

“Maybe it seems ridiculous for a bunch of women to snuggle up to a bunny in a costume, but it’s the only time of the year we get a nice photo together,” she says. “It’s just a part of our lives. It’s what we do.”

And, needless to say, it's not the growth of "nonreligous Americans," but non-traditional immigration, that ultimately lies behind this attack on Easter. Observance ebbs and flows, but most "nonreligious Americans" (as Ms. Boorstein implicitly concedes) still respond viscerally to America's Christian heritage. Our John Derbyshire said on Radio Derb this week:

I may be temperamentally irreligious, but I had a thorough Church of England education. In my childhood you couldn't avoid it. I know the hymns, I know the liturgy, and I know the Bible pretty well.

If I told you it all had no emotional content for me, I'd be telling an untruth. You can't grow up steeped in stuff like that without it leaving some emotional residue, positive or negative.

In my case, positive. I have special affection for the old Anglican hymns, many of which are very lovely. Here's one of my favorites for the Easter season: "When I survey the wondrous cross," sung here by the choir of King's College, Cambridge.