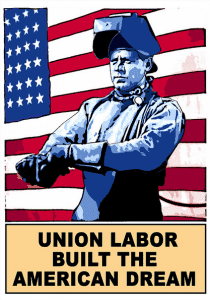 In a globalized economy, American workers are trapped in a “race to the bottom” as businesses outsource whatever they can. Even some professionals and economists like the late Milton Friedman understood such a process is self-defeating: driving the majority of American workers into poverty doesn’t help the long term stability of the country.

Yet our short-sighted financial and political elite seem utterly determined to hollow out what is left of the American economy. It’s no coincidence that the same people driving amnesty are the same people pushing for the Trans-Pacific Partnership Commission that will hand control of our trade policy and immigration to an unelected foreign bureaucracy.

Immigration patriots have been attacking this sociopathic elite for years now. And the corrupt plutocrats have been ably assisted by the ethnic lobbies and the Obama Administration’s Executive orders. But for now, they’ve suffered defeat at the hands of a force many had given up on —organized labor.

Depleted by decades of diminishing reach and struggling to respond to recent anti-union laws, the labor movement has nonetheless found a way to assert itself politically by wreaking havoc on President Obama’s trade agenda, a top priority of his final years in office.

On Friday, stiff labor opposition helped derail a measure necessary to clear a path for an up-or-down vote on a sweeping trade deal that the White House is negotiating with 11 other nations bordering the Pacific Ocean…

Labor leaders and their rank and file feared that, whatever the overall benefits to the economy, the emerging deal would accelerate the loss of blue-collar jobs that pay well. “The pay levels people would have to compete with are obscene,” said Larry Cohen, a former Communications Workers of America president, who led the coalition. There is evidence that freer trade has reduced the incomes of those without college degrees.

Since March, according to the A.F.L.-C.I.O., union members have held 650 events opposing the legislation. They have made about 160,000 phone calls to members of Congress and written more than 20,000 letters. The federation also produced digital ads, which have received more than 30 million views, aimed at several dozen members of Congress.”

[Labor’s Might Seen in Failure of Trade Deal As Unions Allied to Thwart It, by Noam Scheiber, New York Times, June 13, 2015. Emphases added. Link in original].

Of course, mass immigration has also been the key factor in driving down pay to “obscene” levels. The real surprise here is that the unions finally acted, considering how passive they have been over the last few decades.

But this should not be taken as evidence of a labor recovery. Republicans, especially Scott Walker, are moving to destroy them once and for all. Walker has become nationally known for his campaign for “right to work” laws, which prevent unions from requiring dues from employees as a condition of employment. If Walker is elected President, we can expect such a campaign to go nationwide [Scott Walker and the Fate of the Union, by Dan Kaufman, New York Times Magazine, June 12, 2015].

Large conservative donors like the Koch Brothers would welcome such a development. My take: for those of us who operate from paycheck to paycheck, this would only accelerate the “race to the bottom” we are all facing.

During the 1950s, perhaps the unions enjoyed too much power. However, the utter collapse of organized labor is now destroying the American working class.

And as we just saw with the TPP deal, organized labor can occasionally fight also for American sovereignty and immigration patriotism—even overcoming the opposition of the Republican leadership and a Democratic President.

There’s a larger concern. As inequality increases, more and more Americans feel they have no stake in the system. It’s unclear how much longer they feel they should abide by its rules.

As immigration patriots are already the enemies of Big Money, perhaps it is time for our organizations to seek alliances with organized labor. After all, our natural constituency are those American workers who are being utterly dispossessed by open borders and free trade. Only our combined power can pressure the politicians, produce the candidates, and raise the money needed to change things.

As a Democrat, I want to see my party once again stand for American workers who will deliver for someone besides the financial elite, the ethnic lobbies, and the hypocritical religious organizations who profiteer from open borders. I’d like to see someone represent the American majority again.

And I am delighted that Labor is showing some sign that it might return to the tradition of Samuel Gompers.

America is facing serious problems, from collapsing wages to crumbling infrastructure. A united labor effort could demand government fix our broken immigration laws as well as our broken bridges, highways, airports and railroads. Such an initiative could provide more than just jobs. It could provide a renewed sense of purpose and power our country has been lacking for so long.

More importantly, it could restore faith in the American social contract that our elite has disregarded for far too long.