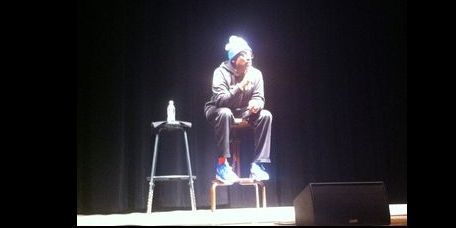 Here’s the thing: I grew up here in Fort Greene. I grew up here in New York. It’s changed. And why does it take an influx of white New Yorkers in the south Bronx, in Harlem, in Bed Stuy, in Crown Heights for the facilities to get better? The garbage wasn’t picked up every [bleepin’] day when I was living in 165 Washington Park. P.S. 20 was not good. P.S. 11. Rothschild 294. The police weren’t around. When you see white mothers pushing their babies in strollers, three o’clock in the morning on 125th Street [NS: highly unlikely], that must tell you something….

Then comes the [bleepin’] Christopher Columbus Syndrome. You can’t discover this! We been here. You just can’t come and bogart [steal]. There were brothers playing [bleepin’] African drums in Mount Morris Park for 40 years and now they can’t do it anymore because the new inhabitants said the drums are loud. My father’s a great jazz musician. He bought a house in nineteen-[bleepin’]-sixty-eight, and the [bleepin’] people moved in last year and called the cops on my father….

Nah. You can’t do that…. You have to come with respect. There’s a code. There’s people. …

And we had the crystal ball, mother [bleepin]’ Do the Right Thing with John Savage’s character, when he rolled his bike over Buggin’ Out’s sneaker. I wrote that script in 1988. He was the first one. How you walking around Brooklyn with a Larry Bird jersey on? You can’t do that. Not in Bed Stuy.

It’s important to note that the New York Magazine editor who called Lee’s rant “amazing” was not being ironic. Liberal whites must always re-define racist black behavior as something positive, anodyne, or just misrepresented and misunderstood, probably by white racists.

Of course, Lee’s position would only make sense if he still lived in the Fort Greene neighborhood he’d grown up in. In fact, he fled it back in 2000, to live far away from blacks in a $32 million mansion on Manhattan’s Upper East Side. [“Spike Lee’s Upper East Side mansion hits market at $32 million,” by Matt Chaban, New York Daily News, February 2, 2014]

But while Lee insists upon his own right to enter elite white neighborhoods, he simultaneously claims that whites should be banned from so much as wearing a Larry Bird jersey in a “black” neighborhood. Lee’s definition of “respect” isn’t English, but the black street thug version: submission to threats of physical force.

What’s worse is that Lee’s hypocritical tribalism is in line with what our rulers have been imposing on us for 60 years. Government at all levels moves with ruthless fanaticism to destroy any neighborhoods that are “too white.” Even Republicans get in the act—like Wyoming Gov. Matt Mead strategizing to culturally enrich his largely white state with Somali “refugees.”

Those pushing these policies live far away from the consequences they create. Like Lee, they say “Diversity for thee, but not for me.”

None of the nine white Supreme Court justices of the unanimous Brown decision lived among integration/diversity. Nor did the committee that helped federal judge Arthur Garrity “integrate” Boston’s public schools via forced busing during the 1970s. [“Busing’s Boston Massacre,” Hoover Institution, November 1, 1998]

The justification for sweeping government action on desegregation, busing, anti-white racial preferences, and demographic change is what the U.S. Supreme Court called in Bakke the “compelling state interest” of diversity. But the very people who push it seem the most eager to forgo its blessings.

What holds the whole scheme together is simply white guilt. While it is fashionable to sneer at white-driven gentrification, other propagandists condemn “white flight” for supposedly causing high black crime rates and economic collapse.

For example, former crime reporter David Simon created the TV show The Wire, a supposedly realistic look at crime and policing in Baltimore. During a documentary promoting the show, Simon asserted that social scientists had proved that when a formerly white neighborhood reached six percent black, the whites all pulled up stakes and left, as if whites said, ‘We won’t tolerate this level of black neighbors.’ Simon gravely nodded, after stating his pseudo-fact, as if to say, ‘You see how racist whites are?’

The simple truth: whites are fleeing the black violence, not causing it.

A revealing look at how “diversity” destroys communities is the 1998 book Left Behind in Rosedale, by sociologist Scott Cummings. This mainstream, academic work covers the destruction of Fort Worth TX’s formerly white, crime-free, University Heights neighborhood.

It’s a familiar tale. Middle-class blacks moved in, used the now desegregated neighborhood as a stepping stone, and moved on. They were followed by the underclass, who imposed a reign of racial terror on the aging whites who didn’t flee. Atrocities included the rape and murder of elderly women, in one case through shoving a broom handle down a woman’s throat.

The Fort Worth PD failed to protect the whites, the MSM ignored their plight and—as Cummings recounts—his academic colleagues positively reveled in the whites’ suffering.

But the reaction of liberal whites is far different if it is whites themselves who are changing neighborhoods. Usually middle/upper-middle class whitea buy up properties cheaply in depressed areas, and improve and profit off them. These “gentrifiers” often start out in working-class white neighborhoods, such as Brooklyn’s Park Slope, but soon run out of white areas, and have no choice but to wade into black communities, like Manhattan’s Harlem, Brooklyn’s Fort Greene, various parts of Baltimore, and other dilapidated, black-run cities.

Many urban dwelling gentrifying whites are socially liberal—which leads to awkward encounters once they actually encounter “diversity.” Recently, a lesbian Baltimore gentrifier, Tracey Halvorsen, came out of the closet about the black-on-white racial violence, in a searing personal essay. [“Baltimore City, You’re Breaking My Heart,” Tracey Halvorsen, Medium, February 6, 2014] Halvorsen inspired other Baltimore gentrifiers to recount their own harrowing experiences with blacks. But she also received the predictably hysterical blowback about how black crime is actually her fault, because of “inequality.” [“Some or All Fears: ‘Breaking My Heart’ Post Sparks Debate,” City Paper, February 7, 2014]. Suitably chastened, Halvorsen swiftly bent the knee, condemned those who had shown her support, and leapt back into the closet, pulling the door tightly behind her.

It’s a long drop from “for ourselves and our posterity” to public policy driven by the insecurities of people like Spike Lee.

Integration and diversity was never about improving the lives of blacks. It is about destroying the communities of whites—and creating a dysfunctional, dependent wreck in the place of the historic American nation.