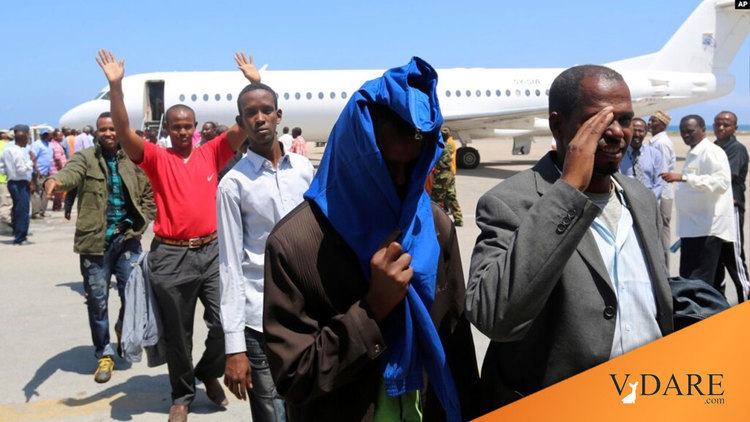 Sam Brownback and the Somali Bantu

Coming soon to a town near you: some of a projected influx of 12,000 Somali Bantu. Unless you live in Kansas—thanks to the hidden hypocrisy of its arch-immigration enthusiast Senator, Sam Brownback.

You have to admire the sense of humor of the folk in the refugee industry. Their current bright idea: to resettle part of a polygamous tribe that practices female genital mutilation in Holyoke, Massachusetts—next door to the first women's college in America.

Even by the standards of the refugee industry – and God knows etc.—the story of the Somali Bantu is wild. They are not ethnic Somalis, the group who have just notoriously discovered Lewiston, Maine, doubling its welfare budget in two years. (At 3 percent of the Lewiston's population, Somalis now receive 46 percent of its welfare payments). Instead, the Somali Bantu are the descendants of slaves brought to Somalia from further south as much as two hundred years ago. They remain distinct and are allegedly despised by their former masters—themselves, it should be noted, black Africans.

Under a 1997 agreement with the United Nations, which operates Somali Bantu refugee camps in Kenya, the Somali Bantu were to resettle in Mozambique, their ancestral homeland. But Mozambique backed out at the eleventh hour, citing a change in government and a lack of resources.

So the Somali Bantu are coming here.

Of course, for a fraction of the money the U.S. will spend to move this tribe to America, Mozambique could have been persuaded to carry through on its promises. But the U.S. refugee industry needs clients! So that option was never considered.

The cost to the taxpayer of resettling this tribe in the U.S. could run into the billions.

For example, the usual HIV bar to U.S. entry does not apply in the case of refugees. Of the Somali Bantu who have been processed for resettlement so far, slightly less than 1% have the HIV virus. That's low compared to most HIV prevalence rates in Africa—but it's about 3 times the rate in the U.S.

Additionally, the American Public Health Association says "other factors indicate that the country and particularly immigrants from Somalia are at significant risk" from HIV. APHA cites screening failures and new undetectable strains of the disease now emerging in the area.

"A variety of parasitic diseases are common in Somalia, including schistosomiasis, roundworms, tapeworms…. Parasitic diseases are sometimes difficult to readily diagnosis because many HCPs [Health Care Providers] in the U.S. are unfamiliar with the symptoms and appropriate screening tests. This is understandable since these diseases are not endemic to the U.S."

Many more of the approximately 900,000 Bantu who are still in Somalia could well end up here too. The resettlement from the Kenyan U.N. camps does not explicitly guarantee those left in Somalia a place in America. But it will detonate the usual explosion of family chain migration, asylum seekers and illegal immigration.

The federal Office of Refugee Resettlement wants to keep together the Somali Bantu because of the special needs they face integrating into a modern society. These needs were recently graphically summed up by International Organization for Migration bureaucrat Shasha Chanoff: "Do not assume they can open a door just because it has a doorknob." By settling large numbers in the same general location, the federal government can concentrate and efficiently distribute the services needed to support the tribe.

Immense pressure has been put on Holyoke. It has been assured its quota will be only 300 refugees. (Of course, refugees settled elsewhere can move to Holyoke, as Lewiston has discovered.) A million in federal grant money is being dangled plus the promise of an ongoing stream of federal welfare dollars, pumping $1-2 million annually into the local economy.

In spite of the prospect of becoming a Klondike of handouts, the benighted Holyoke council still passed a symbolic resolution rejecting the resettlement—even with the proffered package. Of course, this was merely symbolic. The resettlement is federally mandated. But it's significant, because enough local opposition probably could deter Washington.

Unsurprisingly, the protests of Holyoke and Lewiston brought the entire national media apparat down on their heads.

But the national media was strangely silent when another community resisted Somali refugees—successfully. Thus late last year, the New York Times coyly reported "refugee experts say that one United States community, which they did not name, has expressed misgivings about taking in the Somali Bantu". [Somali Bantu, Trapped in Kenya, Seek a Home, December 9, 2001,By Marc Lacey ]

Whoa! That's the same group that is now being imposed on Holyoke. And the resistance was led, not by bigoted local peasants, but by a pillar in the politico-immigration complex.

It was none other than Senator Sam Brownback (R.-Kansas). He said the state of Kansas would not take even a single Somali Bantu.

When it comes to mass immigration, Sam Brownback is not just another Senator. He played a key role in sabotaging Republican support for the 1996 Smith-Simpson bill, the last serious effort at immigration reduction. And when the State Department accepted the Somali Bantu, and discussions began about where they would go, he was chairman of the Senate immigration subcommittee.

State Department officials say Brownback had told both them and U.N. refugee chief Ruud Lubbers that he was "interested in resettling more refugees in Kansas." State began exploring the feasibility of resettling the Bantu in Wichita, Kansas.

According to Chris Renner, Program Director of the Kansas Board of Education, the Senator was the catalyst of the resettlement plan and "to make a long story short, he … lent his support to the resettlement of this population in Kansas."

But apparently Kansas did not like the resettlement proposal any more than Maine and Massachusetts do. And after 9/11, Brownback announced a change of heart. He said on Oct 12, 2001

"I oppose any resettlement of Somali Bantu refugees in the State of Kansas…. Our office has contacted the Department of State asking them to not resettle any Somali Bantus in Kansas….Simply put this should not occur".

When asked about his support for Sudanese refugees previously resettled in Kansas, he said "they know English. They're very pro-American." The Bantu, on the other hand, "would not work well in Kansas" according to the Senator.

(Now remember, this is the Senator who has no problem appearing on the same dais, spouting the same message, as La Raza.)

"I never requested 10,000 Bantu to be placed in Kansas," Brownback said. "That's a huge population for a state of our size."

Thus ended the initial attempt to resettle the refugees. Now they will be scattered in towns across America.

Sam Brownback's change of heart was chronicled in a local paper but never picked up by the national media. In fact, according to Rob Roberts, a reporter who worked on the story for The Johnson County Sun, the Senator did everything to make sure both his original welcome of the tribe and his subsequent retraction of the invitation were forgotten. ["Brownback clarifies position on refugee issue: No Bantu" By Rob Roberts, Johnson County Sun, October 17, 2001]

Hence the New York Times could report on a community that "refugee experts" declined to name, leaving behind what should have been a great story of hypocrisy in high places and—always a favorite media theme—a "town without pity."

Especially in light of the media's treatment of Holyoke and Lewiston, it is interesting that the newspaper of record could let another community's successful protest go unexamined.

But Brownback was allowed to slip back into refugee cheerleading. Without so much as a hint of shame, he was soon chiding Florida for not taking more Haitian rafters. And, along with soon-to-be Senate Majority Leader Bill Frist, he signed a September 27, 2002 letter to the President urging the U.S. to accept at least 100,000 refugees annually.

This letter claimed that "members of religious minorities from the former Soviet Union" and "refugees from Vietnam and Cuba also continue to warrant our attention."

As long as they don't settle in Kansas?

Sam Brownback remains the "go-to" guy whenever the media needs a pro-immigration sound bite from the right. In a recent New York Times article advocating resettlement of more refugees to the U.S., he said "I don't think we're providing the example to the world we should…. We need to be willing to step forward as an example". (Since Attacks, U.S. Admits Fewer Refugees, Oct 30, 2002, By Christopher Marquis).

He ought to know.

Most importantly for the refugee industry, Brownback is sponsoring the Refugee Protection Act along with Senator Patrick Leahy - a bill which will unleash a tide of bogus asylum seekers in the U.S.

Parts of the Refugee Protection Act had even been slipped into the Homeland Security Bill—more evidence of the refugee industry's sense of humor. But they were removed in the final weeks before passage.

This bill should really be called the People Smugglers Dream Act. The New York Times is leading the charge in support of its passage. (See its editorial, Dec 28, 2002 "The Welcome Mat Frays")

Perhaps this is why Senator Brownback gets a free pass - and the mayor of Lewiston is portrayed as an ignorant provincial.

The plain fact is that the refugee industry and its shills are allowed to operate with total immunity from honest press coverage.

Except, of course, for VDARE.COM!

Thomas Allen (email him) is a recovering refugee worker.