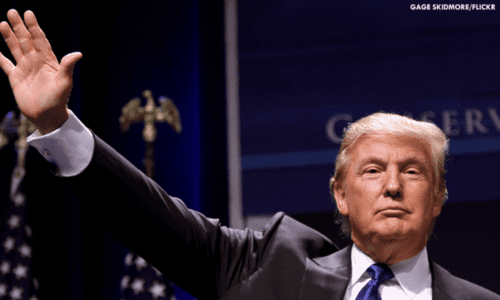 Trump Has A Point—Why NOT Ban Muslim Immigration?

How about that Donald Trump, eh? Monday this week the Donald called for "a total and complete shutdown of Muslims entering the United States." He walked the thing back a little bit the next day, saying that U.S. citizens who are Muslim should of course be allowed back in from overseas trips: "They're a citizen. That's different.” Naturally I am in total agreement. It does need breaking down a little, though.

There are three ways a foreigner comes to the U.S.A. He comes on an immigrant visa, or on a nonimmigrant visa, or he comes illegally. Let's ignore the last category there as being just a law-enforcement issue. What about the others?

You're asking me? I write for VDARE.com. We want a moratorium on all new permanent settlement! The U.S.A. has as many people as it needs, and some serious problems of assimilation. Let's stop all issuance of immigrant visas for the indefinite future, and get down to assimilating the huge numbers we've let in this past fifty years.

What, exactly, is the case against this? There isn't one. You can't make one; although you can, of course, chant platitudes about huddled masses and "a nation of immigrants." That's not making a case, that's just emoting.

When I first came here forty years ago the U.S.A. had 210 million people, who had somehow just managed to put men on the Moon. I traveled all over that 210 million America — actually drove coast to coast and back in my 1964 Chevy. Let me tell ya, in case you weren't around, 210 million America was a darn nice place.

Now we have 320 million, a 52 percent increase. Is the U.S.A. 52 percent better off for that, discounting for things that would have improved anyway?

The ban on settlement needn't be waterproof. I'm sure most Americans would allow some minimal family unification — spouse and minor children of citizens, subject to basic security checks. Likewise for foreigners with extraordinary talents. If the world's greatest chess player wants to settle in America, I'd say let him. Personally I'd even allow Muslims in both cases, subject to security screening.

That would get you down to a few thousand a year accepted for permanent settlement, of whom a few dozen might be Muslims. But the current numbers—well over a million a year, ten percent of them Muslims—are insane. We don't need these people; and with such huge numbers, we can't do proper, thorough background checks.

The first thing to be said here is that these nonimmigrant visa categories are all hopelessly corrupted, as spelled out at length by Michelle Malkin and John Miano in their book Sold Out. The whole system of nonimmigrant visas needs to be scrapped and rebuilt from scratch, with proper entry-exit tracking to stop visa overstayers.

All right, but that's not going to happen soon. Until it does, should we exclude Muslims, even as tourists?

Yes, we should, to the degree we can. It is true of course that most Muslims aren't extremists planning terrorism. Only a tiny minority are. The world has a lot of Muslims, though. What's a tiny minority—0.1 percent? There are 1.6 billion Muslims. Zero point one percent of 1.6 billion is 1.6 million. Keep 'em out!

All, right, but how?

First we need to scrap the Visa Waiver Program. Oh, you didn't know about that? Citizens of 38 countries can come to the U.S.A. without a visa. These are all First World countries, mostly European; but that's no protection. Britain, France, and Germany are on the list and now they all have big Muslim populations.

The Visa Waiver Program should be scrapped. Any foreigner who wants to enter the U.S.A. for any purpose should have to apply to his local U.S. embassy for a visa and submit to a personal interview and a background check. Visa officers should have total discretion; and they should be instructed not to issue visas to applicants they suspect of being Muslim.

They'd make a few bad calls in both directions, no doubt; but that's no reason not to do what we can.

Passport control officers at points of entry are a second line of defense. They already have authority to refuse entry to people on watch lists or who otherwise arouse suspicion. Keeping bad people out is not insuperably difficult.

This is our country. We can admit or exclude anyone we please, without explanation or apology. Right now, with Muslim extremists causing mayhem in Western countries, we obviously have a strong interest in keeping Muslims out.

Again, the ban needn't be totally waterproof. I'd allow diplomats from Muslim countries, for example; and if the King of Jordan wants to pay a visit, I'd issue him a diplomatic visa.

Beyond that, I don't see any need. Most of what business travelers do could be Skyped. I can't imagine Muslim tourism is a big sector even of any of our local economies. We admit far too many foreign students: our schools are a finite resource that should be preferentially for our own people. The guest worker visas are just a cheap-labor scam—read Michelle and John's book.

The Trump ban wouldn't completely solve our Muslim problem. We have stupidly been allowing settlement of tens of thousands of Muslims every year for decades now; and there's a population of native converts, like the boxer Muhammad Ali and the senior Beltway sniper.

But the Trump ban would stop our Muslim policy from getting worse. That, it seems to me, is good sound policy.

It is a measure of how demented, how detached from reality our public life here in the Western world has become, that the Trump ban, which I have just declared to be good sound policy on, I think, calm and reasonable grounds, generated shrieking hysteria among political and media elites here and abroad.

Politicians from both wings of the Democrat-Republican Open-Borders cartel went into harrumph mode. Jeb Bush took a break from trying to lift his poll numbers up into double digits to tweet: "Donald Trump is unhinged. His 'policy' proposals are not serious," with mockery quotes around the word "policy." Hillary Clinton, also on Twitter: "This is reprehensible, prejudiced, and divisive … This makes us less safe." I guess continuing to admit 100,000 Muslims a year for settlement makes us more safe.

Marco Rubio honked that “I disagree with Donald Trump's latest proposal. His habit of making offensive and outlandish statements will not bring Americans together." End honk. Lindsey Graham lisped that: "Donald Trump has gone from making absurd comments to being downright dangerous with his bombastic rhetoric," end lisp.

Rick Kriseman [Email him] the mayor of St Petersburg, Florida tweeted that

I am hereby barring Donald Trump from entering St. Petersburg until we fully understand the dangerous threat posed by all Trumps.

Perhaps Mayor Kriseman should attend to the beam in his own eye. According to the NeighborhoodScout website:

St Petersburg has one of the highest crime rates in America compared to all communities of all sizes … One's chance of becoming a victim of either violent or property crime here is one in 16. Within Florida, more than 93 percent of the communities have a lower crime rate than St Petersburg. In fact … NeighborhoodScout found St Petersburg to be one of the top 100 most dangerous cities in the U.S.A.

Where one's personal safety is concerned, being banned from St. Petersburg looks like a good deal.

So it went. I didn't read a whole lot of these responses, but I have not the slightest doubt that someone somewhere said: "That's not who we are." It wouldn't be a full-blown outbreak of PC hysteria without that.

The politicians at least tried for a dignified style of disdain. The media Lefties were just, if Jeb won't mind my borrowing an adjective from him, unhinged.

The Philadelphia Daily News ran a cover showing Trump with his arm raised and the headline THE NEW FUROR, F-U-R-O-R.

Having mixed with tabloid journalists considerably this past thirty years, I assumed the subeditor responsible was too stupid to spell Führer correctly, but apparently they were trying for a pun. That's brilliant, guys.

Comparing Trump with Hitler because of the suggested ban on Muslims is actually a bit odd. Hitler seems to have gotten on well with Muslims. Mohammed Amin al-Husseini, the Grand Mufti of Jerusalem when the Nazis took power, was a big favorite. Al-Husseini had an amicable meeting with Hitler himself in 1941; and one of his most treasured possessions was a photograph of him and Heinrich Himmler smiling sweetly at each other, with a friendly inscription by Himmler, taken in 1943. The common bond there was of course hatred of Jews.

It was the same all over the media playpen. I caught The O'Reilly Factor on Fox News Monday night. Bill had his two bimbo lawyers there to discuss Trump's remarks. The first one started in by saying that not granting visas to Muslims would violate the Constitution. That got a smile from the Big Mick. Bill doesn't know squat about immigration but he does know that foreigners in foreign countries don't enjoy the protections of the United States Constitution.

The Pew Research Center surveyed Muslims in 39 countries, asking them if they thought sharia law should be supreme in their countries. In Afghanistan, ninety-nine percent said it should. Pakistan, 84 percent.

Trump's proposed ban is moderate, sensible, and prudent. The fact that it ignited hysteria among our elites just tells us how unmoored from reality our elites have become.

We need some new elites. Electing Donald Trump as President would be a good start.