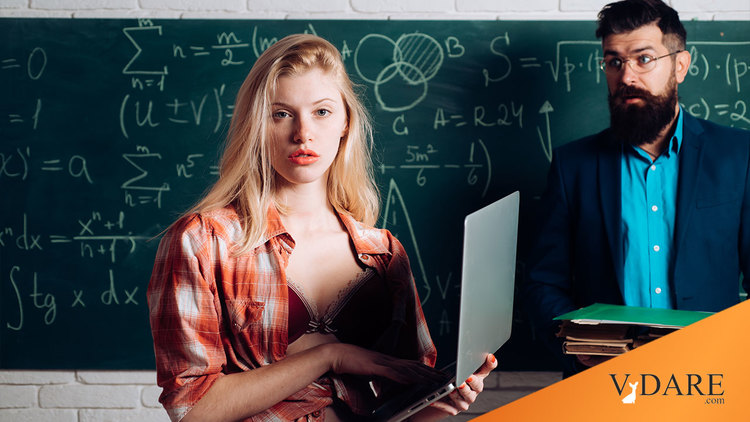 NYT: What Are Girls And Boys, Women And Men, For?

The Sexual Revolution of the Sixties is falling increasingly out of fashion as we enter a sort of neo-Victorian era as younger people are increasingly likely to tweet about gender rather than engage in sex.

But because basically the same people are in charge of the culture today as in the late 1960s, nobody is allowed to blame the Sixties for the fashions of the last 55 years. Instead, feminists blame Patriarchy from time immemorial. For example, from the New York Times opinion page:

What’s Wrong With Sex Between Professors and Students? It’s Not What You Think.
Sept. 3, 2021

Amia Srinivasan is a professor of philosophy at the University of Oxford. This essay is adapted from her forthcoming book, “The Right to Sex.”

… It is true that today’s college-age generation has, in many ways, a more expansive relationship to gender and sex. But those dissident possibilities are taking shape against a background of still-rigid gender expectations — an implicit understanding, often internalized, of what girls and boys, women and men, are for.

Q. What are girls and boys, women and men, for?

A. Making more girls and boys?

Being the wacko SPLC-denounced extremist that I am, I dare to favor the further propagation of the human race, even if the survival of humanity might somewhat impede women from fully closing the career achievement gap with men.

My view of campus romance: a two-level difference is too many, one is okay.