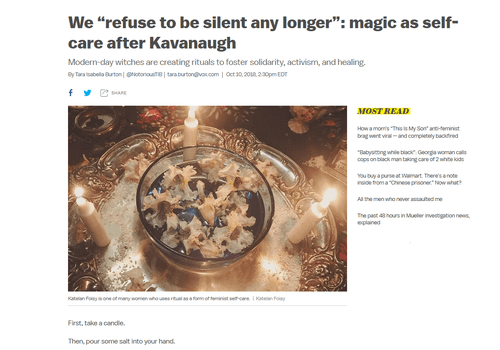 VOX: "Magic as Self-Care After Kavanaugh"

We “refuse to be silent any longer”: magic as self-care after Kavanaugh

Then, pour some salt into your hand.

Then, keeping the grains in your palm, take a pen to write out a thank you to Christine Blasey Ford, the woman whose allegations of sexual assault against Supreme Court nominee — and now justice — Brett Kavanaugh, stunned a nation.

Or, if you prefer, simply say, “I believe you.”

It’s just one of the many quasi-religious rituals circulating the internet — particularly pagan and #resistance circles — in the wake of Kavanaugh’s confirmation. These rituals help self-identified witches process trauma, anger, and grief.

By the way, my new Taki’s Magazine book review of The Coddling of the American Mind by Jonathan Haidt and Greg Lukianoff concludes with a discussion of how the differences between medieval European beliefs in witchcraft and modern African beliefs in witchcraft influence contemporary concepts like “systemic racism” and “implicit bias.”