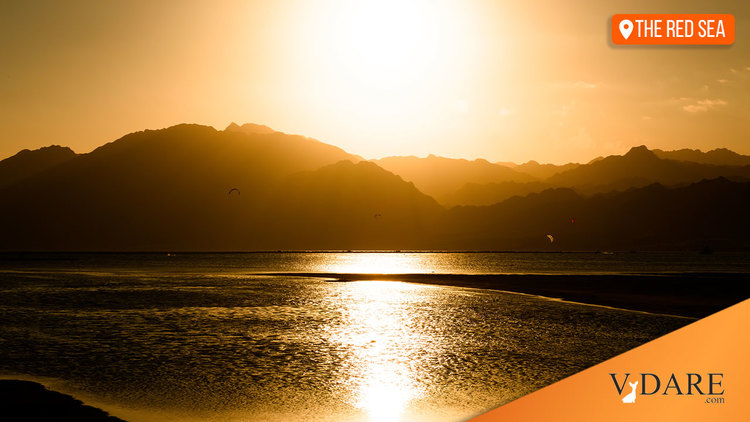 A preprint (not yet peer-reviewed) from bioRxiv:

Abstract
Extensive sequencing of modern and ancient human genomes has revealed that contemporary populations can be explained as the result of recent mixing of a few distinct ancestral genetic lineages. But the small number of aDNA samples that predate the Last Glacial Maximum means that the origins of these lineages are not well understood. Here, we circumvent the limited sampling by modelling explicitly the effect of climatic changes and terrain on population demography and migrations through time and space, and show that these factors are sufficient to explain the divergence among ancestral lineages. Our reconstructions show that the sharp separation between African and Eurasian lineages is a consequence of only a few limited periods of connectivity through the arid Arabian peninsula, which acted as the gate out of the African continent.

In other words, the Out-of-Africa event probably didn’t involve Africans crossing the Sahara but rather exiting Africa through the backdoor from, roughly modern Djibouti across the Red Sea (minimum distance eight miles) to Yemen and then up through the Arabian peninsula during a green period into the middle east, which is the crossroads of the Old World (as Noah’s sons indicate).

Middle Easterners would occasionally then cross back thru Arabia into East Africa, which is why there are genetic and cultural links between the Middle East and, say, Ethiopia and other points south. But under most climactic conditions, this was difficult, so there was not much admixture. Presumably, after the invention of herding this trip became a little more frequently feasible. And the domestication of the camel (perhaps sometime between Book of Genesis and the New Testament) made crossing the Arabian and Saharan deserts more something that could be done regularly.

The subsequent spread across Eurasia was then mostly shaped by mountain ranges, and to a lesser extent deserts, leading to the split of European and Asians, and the further diversification of these two groups. A high tolerance to cold climates allowed the persistence at high latitudes even during the Last Glacial Maximum, maintaining a pocket in Beringia that led to the later, rapid colonisation of the Americas. The advent of food production was associated with an increase in movement, but mountains and climate have been shown to still play a major role even in this latter period, affecting the mixing of the ancestral lineages that we have shown to be shaped by those two factors in the first place.

I’d add that oceans, especially the Atlantic, played a huge role in racial divergence up until ~1492.

After 1492, differential adaptation to disease limited some racial migrations (e.g., whites to the tropics) and encouraged others (Africans to the New World tropics).

That may leave homesickness as the last barrier.