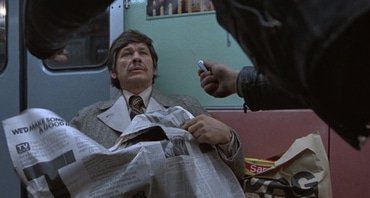 DEATH WISH At Forty: Are We Allowed To "Notice" Race NOW? 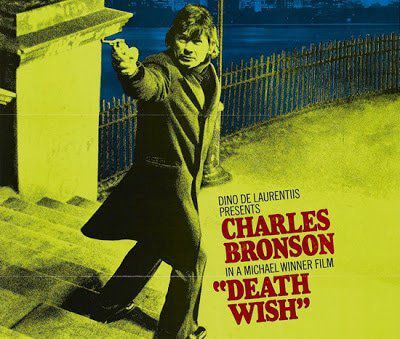 In contrast to Obama’s America, where Hollywood, television, and the Main Stream Media are working overtime to promote false consciousness about crime in America (just watch an episode of Law & Order or remember what the producer of COPS said about wanting to show only reversing the ratio of white and minority criminals (“I do that intentionally because I do not want to contribute to negative stereotypes”)  this movie packed a powerful reminder: no matter how much incessant propaganda tries to make people believe a lie, one perfectly-packaged dose of truth is enough to make it all go away.

That movie: Death Wish. To celebrate the 40th anniversary of its theatrical release, a special edition Blu Ray version was released today (February 4). [Purchase here and direct a commission to VDARE.com at no cost to you!] Never has the response of the Charles Bronson character (named, by an amazing coincidence, Paul Kersey) to the rape-murder of his wife and rape-mental ruin of his daughter looked better.

Based on a novel by Brian Garfield (interestingly, its protagonist was named Paul Benjamin and was Jewish), Death Wish spawned four sequels. But it was the compelling manner in which the original movie portrayed Bronson’s actions as justified that frightened Ebert. He said:

There's never any question of injustice, because the crimes are attempted right there before our eyes. And then Bronson becomes judge and jury—and executioner.

That's what's scary about the film. It's propaganda for private gun ownership and a call to vigilante justice.

No doubt this was exactly why the great Murray Rothbard praised the movie so much:

Death Wish is a superb movie, the best hero-and-vengeance picture since Dirty Harry. Bronson, an architect whose young family has been destroyed by muggers, drops his namby-pamby left-liberalism, and begins to pack a gun, defending himself brilliantly and uncompromisingly against a series of muggers who infest New York City. Yet he never kills the innocent, or commits excesses. Naturally, even though he is only defending himself against assault, the police, who have failed to go after the muggers and who acknowledge the fall in the crime rate due to Bronson’s activities, devote their resources to pursuing him instead of the criminals who terrorize New York. It is a great and heroic picture, a picture demonstrating one man’s successful fight for justice.

As might be expected, Death Wish has been subjected to hysterical attacks by the left-liberal critics who acknowledge the power and technical qualities of the picture, which they proceed to denounce for its “fascist ideology” (self-defense by victims against crimes) and its “pornography of violence” (in a just cause).

Don’t miss Death Wish; it says more about the “urban problem” than a dozen “message” documentaries, and it helps bring back heroism to the movies.

August 1974 issue of The Libertarian Forum

One line of dialogue in Death Wish cuts to the heart of America’s crime dilemma. While Bronson’s character is at a dinner party in New York City, he overhears a conversation between two guests about his vigilante actions:

Man: I’ll tell you one thing: the guy’s a racist. You notice he? kills more Blacks than Whites.

Woman: Oh, for Pete’s sake, Harry. More Blacks are muggers than?Whites. What do you want to do–increase the proportion of White? muggers, so we’ll have racial equality among muggers?

…like one of those bloody future cities in science-fiction novels about anarchy in the twenty-first century. Literally every shadow holds a mugger; every subway train harbors a killer; the park is a breeding ground for crime.

But as the 1970s drew on, New York City did indeed become a place where “anarchy” reigned, along with all the ills Ebert brushed aside.

And, with the repudiation of Rudy Giuliani’s reforms, it will again become a city with the increasingly “bloody future” that Ebert whined about Death Wish’s depicting.

Our friends at the New York City Police Department put out a yearly guide (Crime and Enforcement Activity in New York City).

How about rape victims/suspects over the same period?

Ebert was right to label Bronson’s Death Wish “scary,” but he was wrong about why.  The fact that, despite all the anti-gun propaganda in school, the MSM, and Hollywood/TV, that this film resonated so deeply proves that Andrew Breitbart was right when he said: “Politics is downstream from culture.”

It’s that one scene from the dinner party, when the racial reality of crime in New York City is repudiated—a powerful reminder that “noticing” is the true crime in modern America.

Because when you “notice,” and pattern recognition develops obvious truths—justifying, for example “Stop and Frisk”—it becomes apparent why, as the black and Hispanic population of New York City becomes greater, the white American population becomes less.

But this bit of dialogue between Kersey and the young husband of his destroyed daughter puts that white flight in a grim perspective:

Paul Kersey: Nothing to do but cut and run, huh? What else? What about the old American social custom of self-defense? If the police don't defend us, maybe we ought to do it ourselves.

Paul Kersey: What are we, Jack?

Jack Toby: What do you mean?

Paul Kersey: I mean, if we're not pioneers, what have we become? What do you call people who, when they're faced with a condition or fear, do nothing about it, they just run and hide?

2014 America is a less civilized place—precisely because we have been cutting and running in the forty years since Death Wish came out.

Paul Kersey[Email him] is the author of the blog SBPDL, and has published the books SBPDL Year One, Hollywood in Blackface and Escape From Detroit, Opiate of America: College Football in Black and White and  Second City Confidential: The Black Experience in Chicagoland. His latest book is The Tragic City: Birmingham 1963-2013 .