According to ABC, a Houston police officer, race unknown, shot an "unarmed" attacker also race unknown, who was punching him and has almost knocked him unconscious:

Police responded to the scene at 11600 Riderwood Drive in southwest Houston Thursday evening. According to police, the officer, identified as J. Loosmore, was walking his dog with his wife when another man's dog attacked his dog. 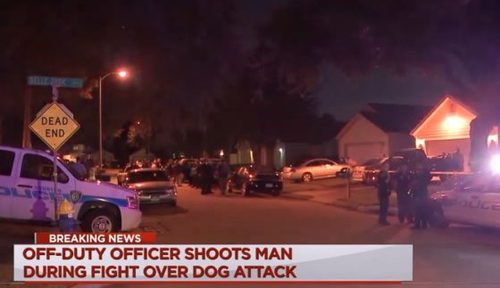 Loosmore allegedly told the man he was going to file a report. He says while he was on the phone with dispatchers, the man started punching him. Loosmore told investigators that he was afraid the man would be able to take his gun.

"He begins punching him multiple times in the head and chest. At that point in time, the officer (Loosmore) tells us he actually felt his vision grey out like he was losing consciousness," HPD spokesman Kese Smith said.

HPD: Off-duty officer shot man after he was punched during dog fight , October 13, 2016

If the account is accurate, and is supported by the physical evidence and whatever information may have been recorded in the call to the dispatcher, then this would appear to be a easily justified shooting, and a circumstance under which any citizen would have been justified in using deadly force as well.

One of the themes pushed by a rabidly anti-police Black Lives Matter movement uncritically parroted by their co-conspirators in the mainstream media is that unarmed people are not a deadly force threat.

There are more than twice as many deaths every year from the personal weapons (arms, feet, elbows and knees) of “unarmed” people than there are shotguns or rifles. This was born out again in the FBI’s just-released Uniform Crime Report for 2015.  624 Americans were kicked or punched to death by “unarmed” people in 2015. Only 252 were killed with rifles in 2015, and just 269 with shotguns.

Yes you read that correctly. 125 more people were beaten to death last year by “unarmed” people  than were murdered with rifles and shotguns, combined.

Unarmed people can very much be a lethal force threat, and using deadly force against them is often justified from a moral, ethical, and legal standpoint.

About 54 percent of known murderers were black in 2015, which suggests that blacks punched or kicked to death 337 people that year.

I discussed this at a the time of the Trayvon Martin Hoax in an article called “Unarmed” Black Teenagers—Threat, Menace, Or Both? David Frum Doesn’t Seem To Know (Frum was buying the "Trayvon was the victim" narrative) and again when 6'4", 292 pound Michael Brown attacked Darren Wilson in Ferguson.

There are two issues—the first  is that the unarmed teen may be able to kill you with his bare hands, or kick you to death after knocking you unconscious.

The second is that if he can knock you unconscious he can take your gun, and kill you—or any number of bystanders—with it.

The experience of having your vision "grey out" as if you're about to lose consciousness is called "having your bell rung" in the boxing ring.

When Darren Wilson had his bell rung by Michael Brown, who had already attempted to take his gun, he was in danger of death. The best thing that could happen in that situation is that Brown would take Wilson's gun, kick him half to death, and then shoot himself.

It's more likely that he'd kill Wilson and then kill lots of other people—the kind of thing it's a police officer's duty to prevent. When you see a graphic like this, remember that each of these unarmed teens represents the attempted murder of police officer. And blacks are much more likely to do that than whites: 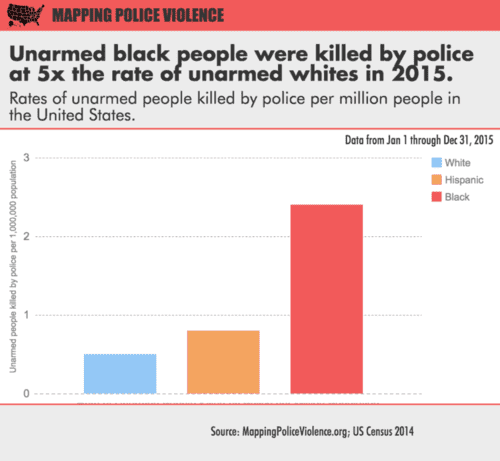 To make my point that unarmed black teens are dangerous. I titled this post "Unarmed Black Teens Kill More People Than Cholera"which sounds like hyperbole, but actually in  a typical year  there are seven cholera deaths in the United States compared with the estimated 337 killed by (mostly young) unarmed blacks.

That's because of First World water systems. The crime rate, on the other hand, suffers from Third World criminal population.