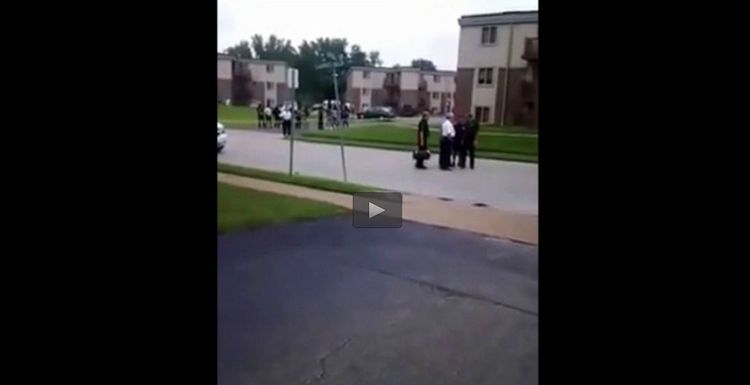 This is video taken at the scene of the incident in Ferguson. The video contains bad language and footage of Brown's dead body.

This is from A Witness Conversation Unknowingly Captured at the Scene of the Ferguson Shooting is a Game-Changer, IJReview.com, 15 hours ago

The original video poster appears sympathetic to the narrative that Mike Brown was shot unarmed with his hands in the air. But he unknowingly picks up conversation between a man who saw the altercation and another neighbor.

An approximate transcription of the background conversation, as related by the “Conservative Treehouse” blog:

#2 Because he ran, the police was still in the truck – cause he was like over the truck

#2 But him and the police was both in the truck, then he ran – the police got out and ran after him

#2 The Police shot him

This is terribly important because if Mike Brown had been shot, and he advanced towards the cop instead of surrendering, it would substantiate the narrative that the policeman shot in self-defense due to the fact that he was being threatened with severe bodily harm.

This corroborates an account of the event given by a friend of Officer Darren Wilson:

Well, then Michael takes off and gets to be about 35 feet away. And, Darren’s first protocol is to pursue. So, he stands up and yells, “Freeze!” Michael and his friend turn around. And Michael taunts him… And then all the sudden he just started bumrushing him. He just started coming at him full speed. And, so he just started shooting. And, he just kept coming. And, so he really thinks he was on something.”

Their source is The “JJ Witness Video” – Eye Witness Audio of Mike Brown Shooting States: “Brown Doubled Back Toward POlice”…, The Conservative Treehouse, Posted on August 15, 2014 by sundance.

So one thing we've heard is that Brown tried to grab the officer's gun, and a shot was fired before the the shots that killed Brown.

And then Michael just bum-rushes him and shoves him back into his car. Punches him in the face and them Darren grabs for his gun. Michael grabbed for the gun. At one point he got the gun entirely turned against his hip. And he shoves it away. And the gun goes off.

If that's the case, Officer Wilson was required by public safety responsibilities and his oath of office to try to arrest Brown. He might have let him run from a jaywalking charge, but once he was resisting arrest, trying to grab the officer's gun, leading to a shot being fired, the officer had to arrest him, even if he didn't know about Brown's previous violent crime. That's what "Darren’s first protocol is to pursue" means.

We've also heard, repeatedly, that the 6'4", 292 pound Brown had his "hands up" when Wilson shot him.  That has a a very different meaning is someone is charging towards you than it does if they're just standing there.

I hope it's obvious that it's justifiable to use a gun to defend against an "unarmed" man of the late Michael Brown's size—the legal concept is called "disparity of force."

In an article called "Unarmed” Black Teenagers—Threat, Menace, Or Both? David Frum Doesn’t Seem To Know I pointed out that some middle-class whites, living in protected environments, don't seem to realize that an unarmed black teen can kill you with his bare hands, even is he isn't a giant.

Professor Carol Swain, who is black, defended the prosecution of the Jena Six (black teens charged with assault with a deadly weapon after kicking white man savagely) by pointing out that her brother, Kevin Henderson,  who was black, had been kicked to death by five teens—who were also black.

The question for Darren Wilson is: will this evidence be suppressed by local anti-snitch culture, or by the  Obama/Holder Department of Justice? Don't expect to hear much about it in the Main Stream Media.