Quote Of The Day:"It Is Unthinkable That The President Or Congress Would Make A Decision About A Scientific *Theory* , Then Proceed To Purge From Their Posts All Who Disagreed"

Martin Gardner wrote this many years ago—he was talking about Lysenkoism. 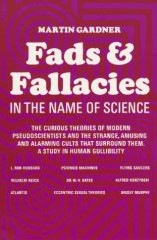 But on the whole, in contrast with other countries and other ages, our science is enjoying a relative freedom that (until very recently, at least) is perhaps its greatest in history.

Fundamentalists in the Bible Belt continue to read their dismal literature denouncing Darwin, but you are not likely to find a fundamentalist in any position of scientific authority or eminence.

Only a few southern states have laws against the teaching of evolution, and even in those states the laws are constantly evaded in schools of higher learning. Scientists in hundreds of universities and institutes are working with unrestricted vigor on projects of their own choosing. Even in top-secret war research it is unthinkable that the President or Congress would make a decision about a scientific theory, then proceed to purge from their posts all who disagreed.

Let us hope that Lysenko's success in Russia will serve for many generations to come as another reminder to the world of how quickly and easily a science can be corrupted when ignorant political leaders deem themselves competent to arbitrate scientific disputes. [Martin Gardner, Fads and Fallacies in the Name Of Science.