Why Race And IQ STILL Matters, Despite Loury And McWhorter's Objections—Because Black Failure Is Always Blamed On Racism

Blogger Education Realist has a lengthy post on a discussion between two high-IQ black intellectuals (John McWhorter and Glenn Loury ) who think discussion of racial differences in IQ should not happen outside scientific journals like the ones Phil Rushton used to publish in.

In the last segment of their recent bloggingheads discussion, John McWhorter told Glenn Loury he was writing a piece suggesting that discussions of an IQ gap be deemed unacceptable for public discourse1:

I don’t understand what possible benefit there could be. I think it should stay in the journals.

Glenn agreed, and mentioned his famous response to the conservative welcome of The Bell Curve, in which he angrily rejected Murray’s assertions.

My first, instantaneous reaction was hey, great idea.  In fact, it will save us billions. Too bad no one proposed it twenty years ago, before we wasted so much time and energy on No Child Left Behind, forcing states to report by racial demographics. Think of all the schools struggling to meet adequate yearly progress and failing because they couldn’t teach students to perform in perfectly average racial unity. Let’s be sure to tell the College Board; they’ll be happy to stop breaking out test results by race; it’ll save them so much criticism.  This will put NAEP out of business of course, so….

What’s that? You don’t think McWhorter would link banning discourse on race and IQ to ending all scrutiny of race-based academic achievement? 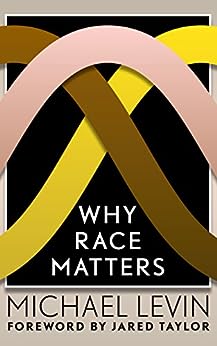 PhilosopherMichael Levin has the answer to this, in his 1997 book Why Race Matters,

“The topic of racial variation is admittedly disturbing, and in an ideal world might be passed over in silence, but accusations against whites have made such discretion impossible. The right of the accused to present his case includes the right to raise issues that distress his accuser. A plaintiff demanding damages for a broken leg cannot ask at the same time that his leg not be talked about, nor take offense when the defendant presents evidence that the injury was congenital. By claiming harm he opens the question of why his leg is game. Claiming racial harm has opened the topic of race differences. “

Of course, opening the topic  of race differences (in response to claims of white racism) is sort of what got John Derbyshire fired from National Review, and now John McWhorter (who, I remind you,  is a somewhat conservative black) has published an article saying

And of course, he doesn't just mean  obsessing, he means discussing at all. There's an online reply (the McWhorter stop-talking diktat is in the print magazine) by two people who think it should be discussed.

Very interesting that NR is publishing a debate on whether it is okay to discuss race, genes, & IQ. In April, it was "racist by definition". pic.twitter.com/hLNZL8FfvL

But I reiterate, the unscientific belief that, but for racism, blacks and whites would score equally on tests is the source of a lot of grief. Oh, and the reason Education Realist's post was titled Glenn, John, and Philip K. Dick is because science fiction author (and psychedelic drug user) Dick was the author of the maxim “Reality is that which, when you stop believing in it, doesn’t go away.”