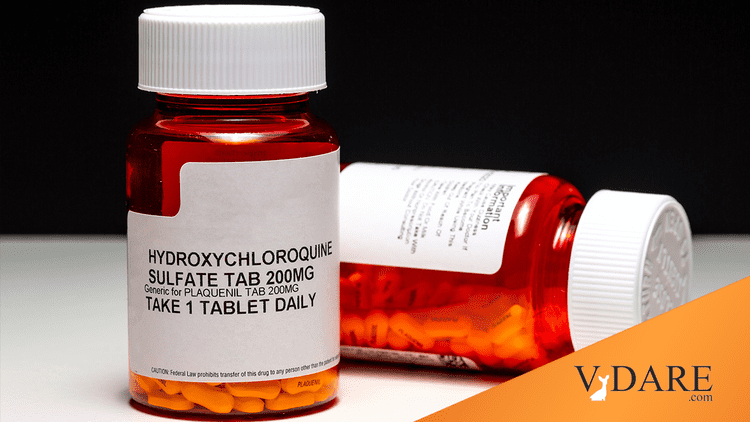 NYT: Trump Derangement Syndrome Getting in the Way of Scientific Progress, But That's Trump's Fault

From the New York Times news section an article about how Trump is ruining science … by — if you read it very carefully — causing Trump haters to become deranged with fear about a medicine that has been prescribed 5 million times per year in the U.S. for decades for run of the mill ailments like rheumatoid arthritis. I’ve cut out most of the Reader Service parts about how awful Trump is and just left the parts that tell the real story about how Trump Derangement Syndrome is slowing scientific progress.

Amid Hydroxychloroquine Uproar, Real Studies of Drug Are Suffering

The political fights around a malaria drug that President Trump says he takes daily have impeded studies into whether it works to prevent coronavirus infection or treat Covid-19 early.

WASHINGTON — President Trump’s enthusiastic embrace of a malaria drug that he now says he takes daily — and the resulting uproar in the news media — appears to be interfering with legitimate scientific research into whether the medicine might work to prevent coronavirus infection or treat the disease in its early stages. …

“It’s gotten a bad reputation only because I’m promoting it,” the president added. “If anybody else were promoting it, they would say it’s the best thing ever.”

Last week, the National Institute of Allergy and Infectious Diseases, which Dr. Fauci leads, announced a 2,000-patient study to determine whether hydroxychloroquine, when combined with the antibiotic azithromycin, “can prevent hospitalization and death from Covid-19,” joining more than 50 other clinical trials involving hydroxychloroquine that are continuing in the United States.

… Other researchers around the country said the controversy was depressing enrollment in their clinical trials.

“People who had already enrolled would say, ‘Now I’m afraid, I want to disenroll,’” said Dr. Deneen Vojta, the executive vice president for research and development at UnitedHealth Group, the insurance giant, which is conducting a smaller study of hydroxychloroquine alone.

In a draft letter to the Journal of the American Medical Association, obtained by The New York Times, members of a research consortium complained that “negative media coverage” of hydroxychloroquine — in particular the studies showing it might have harmed hospitalized patients — “directly correlated” with a drop in enrollment in trials run by institutions including the University of Minnesota, the University of Washington, Columbia University in New York and Henry Ford Hospital.

Inside the White House, the president’s trade adviser, Peter Navarro, who is an enthusiast for hydroxychloroquine and has worked with the Federal Emergency Management Agency to steer 19 million pills from the stockpile to 14 coronavirus hot zones around the country, said “hydroxy hysteria” in the news media — not Mr. Trump — was to blame.

“Has the media’s war of hysteria on hydroxychloroquine killed people?” Mr. Navarro asked in an interview. “If the scientific evidence does indeed prove that the medicine has both prophylactic and therapeutic value, the answer is yes.”

While Mr. Navarro complained that “fake news and bad reporting” had resulted in a “dramatic drop in demand for hydroxy at hospitals,” Dr. Mitchell Katz, the president and chief executive of NYC Health and Hospitals, the nation’s largest municipal health system, said hospitals and doctors became less interested in hydroxychloroquine after the F.D.A. approved another medicine, remdesivir, for treatment of Covid-19.

Hydroxychloroquine is a cheap generic while remdesivir is on patent, and even legitimately costs a lot of money to manufacture. Also, it’s possible the two medicines might have very different uses, such as one being most helpful in severe cases and the other in mild cases or even as a prophylactic.

… When Mr. Trump first began talking up hydroxychloroquine, Dr. Hernandez said, he faced questions about whether his study should be weighted toward giving the drug to more people than were receiving placebo. When he started, he said, two-thirds of more than 12,000 health care workers who have signed up for a coronavirus registry were willing to participate in his study. Now, only half are.

… Dr. Hernandez and others, including Dr. O’Neill, say that no study — even those conducted in hospitalized patients — has produced definitive results about hydroxychloroquine for the coronavirus, though several have suggested it could be harmful especially to patients with underlying heart conditions.

The medical profession has piled up a vast amount of data over the last 55 years on what the side effects of this massively widely prescribed drug can be and who should and should not take it. It’s irresponsible media scaremongering to say that hydroxychloroquine is killing people with specific heart conditions because doctors know exactly which heart conditions to avoid from decades of prescribing it to millions of malaria, lupus, and rheumatoid arthritis patients.

… A small study in Brazil was halted after patients taking a high dose of chloroquine — a predecessor to hydroxychloroquine that researchers consider less safe — developed irregular heart rates that increased their risk of a potentially fatal heart arrhythmia.

Dr. Christine Johnston, an associate professor of medicine at the University of Washington who is hoping to enroll 630 people in a trial examining the effectiveness of hydroxychloroquine in those recently infected, said many of her patients conflated the Brazil study with her drug. She, too, has seen a dip in enrollment.

“People put these things together in their minds but they are actually very different,” she said.

Hydroxychloroquine was developed in the 1960s in part to get around some of the nasty side effects of chloroquine.

In contrast to the MSM scare stories, here is the beginning of the Wikipedia page on the medicine:

Hydroxychloroquine (HCQ), sold under the brand name Plaquenil among others, is a medication used to prevent and treat malaria in areas where malaria remains sensitive to chloroquine.[2] Other uses include treatment of rheumatoid arthritis, lupus, and porphyria cutanea tarda.[2] It is taken by mouth.[2] It is also being studied as a treatment for coronavirus disease 2019 (COVID-19), although evidence for its efficacy is lacking.[3][4] A further clinical trial is now under way Hydroxychloroquine and Zinc With Either Azithromycin or Doxycycline for Treatment of COVID-19 in Outpatient Setting.[5]

Common side effects include vomiting, headache, changes in vision, and muscle weakness.[2] Severe side effects may include allergic reactions, vision problems, and heart problems.[2][6] Although all risk cannot be excluded, it remains a treatment for rheumatic disease during pregnancy.[7] Hydroxychloroquine is in the antimalarial and 4-aminoquinoline families of medication.[2]

Hydroxychloroquine was approved for medical use in the United States in 1955.[2] It is on the World Health Organization’s List of Essential Medicines, the safest and most effective medicines needed in a health system.[8] In 2017, it was the 128th most commonly prescribed medication in the United States, with more than five million prescriptions.[9][10]

That doesn’t mean it’s going to work for this novel disease. The odds are much against any single drug already approved for safety happening to also be effective against this new problem. But if you were rank ordering existing drugs in terms of likelihood of perhaps having some good effect, the word of mouth out of Wuhan and some other places would put hydroxychloroquine toward the top of the list of drugs to check first.