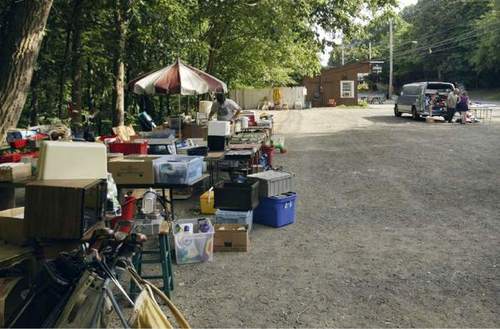 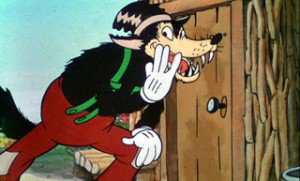 The Big Bad Wolf famously huffed and puffed and blew the little pigs’ houses down. Social Justice Warriors in the Democratic/ Main Stream Media complex are trying the same technique on the GOP over the Confederate Battle Flag (successfully) and on Donald Trump over his mentioning hatefacts about Mexican immigration (unsuccessfully so far).

But the bottom line: Cultural Marxist totalitarianism is coming to an America near you. In fact, it’s already here:

WALLINGFORD — Local police received a complaint when a shopper discovered Nazi and Confederate merchandise at a popular flea market last weekend, according to Chief William Wright.

An officer responded to the Redwood Flea Market on South Turnpike Road Sunday to investigate the report and found Nazi and Confederate memorabilia for sale. He told the complainant, who is Jewish, there was nothing police could do because the merchandise was on private property.

Putting aside the extraordinary level of interpersonal aggression that would cause someone to feel entitled to impose his personal preferences on a scene that could have been found at any American country fair for over half a century, consider the fact that the police felt obliged to respond—and to suggest that they would have taken action if the flea market had been on public property i.e. a town fair ground.

Here’s the huffing and puffing:

The complainant, a town resident, feared possible backlash and asked to remain anonymous. He told the Record-Journal that in addition to several showcases there was Nazi merchandise, including German helmets with swastikas, images of Hitler, and Jewish stars of David, in a truck.

“I was shaking and almost vomiting,” he said. “I had to run. My grandmother had numbers,” he said, referring to the Nazi system of tattooing numbers on prisoners.

And what has this got to do with the Confederate flag?

To its credit, the local spokesman for the NAACP was restrained:

Jason Teal, president of the Meriden-Wallingford NAACP, said he was not familiar with the flea market and had not heard any complaints about the merchandise being sold there.

But the local spokesman for the Anti-Defamation League was in full Cultural Marxist mode:

Joshua Sayles, assistant regional director of the Anti-Defamation League in Connecticut, said selling Confederate and Nazi goods isn’t a moral issue if the merchandise consists of authentic war pieces purchased by a serious collector. But too often, they are cheap replicas and used as symbols of hate.

“It’s not the first time I’ve heard of this,” Sayles said. “It’s unfortunate that under the law people have the right to sell these things; but it doesn’t mean they should sell these things. It’s not a crime but I would call it hate…”

(Emphasis added). In other words, the Anti-Defamation League would like to ban the sale of Confederate memorabilia even on private property.

Huffing and puffing is going on among MSM Big Feet too: How Views Like Trump's Became Socially Taboo|The responses to his immigration rhetoric show how much American political views have changed, by Peter Beinart, The Atlantic, July 10, 2015.

Beinart’s argument is that a species of social pressure—as distinct, it should be noted, from rational argument—is what has won the day for homosexual marriage and a variety of other causes. (In Trump’s case, of course, this means suppressing the truth about Mexican crime, but Beinart is not concerned with this nuance). Needless to say, the principle that individuals should be punished in their private and professional lives for their beliefs, or supposed beliefs, about public affairs is quintessentially totalitarian. But obviously it’s already underway in Wallingford CT.

You might wonder how “taboo” Trump’s views can be given his current standing in the polls [Donald Trump tops another poll. Will he stay there? By Sara Aridi, Christian Science Monitor, July 11, 2015] and for that matter the fact that Ann Coulter’s Adios America! has been on the New York Times Best-Seller List for five (5) weeks.

But you would be missing the extraordinary narrow social, and even geographic, circle in which Beinart, and much of the MSM elite, lives. This is from Wikipedia (accessed 7/12/15 at 11:10 pm):

Beinart was born in Cambridge, Massachusetts, United States in 1971. His parents were Jewish immigrants from South Africa (his maternal grandfather was from Russia and his maternal grandmother, who was Sephardic, was from Egypt).[3][4][5] His mother, Doreen (née Pienaar), is former director of the Harvard's Human Rights film series at the John F. Kennedy School of Government, and his father, Julian Beinart, is a former professor of architecture at the Massachusetts Institute of Technology.[1] His stepfather is theatre critic and playwright Robert Brustein.[6] Beinart attended Buckingham Browne and Nichols School in Cambridge. He then studied history and political science at Yale University, where he was a member of the Yale Political Union, and graduated in 1993. He was a Rhodes Scholar at University College, Oxford University, where he earned an M.Phil. in international relations in 1995.[7]

..Since 2003, Beinart is married to Diana Robin Hartstein, a lawyer. They live with their two children in New York City.[7]

Coincidentally, this means that Beinart, like Nikki Haley, is one of those second-generation immigrants whose understanding of America Ann Coulter (quite reasonably in my immigrant view) has questioned.

Sunday’s Meet The Press seems to have consisted entirely of huffing and puffing, about the Battle Flag and about Donald Trump. It did contain this key passage:

Doris, we've seen versions of Donald Trump over the years. And I just don't mean versions of this Donald Trump, but I mean, you know, a George Wallace and things like this. This does happen. And they do strike a chord.

This of course is a ludicrous statement. George Wallace had a long record as an outspoken segregationist. Trump’s very mild, and brief, comments on Mexican immigrant criminality are simply several orders of magnitude less dramatic.

I think the important thing is not to understand the chord he's striking. But we, as journalists, have a responsibility to question is this the kind of person who could truly be a leader, a person so quick to anger, a person who yells at other people, a person who bullies, person who's loose with the facts, saying lots of things that aren't true, person who has conspiracy theories about whether Obama was born here, about vaccines, about climate change is a hoax?

I think it's too much to give him the credit that he's entertaining, and that we like what he's saying but it's interesting. We, as journalists, have a responsibility to figure out which candidates are likely to be our leaders. I remember talking with Tim Russert about this. Rather than who's got the most money, who's saying the most outrageous thing, who has the highest polls, who is likely to be a leader? They've shown qualities already. This guy has shown qualities I cannot imagine him as a presidential leader.

What Kearns Goodwin, a long-time fixture of the Democratic/ MSM complex despite being involved in plagiarism scandals, is unblushingly calling for here is a blatant assertion of elite media power: ignore public discontent, decide who is an appropriate candidate.

Orwell called it the Ministry of Truth.

American politics are now profoundly unstable. The Obama Administration is, bluntly, a Minority Occupation Government. Eventually, the Left may succeed in Electing A New People—but for the next few election cycles, whites still cast by far the largest proportion of votes. At all costs, the Left must keep the historic American nation from uniting—which it alarmingly began to do (no thanks to the GOP leadership) in the 2010 and 2014 elections—and cutting off immigration. This explains the mounting hysteria of the Left, and its attempts to institutionalize itself through anti-Hate laws and other totalitarian techniques.

Let’s look on the bright side. Peter Beinart concluded his Atlantic piece on a surprisingly gloomy note:

So what happens to the millions of Americans who have suddenly found their views deemed beyond the pale by America’s political, economic, and cultural elites? If history is any guide, they’ll go underground…

Sooner or later, political upheaval will spark new movements aimed at distinguishing between those Americans who deserve equal citizenship and those who don’t. And as [Bobby] Jindal’s career suggests, these movements may prove more multicultural than we can today imagine.

I don’t look forward to the return to political acceptability of forces aimed at denying certain Americans the same rights and dignity as everyone else. But the tradition is too deeply rooted in our national character to ever truly die.

Translated into American: The South Will Rise Again.