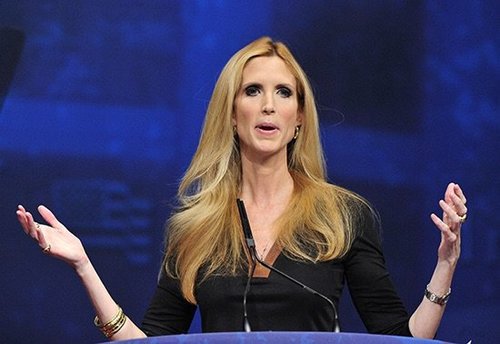 A few days ago, I tweaked The American Spectator's Aaron Goldstein for getting all pompous because Ann Coulter misspoke slightly while criticizing South Carolina governor Nikki Haley's capitulation on the Confederate Battle Flag In Defense Of Ann Coulter—Nikki Haley IS Of “Immigrant Stock”. I added:

(Ask Goldstein, who does not disclose that he is himself an immigrant, why TAS has not yet reviewed or even mentioned Adios America! Ask TAS here).

Goldstein responded, again pompously, that he is a dual citizen

Anyone who has taken the time to read my pieces (such as this recent one about Paul Shaffer) will know that I was born and raised in Canada. My mother is Canadian and my father is American. I, along with my three siblings, had a claim to U.S. citizenship.

(I certainly had not taken the time to read Goldstein's pieces, and in fact had never heard of him, but the link is to a charming discussion of his home town of Thunder Bay, Ontario,  which I am probably one of the few VDARE.com readers to have visited.)

Goldstein's TAS bio says only that he "was born in Canada" so I don't see how Goldstein can claim I was "wrong." Unlike Ted Cruz, he did have a Canadian citizen parent. It's perhaps a Talmudic point whether this makes him technically an "immigrant," but he is clearly of of immigrant stock, and did not disclose it.

Or, as the amazing Coulter put it in firing back:

Goldstein says pompously "I cannot speak as to why my colleagues here at TAS have yet to review Coulter’s latest book."

Why not? Doesn't he talk to them? Let me speak for him: because TAS, like so many neoconservatives and Conservatism Inc. types, and probably Goldstein himself, have an emotional block about immigration that has kept the issue out of American politics until it may be too late.

TAS has still not reviewed Adios America. There is now one just (1) reference to it ("aside from Ann Coulter, whose seriously detailed new bestseller Adios, America is a chapter and verse on [illegal immigrant crime]") which appears in Jeffrey Lord's solid NBC Fires Trump, Keeps Sharpton (July 2, 2015)