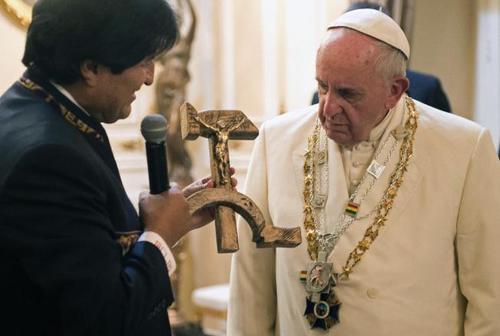 Socialism And The Pope: Capitalism Diabolic?

On arrival in La Paz, Pope Francis was presented by Bolivian President Evo Morales with a wooden crucifix carved in the form of a hammer and sickle, the symbol of Lenin, Stalin, Mao and Fidel.

Had Pope John Paul II been handed that crucifix, he might have cracked it over Evo's head. For John Paul II had seen up close what communism did—to his country, his church and his people in 45 years of Bolshevik rule.q

On his arrival in the Nicaragua of Daniel Ortega in 1983, Pope John Paul castigated a priest-collaborator who dared to serve that Sandinista Marxist regime as culture minister.

And, while in Managua, he warned Catholics they were being threatened by "unacceptable ideological commitments."

Today we have a pope for whom free-market capitalism is the "unacceptable ideological commitment."

As The New York Times reports, Pope Francis does "not just criticize the excesses of capitalism. He compares them to the 'dung of the devil.' He does not simply argue that 'greed for money' is a bad thing. He calls it a 'subtle dictatorship that condemns and enslaves.'"

In South America, Pope Francis "made a historic apology for the crimes of the Roman Catholic Church during the period of Spanish colonialism—even as he called for a global movement against a 'new colonialism' rooted in an inequitable economic order."

"The Argentine pope seemed to be asking for a social revolution."

Now the church has a long tradition of criticizing capitalism, dating back to the encyclical Rerum Novarum in 1891.

In American Church: The Remarkable Rise, Meteoric Fall, and Uncertain Future of Catholicism in America, author Russ Shaw deals with the causes and consequences of what some Catholics contend was a fatal embrace of a heretical "Americanism" in the 19th century.

This pope goes beyond that. His words about capitalism echo what Cold War Catholics said of communism, that it is a tree poisoned at the root that can yield only bad fruit, and, as the Gospel teaches, ought to be cut down and cast into the fire.

What is wrong with the pope's neo-socialist sermonizing?

While capitalism does indeed generate inequalities, freedom, too, produces inequality. For all men and all women are unequal in abilities, energy and opportunities. In a free society, some inevitably succeed, others fail.

For as the Biblical parable teaches, some are given 10 talents, others two, and God judges us on how well we use the talents we were given. The only way to achieve absolute equality is absolute tyranny, the remorseless redistribution of wealth by an all-powerful regime.

The pontiff says the capitalist "idolatry of money" creates "the dictatorship of an impersonal economy lacking a truly human purpose." But it is egalitarianism that has proven to be the road to dictatorship, dictatorships run by egalitarians in the name of the "proletariat."

Free enterprise has brought more millions out of poverty, enabled more billions of people to live longer, freer, healthier and happier lives, and produced more widespread prosperity than any other economic system.

What is the superior system the pope believes we should adopt?

What has Argentina produced but an economically failed state, incompetent socialist rulers, and an occasional Peronista in sunglasses and shiny boots? Is Latin America a fine model?

The pope used the phrase "dung of the devil." Is that not a good description of Karl Marx's Communist Manifesto and Das Kapital? And is not satanic the precise word to describe the scores of millions of dead that 70 years of Marxist-socialist ideology produced?

As for the pope's apology for the sins of Spanish Catholicism in Latin America, why does he not speak up for the culture Catholicism helped to create, the eradication of paganism, and the termination of such practices as human sacrifice among the indigenous peoples?

But, then, we Americans are no strangers to "apology tours."

The pope is calling for a "social revolution." But what country, among the 190-plus in the U.N., comes closest to the utopia the pope has in mind? Or does his utopia exist only in the mind?

The pope is saintly man. But he has no special understanding of economic systems or of climate change. He is the Vicar of Christ, of the Savior sent by the Father to teach us what we must believe and how we must live to attain eternal life.

Christ did not come among us to end colonialism, or redistribute wealth, or start a social revolution against the empire of the Caesars.

As he told Pontius Pilate, "My Kingdom is not of this world."

Pope Francis is the infallible custodian of that truths Christ taught. Is that not sufficient, Your Holiness? Why not leave the socialist sermons to Bernie Sanders and Elizabeth Warren?