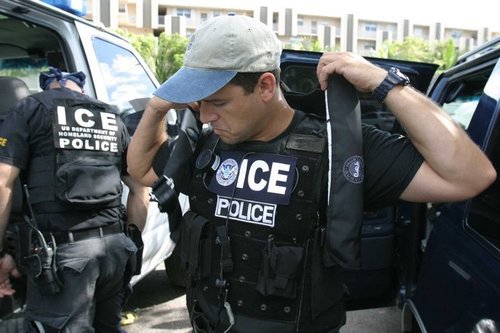 Five years ago we alerted our readers to a new initiative at Immigration and Customs Enforcement (ICE). In place of the classic immigration raids, in which hordes of ICE agents swooped down on companies suspected of employing illegal aliens, the Obama Administration would send a handful of the agency’s auditors armed with computerized payroll and Social Security records.

No more photo ops. No press coverage. But more employers arrested or fined, and more illegals displaced from jobs that Americans desperately need.

That was the implication.

ICE’s employer audit regime was more than a year old when our article was published. We expected to find hard data comparing results under the new enforcement technique versus the old way. We came up short:

“Evidence, please? Well, there really isn’t any. We don’t know how many illegals were arrested in the workplace last year or how many were fired by employers seeking to avoid criminal prosecutions. For some (not so strange) reason ICE’s latest “Workplace Enforcement Overview” does not present enforcement activity for FY2009, the first year President Obama could sway the agency’s agenda.”

Our article was entitled If Obama Has Stepped Up Enforcement, Why Suppress The Numbers? [July 21, 2010]

Now we know why. 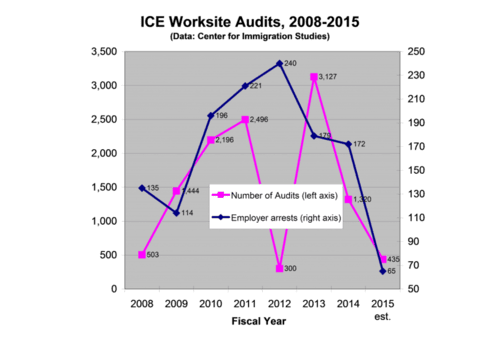 In the first five months of FY2015, ICE conducted just 181 workplace audits and brought charges against just 27 employers. Extrapolating that paltry workload, CIS projected 435 audits and 65 employer arrests for all of 2015.

This is a small fraction of the worksite activity ICE completed in 2013, when more than 3,000 companies were audited and 179 employers were arrested.

The number of employer fines collected by ICE also has also dropped, from $9.48 million in FY2013 to $4.620 million projected for FY2015. About 8 million illegal aliens are estimated to be working in the United States today, so the Administration is currently fining employers an average of 58 cents per illegal alien worker. Not exactly a fearsome prospect [5 facts about illegal immigration in the U.S., by Jens Manuel Krogstad and Jeffrey S. Passel, November 18, 2014]

In fact, the audit approach to interior enforcement is hardly new. The practice peaked in the Clinton years, when, on average, more than 1,000 companies per year were fined for hiring workers with bogus Social Security numbers. It collapsed under George II.

Then, as now, civil fines were trivial—a slap on the wrist for what employers increasingly regard as a mere paperwork violation: putting the wrong Social Security number on a federal form. Employers often pay civil fines without bothering to replace their illegal workers. And who can blame them: Even when ICE has evidence implicating employers, the agency tends to back off if the employer pleads ignorance or fights the fine.

Jessica Vaughan, the CIS’s Director of Policy Studies and author of the report, suspects that a key Obama Administration operative may be responsible for this year’s sharp drop in worksite enforcement:

It is difficult to compare cases, because each has different circumstances, but in 2014, an ICE investigation led by the agency’s New York and Virginia offices resulted in federal prison sentences of 10-20 years for five defendants who pled guilty to wire fraud and harboring illegal aliens at 7-Eleven stores. The employers also forfeited franchise rights to 14 convenience stores and other assets worth more than $1 million, and paid $2.6 million in restitution and back wages to a few dozen illegal employees. Experience shows that those kinds of sanctions are taken seriously by employers and have a chilling effect on illegal hiring.

Ironically, the 7-11 case, one of the most significant illegal employment cases in ICE history, was prosecuted by then-U.S. attorney Loretta Lynch, who is now the U.S. attorney general.

Lynch’s views appear to have evolved rapidly since then. During her confirmation hearing just a few months later, Lynch stated that she believes that illegal aliens have a right to work in the United States.