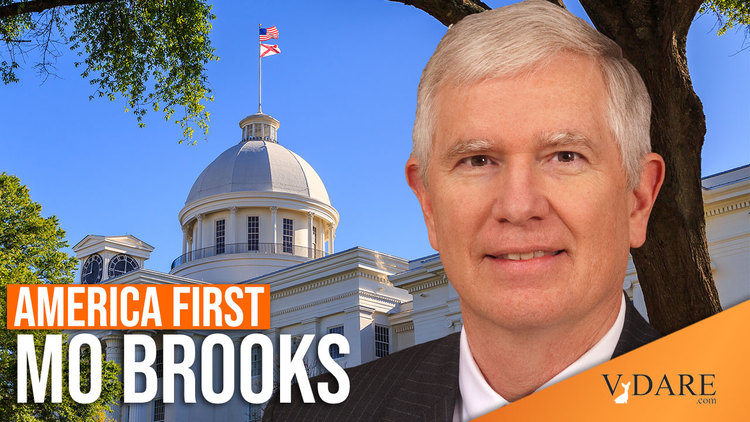 America-First Brooks vs. Business-First Britt In May 24 Alabama Senate Primary

The Alabama Senate Primary could determine the GOP’s future. Rep. Mo Brooks, backed by Donald Trump, stands for America First. Katie Britt, backed by the retiring Sen. Richard Shelby, represents the establishment. Polls show the two in a virtual dead heat, with a third candidate, Mike Durant, trailing closely behind [Dueling polls show competitive Alabama Senate race, by Todd Stacy, Alabama Daily News, February 3, 2022]. The race is one of the many competitive primaries this season that pits standard-issue Republicans against insurgent immigration patriots. If Brooks wins, he will demonstrate the potency of national populism and be arguably the Senate’s most reliable immigration patriot. A loss will show how much work immigration patriots must do to make the GOP a genuinely America First party.

Brooks is one of Congress’s most trustworthy immigration patriots. He led the fight against Amnesty and has backed several initiatives to reduce immigration. Brooks’s recent efforts include being one of the proud few Republican lawmakers who pressed Trump to expand and extend his immigration moratorium in 2020. In this congressional term, he introduced a bill to make e-Verify mandatory nationwide and cosponsored a bill to eliminate birthright citizenship. Besides immigration, Brooks is not afraid to speak truth to power. He has long denounced the Left’s “War on Whites” and has refused to apologize for noticing the obvious. He was also one of the 13 Republicans who voted against making the anti-white “Juneteenth” a federal holiday.

But his immigration platform is what matters most for VDARE readers. Notably, he’s the lone candidate to call for reducing legal immigration.

No nation can exist without borders. I strongly believe in border enforcement and strictly upholding America’s laws against illegal immigration. I support rational levels of legal immigration that leads to a stable rather than continually growing US population. America simply must limit the flow of people into our country to preserve our natural environment and resources. …

Policy makers’ primary concern in all public policy matters should be the well-being of America’s native workforce—especially our most vulnerable citizens who are hurt by additional competition from low-skilled immigrants. As your Senator, I will work to make sure that we pass immigration laws that are aimed at protecting American workers.

His support for immigration reduction makes him stand out not only in Alabama, but also among Republicans in general. Too many are content to rail against illegal immigration. Brooks isn’t one of them.

In stark contrast, Katie Britt burbles bromides about the border. She doesn’t discuss e-Verify, birthright citizenship, Amnesty, or even deportation. But worse than that, Britt endorses mass legal immigration!

The Biden Border Crisis is also unfair to those that come to America the right way—legally—in pursuit of the American Dream. I support legal immigration that promotes growth for Alabama families, jobs and communities.

That paragraph alone is disqualifying. But it’s the reason the establishment likes her. A former aide to the retiring Shelby, she’s the president and CEO of the Business Council of Alabama, a long-time immigration booster. In 2012, it urged Alabama to change its laws that made it harder for illegals to dwell in the state [Business Council of Alabama pushes for Alabama immigration law revisions, by Martin Swant, AL.com, April 12, 2012]. In 2013, the BCA endorsed the Gang of Eight Amnesty, saying it would “retain the best talent and the workers we need” and “keep faith with America’s legacy as an open and welcoming society.” Business First Republicans always want more cheap labor.

Britt is a poor alternative to Brooks.

Mike Durant is not as bad as Britt. Durant was the Army helicopter pilot captured by Somali militiamen in the 1993 Black Hawk Down incident. He presents himself as a political outsider in the primary battle. His immigration stance does not mention legal immigration, but he does insist he opposes Amnesty and supports deporting illegals.

Mike Durant believes we need to build the wall that President Trump started, but Joe Biden suspended. He opposes any pathway to citizenship that rewards law breakers and would deport illegals back to their country of origin, forcing them to come here through legal channels.

The best of the pack is clearly Brooks. But Brooks faces a brutal primary. Two recent polls show how close the race is. A Club for Growth poll released last week shows Brooks ahead with 35 percent support, Durant in second with 30 percent, and Britt in a close third with 25. A poll released by a pro-Britt firm found her with a narrow lead of 29 percent to Brooks’s 28. Durant polled at 23 [Dueling polls show competitive Alabama Senate race, by Todd Stacy, Alabama Daily News, February 3, 2022].

Yet Britt leads in fundraising with $5 million. Durant has raised at least $4 million. Brooks has raised only $2.2 million. Britt has the support of establishment fundraising channels. Senate Minority Leader Mitch McConnell is pushing his allies to back Britt and fund her campaign, which has provoked the ire of Trump [Trump says McConnell ‘wasting money’ on Alabama Senate primary, by Carly Roman, Washington Examiner, July 10, 2021]. Alabama Sen. Tommy Tuberville and South Carolina Sen. Lindsey Graham appear to support Britt as well. Graham says Britt is the better candidate because she will apparently help the GOP “grow demographically” [Senate Republicans quietly buck Trump in Alabama race, by Natalie Allison, Politico, December 2, 2021].

Brooks’s performance in the polls and his lackluster fundraising has reportedly frustrated Trump. But these could very well be reports exaggerated by rival campaigns to hostile Mainstream Media Leftists. Trump has not backed off from his endorsement and his move will likely decide the winner [In Alabama, Brooks looks to redeem himself with Trump amid campaign struggles, by Gabby Orr and Manu Raju, CNN, December 17, 2021].

To compensate for her lack of a Trump endorsement, Britt claims Brooks is somehow part of the political establishment. “He’s the Joe Biden of Alabama: 40 years running for office, six terms in Congress, and nothing to show for it but empty words and more money in his pocket,” Britt spokesman Sean Ross told Michael Scherer of the Washington Post. “It is clear that Alabamians are ready for fresh blood to shake things up, and that’s why he is in full meltdown mode” [Donald Trump’s endorsed candidate struggles as old and new Republican parties clash in Alabama Senate race, December 20, 2021].

This is a ridiculous attack considering Britt’s past. There’s nothing more establishment than being the head of the Business Council of Alabama.

The primary is set for May 24. If no one gets 50 percent, the race goes to a runoff. And as it stands now vis-à-vis the polls, that could be where the race is headed. Brooks needs high-profile names to campaign for him, primarily Trump. The former president did hold a rally with the Senate candidate in August. He will probably do another for Brooks if he thinks his reputation is on the line in the Alabama primary. Trump hates for his candidates to lose. He wants kingmaker status and for his endorsement to guarantee victory. He might pull some strings to help Brooks seal the deal.

Brooks can also get big names such as Marjorie Taylor Greene to campaign for him. Greene drew sizable crowds for J.D. Vance in Ohio [Marjorie Taylor Greene endorses GOP Ohio Senate candidate JD Vance, by Teaganne Finn, NBC News, January 25, 2022]. She can certainly do the same in Alabama, a state right next door to her native Georgia.

Alabama is one of the flagship primaries of the 2022 cycle. It can either mark the GOP’s shifting toward a more nationalist direction with Brooks, or, with Britt, can be a sign that the party is returning to its Business First, pre-Trump self.

It’s a must-win race for Brooks, and for immigration patriots not only in Alabama but also across the nation.