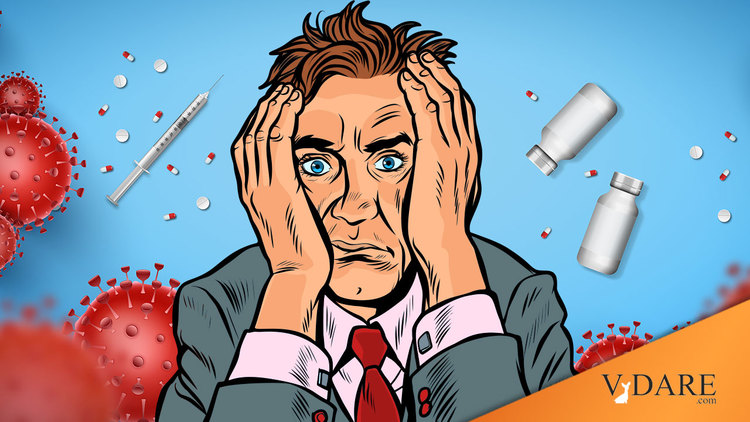 Yes, Virginia (Dare), “Mass Formation Psychosis” Is A Thing—And It Applies To BLM As Well As COVID

Dr. Robert Malone, whose research helped develop the mRNA vaccine, recently suggested on The Joe Rogan Experience that the public hysteria about COVID-19 has been an example of “Mass Formation Psychosis.” Despite the subsequent screeching, I think he might be right. I think it applies to the Black Lives Matter hysteria of 2020 too.

Various well-known but out of date musicians, such as Neil Young, have withdrawn their music from Spotify in protest at The Joe Rogan Experience being allowed to use the same platform and so share “misinformation” [Timeline of a Crisis: Spotify, Neil Young and Joe Rogan, by Diana Bradley, PR Week, February 1, 2022]. Naturally, this kind of petulant action implies these musicians—assuming they are not merely virtue-signaling—have been “triggered.” They are experiencing “cognitive dissonance,” where there is a painful disconnect between how they want the world to be and how it is, with the result that they try to shut down the source of “dissonance.”

But there’s a problem with this appeal to authority for Leftists: until 1973, this same manual was quite clear that homosexuality was a mental disorder [Out of DSM: Depathologizing Homosexuality, by Jack Drescher, Behavioral Sciences, 2015].

Reuters also “fact checked” the “Mass Formation Psychosis” concept and rolled out compliant academics to declare that it is “reductionist”—although all science tries to reduce things down to the simplest explanation—and, of course, not in the Diagnostic and Statistical Manual of Mental Disorders [Fact Check—No evidence of pandemic ‘mass formation psychosis,’ say experts speaking to Reuters, by Reuters Fact Check, Reuters, January 7, 2022].

However, I can’t find any media accounts that have looked in any detail at Mass Formation Psychosis, so I think it’s time to do so.

Dr. Matthias Desmet is a lecturer in psychoanalytic psychotherapy at Ghent University in Belgium and it is upon him that Robert Malone drew. Specifically, he drew on an interview that Desmet gave in November 2021.

According to Desmet, COVID-19 had led to large scale “mass formation.” He does not use the term “psychosis.” When humans, as pack animals, are subject to extremely difficult and frightening conditions, they crave stability and order. This elevated stress makes them susceptible to a kind of “mass hypnosis” at the hands of those who can provide them with the order which they crave and, so hypnotized, they can be persuaded to do irrational or evil things.

According to Desmet, there are four key conditions that permit the emergence of mass formation and all of these have been met of late. These are:

If we add to these conditions a specific object of intense anxiety—the Great Recession, or the COVID Pandemic—then you have ideal conditions for “Mass Formation.”

According to an editorial pithily summarizing the Desmet interview:

Participation in the strategy has nothing to do with facts; it’s to preserve this new social bond created by fighting together to defeat the Object of their collective anxiety.  By obeying the strategy, people can go from a very negative, isolated state to the polar opposite—a state of maximum connectedness. That creates a kind of mental intoxication that makes people willing to go along with anything, even if it is utterly wrong and illogical, or if they stand to lose everything that is important to them personally. They parrot the corporate narrative and adopt the same authoritarian, shaming language they hear from their leaders [EDITORIAL: Has everyone gone insane? Check your mass formation, Wisconsin Citizens Media Cooperative, November 5, 2021].

We can also see how this applies to the Black Lives Matter Hysteria of 2020. The COVID lockdown had interfered with the maintenance of social bonds and there was a very high level of pent-up anxiety, due to fear of the disease. The highly anxious were able to alleviate this by making themselves feel better through moral protests. The result was an extreme “Mass Formation” situation, which sucked in vast numbers of people.

I should note that one form of attack against the Mass Formation Psychosis theory is that it is based in psychoanalytic theory. The original concept—“Massenbildung”—is, in effect, drawn from the works of Sigmund Freud, according to an exploration of its history [Group formation and ideology. Text and context, by M. Hernandez, International Journal of Psychoanalysis, 1988].

Desmet is a psychoanalyst himself, who discusses the concept in terms of struggling against “the Object” and “free floating anxiety,” which is a general sense of anxiety that is somehow disconnected from its original cause. But philosopher Ernest Gellner fairly comprehensively proved in his book The Psychoanalytic Movement: The Cunning of Unreason that psychoanalysis works no better than any other kind of therapy and most of models cannot be reduced to science.

The Mass Formation Psychosis theory, however, almost certainly can be reduced to science. There is abundant evidence from the scientific study of religion that people become more religious at times of intense stress and especially during heightened mortality salience [The Origin and Evolution of Religious Pro-Sociality, by Ara Norenzayan and Azim Shariff, Science, 2008]. In other words, we become more indoctrinatable—hypnotizable—at times of stress, putting us in touch with our “cognitive bias” to be religious. According to psychologists of religion, such as Pascal Boyer, religion is based around dogmas and blind belief, collective rituals to please the gods and ward off evil (getting the Vax?), obedience to authority and, often, the casting out of heretics [Religion Explained, by Pascal Boyer, 2001].

“Mass Formation,” in other words, is what the late biologist E.O. Wilson called “consilient” [Consilience, by Edward O. Wilson, 1998]—it is reducible to hard science, even if it has been developed in the social sciences or in psycho-analysis.

It is not, as CNet’s Gonzales claims, “bunk.” It is very real.