A Newsman's Thoughts On The Buffalo Beheading And Other Atrocities

I am a newspaper editor somewhere in America. For reasons that will become obvious, I am not able to reveal my real name.

In February, Muzzammil Hassan, the founder of Bridges TV, his effort to combat the widespread negative "stereotypes" of Muslims, was arrested for beheading his wife, Aasiya.

For The Buffalo News, the beheading was a chance to "focus" on domestic violence. [A history of abuse preceded Orchard Park beheading, February 22, 2006]

The New York Times—the "paper of record", as they say—also suggested it was a case of routine domestic violence and quoted a Muslim imam. "This was not an honor killing, no way," said he. "It has nothing to do with his faith."[Upstate Man Charged With Beheading His Estranged Wife, By Liz Robbins, February 17, 2009] Muslims were "outraged" at the idea, the NYT averred. The paper offered no counterpoint to the Imam, who supported his asseveration by saying that Mrs. Hassan was "more of a practicing Muslim" than her husband.

Somehow, the NYT missed other details about Mrs. Hassan's suffering, reported at Fox News.com. She was subjected to "'physical confrontations off and on' for their entire eight-year marriage that had recently escalated to death threats. The grounds for divorce were 'cruel and inhuman treatment,' [the lawyer] said, referring to multiple prior incidents of abuse." [Beheading in New York Appears to Be Honor Killing, Experts Say, February 17, 2009, By Joshua Rhett Miller]

Unlike the Times, Fox News found an expert to explain why Mrs. Hassan could very well have been the victim of an honor killing.

The NYT published just one story about the event in the week that followed Hassan's arrest. Its coverage of this very real crime was eclipsed by, say, the paper's coverage of the fictitious rape story of a black stripper.

Where are the stories about Muslim violence against women? The follow-ups on other honor killings in this country? The religious expert commenting on the Koran's injunctions on castigating wives? How could the Buffalo News publish a story about this without once mentioning the possibility that Mrs. Hassan was victim not a "domestic violence" but a misogynistic religion? 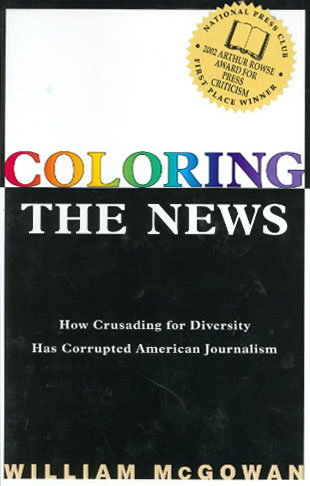 As William McGowan reported in Coloring The News: How Crusading For Diversity Has Corrupted American Journalism, that's just the old grey lady and her lesser cohorts doing business as usual. Readers of VDARE.COM need no recitation of the MSM's systematic repression of any connection between immigrants and crime, race and crime or any other unpleasant pathologies traceable to alien cultures and religions. The Hassan case was just more of the same.

Most observers will blame this on "liberal bias" in the news media. And it is certainly true that most reporters and editors in this country are liberals. They likely voted for Barack Hussein Obama by a margin of 90 percent or better.

Yet the word "bias" can't explain how reporters and editors can so routinely and reliably exclude facts inhospitable to their world view, and it wrongly implies that they consciously distort the day's news to do so.

Anyone who has worked in a daily newsroom knows writers and editors don't really have the time, on deadline, to spin stories. Editors take what the reporters give them. They correct obvious errors, ask questions about content and push the button to publish the story. Indeed, every once in a while, some newspapers do publish stories that comport with what everyone knows—for instance, about illegal immigrants and drunk driving. In those cases, somehow the offending news got through the system.

Yet many biased stories are published. That's because they are often biased in concept. No marching orders to exclude information need be given. Notwithstanding the content analysis done by the Media Research Center and Accuracy In Media, a more sophisticated reading of "bias," coupled with actual knowledge of what occurs in a newsroom, shows that reporters and editors needn't orchestrate the news consciously, story by story, to exclude unwelcome facts. Their leftist worldview precludes contradictory ideas. It isn't that they take their side versus another or give short shrift to conservatives. For them, no other side exists. They don't need to spin the actual story. The concept took shape before the story was written.

Point is, the average newsroom leftist is impervious to truth. He cannot conceive, for instance, that blacks and Hispanics are more prone to crime than whites because they are more violent. Or that Hispanics think drunk driving is a sign of machismo, which accounts for their high rate of DUI fatalities. Or that domestic violence is a problem in Hispanic homes because of Hispanic culture, which prosecutors and women's shelter workers know very well. Or that sex with underage girls is also permissible, again, because of Hispanic culture. Or, with the beheading, that Islam sanctions the castigation of disobedient wives.

This blinkered view of human nature not only prevents most writers and editors from acknowledging the truth about racial and cultural issues but also accounts for their reflexive mendacity about those with whom they disagree. Leftist media people are obsessed with "racism" and other pathologies. They automatically attribute them to whites even as they ignore them in blacks and Hispanics.

Hence the New York Times attack on VDARE.com writer Marcus Epstein and those with whom he produced "Immigration and the 2008 Republican Defeat" [PDF], an American Cause report debunking the myth that immigration cost the GOP the 2008 election. Of course, this cannot be an honest disagreement with the NYT and its editorial positions. Rather, Epstein and VDARE.COM must be "nativists," in NYT's view, guilty of "racialist extremism" and "white-supremacist views." [The Nativists Are Restless, January 31, 2009]A blog item in the Times tossed around words like "racial warfare" and "dark people," hinting, darkly, that Epstein and VDARE.COM Editor Peter Brimelow are covertly plotting a race war against, well, the "dark people." The "dark people's" war against the rest of us seems to have escaped their notice.

Despite the SPLC's well-documented fraud, most journalists cannot conceive that the SPLC is anything but what it says it is. It fights hate and must be on the side of the angels. The SPLC labels VDARE.com as a "hate" site, and that's that.

Unlike the NYT sophisticates, however, most leftist journalists are not leftists because they have thought about things and arrived at an intelligent conclusion. Most don't understand their ideology, as talking to them for a few minutes quickly reveals. They have just been subjected to 12 years of indoctrination in public schools. Many of them spend four years in "journalism" schools at the knee of leftist malcontents. They can't help it.

As an editor, I know that young reporters are shockingly and sadly ignorant.

They can readily unbosom jeremiads about "ethics" in journalism and society's ills, real and imagined. But few of them can tell you a thing about George Washington or John Randolph, even if they know who Randolph was. They know who Martin Luther King and Nelson Mandela are, but don't know when the English colonists arrived at Jamestown. They know the Spanish Conquistadors were evil because they defeated the Mesoamerican Indians, but they likely haven't heard about the Indians' ritual orgies of human sacrifice. They know slavery caused the "Civil War," but not that Yankees dominated the slave trade and that Northerners owned slaves. They can wax poetic about the "Civil Rights Movement," but cannot identify Sgt. York or Audie Murphy as two great American war heroes. They're certain the United States was wrong to imprison Japanese Americans during World War II, but they don't know anything about the era in general or that some these alleged innocents were spies for Tojo.

And, important in the context of the Buffalo beheading and the nature of Islam, they will aver that the Crusades were bad and that Muslims were living peacefully in the Holy Land until evil Christians marched into to do murder and mayhem on the orders of an evil pope.

But, of course, they can't tell you when the First Crusade was or why Pope Urban II called it. They only know the Christians were oppressors and the Muslims were oppressed.

Paradoxically, the best thing I can say about my profession is that it no longer matters much in the Internet Age. Web sites like VDARE.COM now run rings around the legacy media and its leftist writers.

That is why the truth will come out about Muslims' beheading their wives, illegal aliens' driving drunk—and of course, editorialists who plant lies, hate speech and propaganda for the $PLC.

Robert de Brus [Email him] is a newspaper editor somewhere in America.