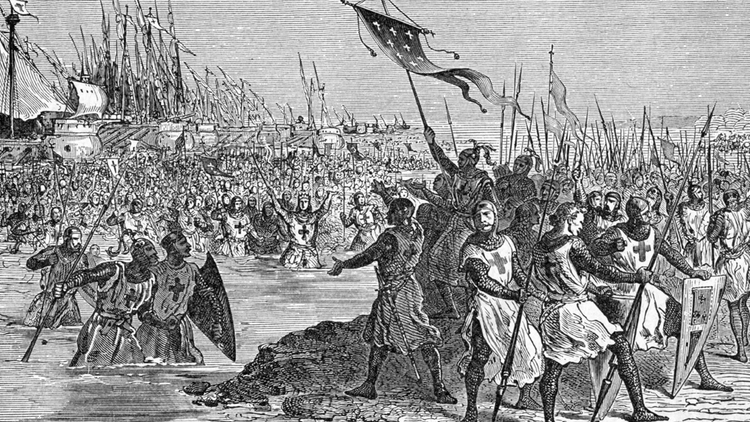 One further casualty of the Sept. 11 attacks may be the word and even the concept "crusade," which seems well on the way to the same graveyard of perfectly good expressions like "Dutch treat" and "Welsh rarebit," among others. Lots of Muslims don't like the term because it calls up unpleasant associations. Therefore, if they don't like it, we can't use it.

The West (that term too is probably objectionable; after all, where exactly is the "West"?) became aware of just how offensive the word "crusade" is to Muslims right after Sept. 11, when President Bush made the blunder of using it in his description of the American war on terrorism. "This crusade, this war on terrorism," the president announced, "is going to take a while." "Muslims," The Washington Post reports this week, "were stung." ["The Crusaders' Giant Footprints", Washington Post, Oct 23, 2001]

Only a thousand years ago, you see, "the West," which then consisted of little more than a few gangs of mounted and armored bandits who had given themselves fancy titles, decided to invade the Middle East, which was under the control of the Muslims. The Westerners launched the invasion as a religious war, to reclaim the lands of the infidels (the Muslims) and protect Christian holy places in the region, and therefore the wars were called "crusades" because of the cross the medieval knights wore and fought for. The Muslims, as the Post is most careful to explain, did not care for that.

"To them," the Post's story assures us, "'crusade,' even uncapitalized, is a profoundly loaded term. It evokes not just a war against their people, who were hacked apart, man and child, 1,000 years ago, until the streets of Jerusalem and other cities ran deep in blood. It evokes an unprovoked war against their religion and their every way of life—a war they see mirrored today in the steady corrosion of Islamic values by a globalizing Western culture they believe undermines their families, trivializes learning and profanes their God."

Only deep into the story does the Post mention, while expounding on how tolerant Islam was, that "Islam spread north and westward from Arabia into the crumbling remnants of the old Roman Empire." Indeed. And just how did Islam "spread," do you suppose? Well, now, actually, as the Post finally notes in passing, "Midway through the 8th century, Arab forces had conquered most of the Middle East and were on their way to Spain." Just so.

The point is that (a) the Arabic Muslims, energized by their new faith, embarked on a jihad (that term might be as offensive to Westerners as "crusade" is to Muslims, but that's OK) to conquer everything in sight, and (b) most of the lands they conquered—in the Middle East and North Africa—were or had been provinces of the Roman and Byzantine Empires and were Christian. The Muslims might have sat around wondering, 300 years later, why the dickens these "Westerners" were invading "their" territory, but someone should have explained to them that it was largely because they conquered the lands from Christians.

Also, as the Post notes, Muslim rulers by the 11th century had started mistreating Christians under their power, attacking Christian pilgrims and desecrating Christian holy places. Much of the rest of the Post's story is devoted to explaining how civilized the Muslims were compared to "Western Christendom ... sunk in the Dark Ages of violence, ignorance and superstition."

Well, maybe so, depending on whether you think Christianity is more ignorant and superstitious than Islam, but the point is that the West, through the Crusades themselves, was beginning to lift itself out of the centuries-long aftermath of the collapse of the Roman Empire and the barbarian invasions. The Crusades were in fact one of the first efforts of Western Man to expand beyond the narrow borders in which he was born. They were indeed often brutal, as most wars eventually are, but so far from being a period for the West to deny and be ashamed of, they ought to be a source of pride.

In the end (or at least up until now), the West surpassed the Muslim civilization, but it ought to tell us something about the state of the West today that no sooner did Muslims start kicking back on Sept. 11, than the West started apologizing for what it did a thousand years ago. The Crusades as a historical episode are now on the same moral plane as slavery and the discovery of America, and without understanding what's happening or why, Western leaders are happy to abandon every legacy of their race and civilization if only no Non-Westerners are "offended." If the modern West has no more confidence in itself and its historic achievements than that, then the "West" really should be buried because it's already dead.