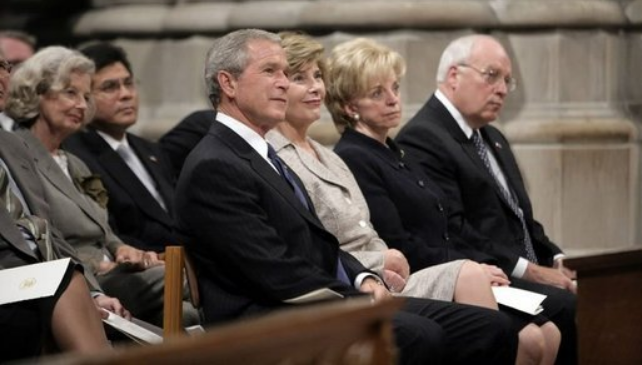 The Color Of Crime And The New Orleans Nightmare: George W. Bush vs. Jared Taylor

And so it begins again …

"President Bush, who had just returned from his fourth visit to the Gulf Coast, told an audience at the National Cathedral today that he would use the rebuilding process to correct the poverty born of racial discrimination that had left so many of Hurricane Katrina's victims vulnerable. 'The greatest hardship fell upon citizens already facing lives of struggle: the elderly, the vulnerable and the poor,' he said. 'And this poverty has roots in generations of segregation and discrimination that closed many doors of opportunity. As we clear away the debris of a hurricane, let us also clear away the legacy of inequality.'"[Bush says Reconstruction Must Address Poverty, Inequality, By Emma Vaughan and Johanna Neuman Los Angeles Times September 16, 2005]

Of course, what we all saw on TV from New Orleans was less the "legacy of inequality" with "roots in generations of segregation and discrimination" than the full display, in the absence of the Police Power, of the modern black underclass tendencies toward violent criminality and feckless dependency.

Indeed, the great majority of the thugs who terrorized the flood victims and rescue workers were born long after LBJ's War on Poverty began in 1965. Most, probably after the last white mayor of New Orleans left office 27 years ago.

Yet, already our visual memories are being overwritten by the professional word-slingers because—as John Derbyshire recently pointed out in a column that got spiked by National Review for the tautological reason cited in its title—"You Can't Talk About That."

So, now, 41 years after LBJ's, we have GWB's War on Poverty. The first one turned out to be a moral disaster for African-Americans, helping their crime and illegitimacy rates shoot upwards. But, judging by the President's recent speeches, he is gearing up, like a French general in 1939, to refight the last War on Poverty.

Will the new one turn out any better? Only if America's policy elite freely discusses what actually are the problems of poor African Americans—the ones that cause too many of them to behave as we saw in New Orleans.

And what are the odds of that?

Instead, the social engineering programs will be designed to battle those ills that we are allowed to write about: "segregation," "discrimination," and "inequality," to quote the President, who, I seem to recall, was once a Republican.

Of course, one step the Bush Administration could take to help poor blacks would be enforce the laws against the illegal immigration that drives down the wages African-Americans could earn by honest labor.

But don't expect any mention of that!

Here's one simple test of whether the New, Improved War on Poverty will be based on reality rather than tired clichés: Will Jared Taylor's fact-filled new report on racial difference in crime rates, an updating of his 1999 survey "The Color of Crime," [PDF] be discussed openly in the press or will it be as hushed up as the original?

The self-serving reasons that journalists don't write in public what everybody talks about in private are thoroughly entrenched.

The black imprisonment rate is a striking 33 times higher than the Asian imprisonment rate—a figure I've never seen quantified before (although I don't think anybody could be too surprised by it).

These incarceration statistics, the report shows, are very much in line with the racial patterns also seen in both arrest rates and in the FBI's Annual Survey Of Crime Victims.

So unfairness in the justice system plays little or no role in these disparities.

High crime rates in black neighborhoods are a terrible burden on local entrepreneurs, thus holding back the economic advancement of the race. But it is largely taboo to discuss racial disparities in criminality in the mainstream media, even though most of the data Taylor assembles is currently available on scattered government websites. For example, the federal Department of Justice's page on homicide statistics by race states, "Blacks were 7 times more likely than whites to commit homicide in 2002."

I'm sure the statistics Taylor reports will be dismissed simply because it will be easy to criticize Taylor's principles.

He and his journal, American Renaissance, espouse a white nationalist viewpoint. Of course, Black, Hispanic, Asian, Armenian, Jewish, Arab and all those other cheerleaders-with-a-chip-on-their-shoulder activists push for the interests of their ethnic groups too—but that is different, apparently.

I disagree with Taylor's principles. As I wrote in VDARE.com last year:

"Personally, I am a citizenist… My starting point in analyzing policies is: 'What is in the best overall interests of the current citizens of the United States?'

"In contrast, so many others think in terms of: 'What is in the best interest of my: identity group / race / ethnicity / religion / bank account / class / ideology / clique / gender / sexual orientation / party / and/or personal feelings of moral superiority?'

"Precisely because basing loyalties upon a legal category defined by our elected representatives is so unnatural, it's the least destructive and most uplifting form of allegiance humanly possible on an effective scale."

Yet disputes over values are irrelevant to whether the facts in Taylor's report are correct or not. (They are.)

Of course, that won't keep Taylor's report from being denounced ad hominem.

"Nazi theory indeed specifically denies that such a thing as 'the truth' exists. There is, for instance, no such thing as 'Science.' There is only 'German Science,' 'Jewish Science,' etc… This prospect frightens me much more than bombs

And yet, this manner of thinking, this dismissal of objective reality in favor of assessing whose side the speaker is on, is probably as popular today in America as it was in Berlin and Moscow in Orwell's day.

In recent weeks, I've written extensively about the racial IQ gap, a subject the press typically ignores—or disseminates disinformation about. Still, we shouldn't blame them too much: IQ is a moderately complex topic, one that many members of the press simply aren't smart enough and intellectually curious enough to master.

In contrast, censoring the news about crime rates can't be blamed on journalists' stupidity. Instead, it demonstrates an appalling degree of moral corruption in our media because virtually every adult in America knows there are racial differences in crime rates.

Everybody talks about real estate, and the racial makeup of neighborhood is the largest single factor driving crime rates and thus differences in house prices and apartment rents within a metropolis.

The media elite's assumption appears to be that if the public someday became aware of the truth about race, then the American people would instantly dig up Hitler's ashes, clone his DNA, and elect Hitler 2.0 as Fuhrer-for-Life.

But, as I've been pointing out for a decade, most Americans do in fact know the basic facts about race. They talk privately about them all the time. And the world continues spinning on its axis.

Instead, what we're really not supposed to do is write about the facts for the elites interested in public policy.

Consequently, the raffish adventurer Sir Richard Burton (not the actor, but the Victorian explorer, writer, and diplomat who was a model for Evelyn Waugh's Basil Seal) was knighted by Queen Victoria three years after he published his translation of the Kama Sutra.

Burton was Victorian Britain's most prominent advocate of polygamy, harem-keeping, and Eastern erotica. But he was also employed by the Foreign Office for decades. Her Majesty's Government didn't approve of Burton's enthusiasm for non-Western sexual mores and practices. But if they were going to run the Empire, they knew they needed to understand them.

In contrast, the American elite's attitude is that the worst sin is to try to understand race honestly.

So what exactly would happen if the press told the truth? Would white neighborhoods have higher housing prices than black neighborhoods?

No, the main difference would be that if we could honestly discuss how the world works, we could use that understanding to craft policies more likely to achieve the goals of the American people.

So why do the pundits and reporters lie? In my experience, the liberal whites who run the media don't actually care much about blacks or other minorities. Nor are they consumed by White Guilt.

They're not blaming themselves, you'll notice, just other white people, ones they already despise. What they truly care about is claiming social superiority over other whites by demonstrating their exquisite racial sensitivity.

For this reason, Taylor's strategy of wanting whites to imitate the ethnocentrism of minorities, while it will inevitably gain adherents as the white majority is reduced to a white minority by immigration, is highly unlikely to succeed any time soon.  There is simply too much rivalry among whites.

To many elite whites, minorities are just useful pawns in the great game of clawing their way to the top of the white status heap.

Which is, more or less, the only game in town. Taylor's dream of white solidarity has no appeal to white intellectuals and writers simply because they believe, condescendingly but also fairly accurately, that they don't face significant nonwhite competition. The vast majority of their rivals are other whites.

For American citizens on the whole, however, especially for poor African-Americans who desperately need the dignity and the discipline provided by having a decent-paying job, illegal immigration is a massive problem.

Still, the American elite is going to pay at least some of the taxes for the GWB War On Poverty. And Jared Taylor's data suggests that dumping dollars on the problem won't cure it this time either.