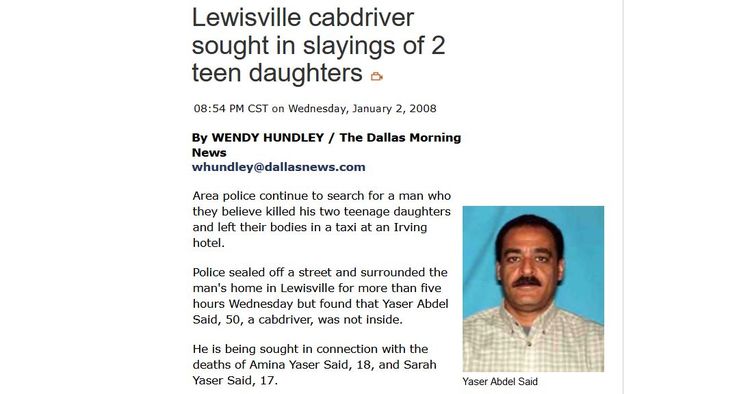 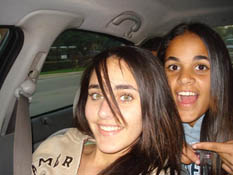 The double murder of Amina and Sarah Said near Dallas at the hands of their Egyptian immigrant father has honor killing written all over it: Muslim male arrives in the mid-1980s with his family, fails to assimilate but his female children do, expecting to lead American lives with individual freedom. He responds by killing them.

It's another family culture clash that led to death, a syndrome that has become rather common in Europe, but not as much here. Yet.

Hopefully this terrible crime will open some eyes in this country that with Muslim immigration comes the whole gamut of culturally embedded pathology typical to the Religion of Peace. Many elite opinion makers believe that America does assimilation better and therefore we citizens have nothing to fear from Muslims residing in our communities. Polling of actual Muslims, however, shows that assumption is wrong-headed and dangerous.

Certainly the perp in question will eventually get Texas justice, courtesy of Old Sparky, and will learn assimilation the hard way.

Area police continue to search for a man who they believe killed his two teenage daughters and left their bodies in a taxi at an Irving hotel. [...]

She said the sisters, who wore typical American clothes, didn't talk much about their family. "I didn't know they were Muslims until she told me they were Egyptian and Muslim," Liz said. [Lewisville cabdriver sought in slayings of 2 teen daughters, Dallas Morning News, Jan 3, 2008]

Friends: Murdered Teens Were Afraid Of Their Dad

Sisters, Amina, 18, and Sarah, 17, were each shot to death. Friends of the girls say their father was Egyptian and critical of popular American lifestyles. ""He was really strict about guy relationships and talking to guys, as well as the things she wears," said Kathleen Wong, a friend of the dead teenagers. "I'm definitely 100% sure that it was her dad that killed her."

And from Yemen, here's a timely opinion piece: There must be violence against women. (See also Robert Spencer's commentary.)

This Muslim writer expresses the traditional view of Islam, that women should be subjugated, which is being implanted into America with increased numbers of Muslim immigrants — tens of thousands every year. Why does Washington continue to welcome foreigners with values antithetical to our own? There's no upside to this policy, just more deaths of innocents, like the Said sisters.