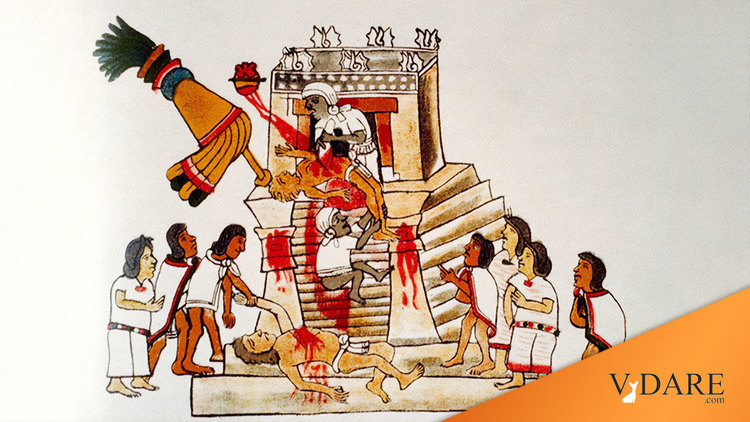 This, featuring the voices of, among others, Fabian Nunez, is not nearly as funny as the one with the President.

On it you will hear Jose Angel Gutierrez talking about how Mexican, as descendants of the Aztecs, Incas and so on, are morally exempt from immigration laws because they've been around for "forty thousand years."

For what those forty thousand years were like, see Stephen Cox's November 1995 Liberty Magazine review ofConquest: Montezuma, Cortes, and the Fall of Old Mexico.

: the review is called I Left My Heart in Tenochtitlan in

On November 8, 1519, Hernan Cortes and his Spanish expeditionary force arrived at the Aztec capital of Tenochtitlan. They were greeted by the Aztec nobility at a place on the outskirts of the city called Malcuitlapilco, which means "the end of the file of prisoners." In 1487, when the Aztecs inaugurated the Great Temple in Tenochtitlan, a line of prisoners waiting to be sacrificed on the city's pyramids had reached this point. It was two miles to the Great Temple, and there were four such lines of victims.

You can see them there, young men standing in the sunlight in the great city built on an island in the great lake of Mexico, a name that means "in the navel of the moon." The sky was blue above them, and the two lofty volcanoes, Iztaccihautl and Popocatepetl, rose in the distance. Throughout the day, the young men waited in line for the blood-caked priests of Huitzilopochtli, god of the sun and the chase, to rip their hearts out and roll their bodies down the sides of the pyramid so that they could be dismembered and eaten. At the foot of the Great Temple, a carved stone was set in the pavement; this stone was called "Huitzilopochtli's dining table."

The interest of the Aztecs can never fade; the story of their conquest by the incredible strangers who came from beyond the sea can never lose its romantic power.

The one part I still remember, eleven years after reading this review: In Mexico, pork became a favorite dish of the former Aztec nobility, "since it had a slight taste of human flesh" (p. 578).