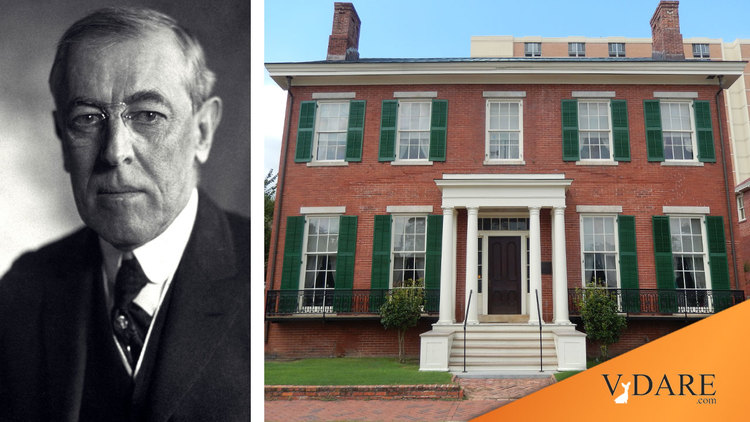 Earlier: Dead White Males Being Written Out Of History One By One: Founding Father James Madison Sidelined At His Own Home For The Advancement Of An Anti-White Agenda

In May 1866, a little group of young men in the Tennessee village of Pulaski, finding their time hung heavily on their hands after the excitement of the field, so lately abandoned, formed a secret club for the mere pleasure of association, for private amusement—for anything that might break the monotony of the too quiet place, as their wits might work upon the matter, and one of their number suggested that they call themselves the Kuklos, the Circle.

This prettified depiction of the founding of the Ku Klux Klan is from  A History of the American People by Princeton professor and future President Woodrow Wilson.

The main activities of the Klan, wrote Wilson, were “pranks,” “mischief” and “frolicking.” Occasionally they did prey upon blacks, Wilson conceded, but black fears of the Klan were “comic.”

Why did Wilson, the President of New Jersey’s Princeton University before he was elected President of the United States in 1912, have such a positive view of the clandestine Resistance to the Northern Reconstruction of the Southern States in the post–Civil War era?

Well, as a native (born 1855) of Augusta, Georgia, who grew up in Columbia, South Carolina, he had been Reconstructed himself.

Wilson’s earliest memory was of playing in his yard and standing near the front gate of the Augusta parsonage at the age of three, when he heard a passerby announce in disgust that Abraham Lincoln had been elected and that a war was coming. Wilson’s family identified with the Southern United States and were staunch supporters of the Confederacy during the American Civil War. Wilson was one of only two U.S. presidents to be a citizen of the Confederate States of America, the other being John Tyler.

A quote from Wilson’s History of the United States appears in the anti-Reconstruction, pro-Klan movie Birth Of A Nation, which Wilson had screened at the White House. 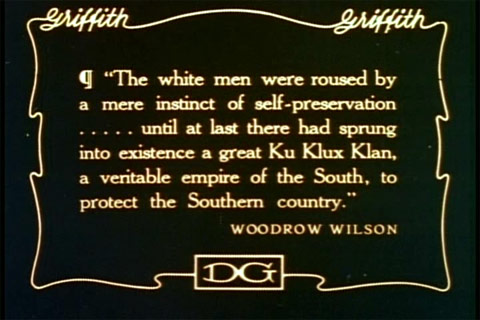 In February 1915, following a White House screening of Birth of a Nation, which depicted the Ku Klux Klan as heroic defenders of white womanhood in the South after the Civil War, a stunned Wilson said:

“It’s like writing history with lightning. My only regret is that it is all so terribly true.“

In recent years, Wilson, who was generally what’s called a Progressive except on racial matters, has been part of the Year Zero being applied to American white historical figures since 2020.

Love some rebranding. Starting this month @HistColumbia is now renaming this house tour "The Museum of Reconstruction."

Come on down. You might get me. And I have ALL the stories of Reconstruction, SC to tell. https://t.co/lyvjii91YG pic.twitter.com/ln9MFvnZ8X

Here’s some text from the museum, with emphases added:

Visitors to The Museum of the Reconstruction Era are immersed in the context of Columbia in the 1870s as they explore how Columbia’s 9,297 residents, black and white, navigated the profound political, social and economic changes of Reconstruction. Through panel exhibits, interactive technologies and guided tours, visitors learn that this was a time when African Americans participated in government, founded churches, claimed access to education and negotiated new terms of labor. African American leaders are highlighted throughout the museum, including Charles M. Wilder, one of the first African Americans appointed as postmaster and Richard Greener, first black graduate of Harvard and the first black faculty member at the University of South Carolina, to name just a few.

The Museum of the Reconstruction Era also offers unparalleled opportunities for visitors to engage in meaningful conversation about the changing meanings of citizenship over the past 150 years. Through interactive dialogue visitors discuss the importance and responsibilities of citizenship in the Citizenship Center, a room featuring the 13th, 14th, 15th Amendments prominently on the wall alongside provocative questions and videos intended to inspire discussion and explore the meanings of civil rights and engage in open dialogues about race and citizenship.

Completed in 1871, this Italian villa-style residence was home to a 14-year-old boy—the future 28th United States President—named “Tommy“ Woodrow Wilson. During the height of Reconstruction, Woodrow Wilson’s parents built this house, the only one they would ever own. Although the home has changed hands many times since the teenaged future president lived here, it stands as a reminder of the complicated racial history of one of the most misrepresented and misunderstood periods of American history.

Following a nine-year, comprehensive rehabilitation, the site features 21st-century exhibits that interpret the racial, social and political landscape of Columbia and Richland County during the Reconstruction era. The site is owned by Richland County and managed by Historic Columbia.

Previously promoted as the “Woodrow Wilson Family Home,” in 2014, Historic Columbia shifted the narrative at the site to explore the racial, social, and political landscape of Columbia and Richland County during the post-Civil War Reconstruction Era (1865-77). The proposed name change reflects that interpretive change and addresses the visitor’s experience in a more transparent and direct way.

The repositioning of this site allows Historic Columbia to take a more forward-facing role in addressing the ongoing dialogue around the importance of the Reconstruction Era and the connection to current events. It foregrounds Historic Columbia’s work on this pivotal era and more directly acknowledges the organization as a resource for those in search of a deeper understanding of this transformative period in American history.

The local landmark and National Register-listed building at 1705 Hampton Street will retain the title of the “Woodrow Wilson Family Home” as its preservation was predicated on its connection to the 28th president of the United States; however, all reference to the site as a museum will change.

There are reasons for conservatives to be critical of Woodrow Wilson, but of course this isn’t really about hating Wilson, it’s about hating white America, so in this case we love him for the enemies he has made.