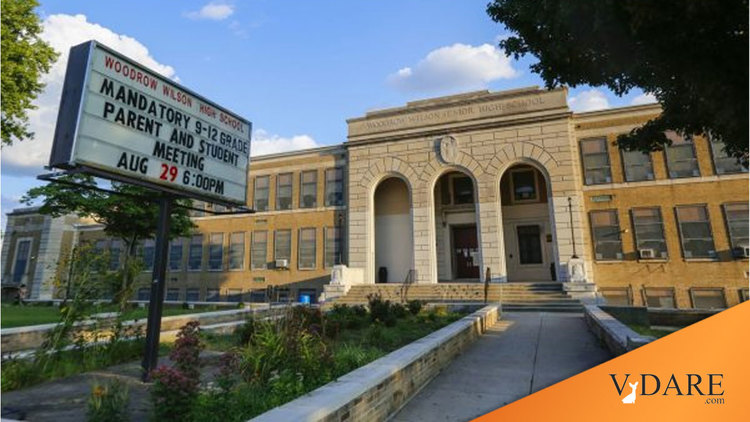 The Great Replacement is upon us.

A New Jersey school district is planning to rename one of its schools named after former President Woodrow Wilson due to what critics say is a legacy of racism.

The campaign for change began with a petition on Change.org in 2019 before gaining support last summer after George Floyd was murdered by Minneapolis police, spurring protests nationwide.

A 100-member renaming committee — composed of parents, activists and school officials — was formed last year to pick a new name. Some names that were considered included the late civil rights activist and US Rep. John Lewis, former President Barack Obama and a former superintendent who recently passed away, according to NJ.com. Other simpler names such as East High School and Camden East High School were also considered.

The name change was put on hold, however, when the school focused its attention on its response to the COVID-19. The district said at its Oct. 26 board of education meeting that a new, 10-person committee would be formed, restarting the renaming process from scratch, according to NJ.com.

“We are proud that our schools represent places of diversity and inclusion, and we plan to increase our efforts to reshape the identity of this venerable and cherished school,” the school said in a statement to the outlet. “We plan to collaboratively work with current Wilson students, parents, alumni, and community leaders on an inclusive process to rename the school.“

His legacy has been challenged by activists and academics in recent years due to his support of racist policies.

In June 2020, the board of trustees at Princeton University, Wilson’s alma mater, voted to drop his name from his namesake School of Public and International Affairs.

“Wilson’s racism was significant and consequential even by the standards of his own time. He segregated the federal civil service after it had been racially integrated for decades, thereby taking America backward in its pursuit of justice,” university President Christopher L. Eisgruber wrote in a statement on the board’s decision. “He not only acquiesced in but added to the persistent practice of racism in this country, a practice that continues to do harm today.”

Also last June, New Jersey Gov. Phil Murphy said he would no longer use Wilson’s desk at his office in Trenton.

Who cares if he was a progressive during his time alive? He was a white man who held "racist" views, thus he must be cancelled forever.

Perhaps the cutoff date of 1965 is too generous?

Maybe just take all statues to white men down, and pass a law ensuring no building, street, or school is ever named for a white male again.

“The country is having a reckoning and Woodrow Wilson, and his legacy is being swept up in that, as it should be,” Murphy said at a press conference at the time.