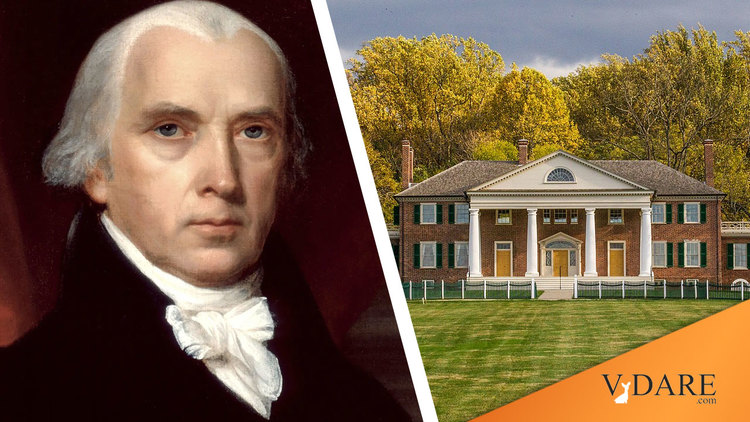 Dead White Males Being Written Out Of History One By One: Founding Father James Madison Sidelined At His Own Home For The Advancement Of An Anti-White Agenda

Après nous, le deluge. Right? In the wake of George Floyd’s fentanyl overdose in May of 2020, America has been remade into the image of the 1619 Project. All Dead White Males and their legacies are currently being uprooted, carefully replaced with an anti-white memory in a fertile soil ripe for harvesting a new nation dedicated to the proposition that all white men past, present and future are unworthy of admiration.

The globalist billionaire who funded the woke transformation of Thomas Jefferson’s Monticello paid for a similar overhaul of James Madison’s house—where the author of the US Constitution has been shoved into a supporting role, while slavery and racism take center stage.

No American flags fly at Montpelier, Madison’s plantation home in rural Virginia, and not a single display focuses on the life and accomplishments of America’s foremost political philosopher, who created our three-branch federal system of government, wrote the Bill of Rights and the Federalist Papers, and served two terms as president.

Instead, blindsided tourists are hammered by high-tech exhibits about Madison’s slaves and current racial conflicts, thanks to a $10 million grant from left-leaning philanthropist David M. Rubenstein.

“I was kind of thinking we’d be hearing more about the Constitution,” one baffled dad said when The Post visited the president’s home this week. “But everything here is really about slavery.”

“It’s been inspirational … I guess,” shrugged John from Wisconsin after taking the $35 guided tour.

Reviewers on social media have been more harsh.

“They really miss the mark,” Greg Hancock of Mesa, Ariz. posted last week. “We left disappointed not having learned more about … the creation of the Constitution.”

“The worst part were the gross historical inaccuracies and constant bias exhibited by the tour guide,” complained AlexZ, who visited July 8.

Visitors to Montpelier get to see just three rooms in the sprawling mansion. The estate “made Madison the philosopher, farmer, statesman, and enslaver that he was,” the guide said as The Post’s group entered the home — a line she repeated at the end of her spiel.

Outdoors and in the house’s huge basement, dozens of interactive stations seek to draw a direct line between slavery, the Constitution, and the problems of African Americans today.

Hurricane Katrina flooding, the Ferguson riots, incarceration, and more all trace back to slavery, according to a 10-minute multi-screen video.

Another exhibit damns every one of the nation’s first 18 presidents — even those, like John Adams and Abraham Lincoln, who never owned slaves — for having benefited from slavery in some way.

The only in-depth material about the Constitution itself appears in a display that pushes the claim, championed by the controversial 1619 Project, that racism was the driving force behind the entire American political system.

Even the children’s section of the gift shop leans far left, with titles like “Antiracist Baby” by Ibram X. Kendi and “She Persisted” by Chelsea Clinton.

“The left is trying to revise our history and is perpetuating a dishonest narrative,” the Republican said.

And yet most of the people on the right are afraid of admitting that our Founding Fathers of the United States of America, conceived in this new nation a country dedicated to life, liberty, and the pursuit of happiness for white men of good character and their white progeny.

Either America was egalitarian anti-white from 1619, or America was a nation dedicated unapologetically to the promotion of whiteness.