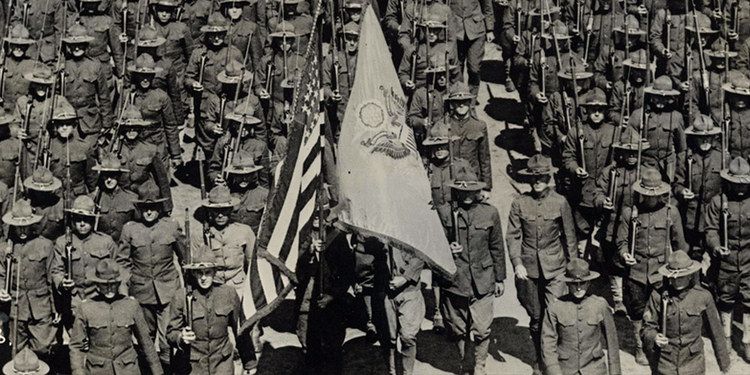 The American Myth of World War I

From the January 2004 issue of Chronicles:

In 1917, two revolutions engulfed war-ravaged Europe. The first was America's military intervention in France on June 26, which prolonged World War I and, thus, made possible the second: the communist seizure of power in Russia on November 7.

To win maximum public support for their respective revolutions, the two rivals, Woodrow Wilson and Vladimir Lenin, adopted the same tactic. Each declared his forces were fighting to establish peace, democracy, and national self-determination in Europe.

A common rhetoric concealed a common goal. Despite ideological differences, Wilson the capitalist and Lenin the Marxist shared the same ambition—the destruction of the traditional cultural and social order of Europe. Each sought to convert World War I into a war against Western civilization. They differed only on which ideology—"democratic capitalism" or "democratic socialism"—would be the foundation for the New World Order they wished to impose upon Europe.

When Wilson militarily intervened in that war, he instigated a revolution against the traditional foreign policy of the United States. As George Washington emphasized in his Farewell Address: "The great rule of conduct for us in regard to foreign nations is—in extending our commercial relations—to have with them as little political connection as possible."

More prophetic were the words delivered by John Quincy Adams. In his speech to the U.S. House of Representatives on July 4, 1821, celebrating Independence Day, he warned against going abroad in search of "monsters to destroy" and foretold the consequences if the federal government pursued foreign adventures.

["America] has abstained from interference in the concerns of others, even when conflict has been for principles to which she clings, as to the last vital drop that visits the heart. . . . Wherever the standard of freedom and independence has been or shall be unfurled, there will her heart, her benedictions and her prayers be. But she goes not abroad, in search of monsters to destroy. She is the well-wisher to the freedom and independence of all. She is the champion and vindicator only of her own. . . . She well knows that by once enlisting under other banners than her own, were they even the banners of foreign independence, she would involve herself beyond the power of extrication, in all the wars of interest and intrigue, of individual avarice, envy, and ambition, which assume the colors and usurp the standard of freedom. The fundamental maxims of her policy would insensibly change from liberty to force . . . "

Wilson ignored this warning. His revolution, however, only succeeded because of two previous events. First, Lincoln had shredded the Constitution, turning the United States from a voluntary union of states into a consolidated empire for the benefit of Northern business interests. Second, Theodore Roosevelt had used the Spanish-American War to expand Lincoln's continental empire into a full-fledged imperial regime presiding over a string of overseas colonies. As William Graham Sumner wrote in "The Conquest of the United States by Spain," "We have beaten Spain in a military conflict, but we are submitting to be conquered by her on the field of ideas and policies."

Mark Twain aptly labeled this period (roughly 1865-1900), when the Old Republic was replaced by a permanent kleptocracy with imperial pretensions, "The Gilded Age"—hypocritical and corrupt, cruel and flamboyant. By 1864, Lincoln's attorney general, Edward Bates, already lamented that "The abuse of official powers and thirst for dishonest gain are now so common that they cease to shock." The American Empire created by Lincoln and Roosevelt had replaced Thomas Jefferson and Monticello with Boss Tweed and Tammany Hall.

American involvement in World War I, first as a neutral selling to the Allies and, later, as a belligerent fighting with the Allies, vindicated the words of John Quincy Adams—"individual avarice, envy, and ambition . . . usurp[ed] the standard of freedom."

In War Is a Racket, an exposé of profiteering, U.S. Marine Corp Maj. Gen. Smedley Darlington Butler wrote: "At least 21,000 new millionaires and billionaires were made in the United States during the World War."

Other industries, no matter how irrelevant or incompetent, also made handsome profits. For example, as General Butler notes, after entering the war, the U.S. government spent one billion dollars on airplane engines that were never used and $635 million on ships made of wood that sank; purchased 60 million yards of mosquito netting for American troops in France, hundreds of thousands of McClellan cavalry saddles for an American army in France that had no cavalry, 35 million pairs of hobnailed shoes for four million American soldiers, and, in the age of the automobile, 6,000 buckboards.

By first selling the Allies food and such essential war materiel as rifles, howitzers, and explosives, then extending them loans when they could no longer pay in cash, the United States went from a net debtor to a net creditor. By 1917, the Allies owed approximately $12 billion to the U.S. government, banks, and manufacturers. Of this total, the United Kingdom owed four billion dollars; France, three billion.

The war, however, was a two-edged sword. If the Allies had defaulted, which would have occurred if they had been defeated or if the war had ended in a stalemate, those same American businesses that had grown rich extending loans and credits to the Allies would have been ruined. In 1917, such a defeat or stalemate looked likely, as mutinies erupted in both the French and Russian armies.

This fear—that major American businesses were facing potential bankruptcy which, in turn, could trigger an economic depression in the United States—coupled with an increasing messianic belief in himself as creator of a new European order, persuaded Woodrow Wilson to intervene militarily in 1917.

Employing a series of clichés and double standards, Wilson and his supporters proclaimed American intervention a moral imperative. It was "the war to end all wars"—except those in colonial possessions; "the world must be made safe for democracy"—except in India, the Philippines, etc.; all nations had the right to "self-determination"—except Austrians, Croats, Germans, Hungarians, Slovaks, Slovenes, etc.

And, while declaring America's intervention would guarantee a peace based on the principles of "no annexations" and "no punitive damages," the Wilson administration annexed the Danish West Indies, and American businesses that had extended loans to the Allies backed punitive damages against Germany.

First, it needlessly prolonged the war. By the spring of 1917, the Allied and Central Powers had been bled to death in such debacles as Jutland, Verdun, and Somme. Both sides were actively seeking an end to the war. Germany and Austria-Hungary had already offered several peace proposals, and ongoing attempts were being made by the Vatican, Denmark, Sweden, and even individual Americans to mediate a peace settlement. American intervention enabled the Allies to reject a negotiated settlement and to pursue a military victory. This prolonged the war by nearly two years.

Despite the Armistice and knowledge that famine was sweeping across much of Central and Eastern Europe, the Allies continued their food blockade of Germany until July 11, 1919, in order to force the Weimar Republic to sign the Versailles Peace Treaty. The total number of German civilian deaths from starvation rose to nearly one million.

Third, American entry into the war needlessly destroyed the economic and social order of Europe. Woodrow Wilson, in his self-appointed role as creator of a new Europe, demanded institutionalized chaos as the price of peace. The centuries-old monarchies of Austria, Hungary, Prussia, and the German states were abolished. The Austro-Hungarian Empire, which, over the course of centuries, had prevented a Turkish conquest of Western Europe and had provided stability in Central Europe, was dismembered. It was replaced by an assortment of unstable entities—truncated Austria and Hungary, multiethnic Poland and Rumania, artificial Czechoslovakia and Yugoslavia. Along with these new states came the introduction of weak currencies, which exacerbated the economic collapse of Central and Eastern Europe. Germany was forced to pay war reparations of $31 billion, plus ten percent of her national income annually, to cover Allied occupation costs and pre-war debt. The result was inflation, deflation, economic dislocation, economic depression, the collapse of the middle class in Germany, and political instability in much of Europe.

These were the consequences of America's intervention. Stripped of its political rhetoric, for truth is the first casualty of war, the reality of America's intervention was that patriotism provided the cover for profiteering; democracy was a euphemism for demagoguery; self-determination was a pretense for self-aggrandizement; and the only lasting peace was that of the dead and dying—of men, nations, and Western civilization.

The arrival of American troops in 1917 brought Europe damnation, not salvation. By funding and then waging a war that destroyed the traditional social order of Europe, the United States facilitated the rise of totalitarianism—Stalin in Russia, Mussolini in Italy, and Hitler in Germany. Without American intervention in World War I, there would have been no World War II.