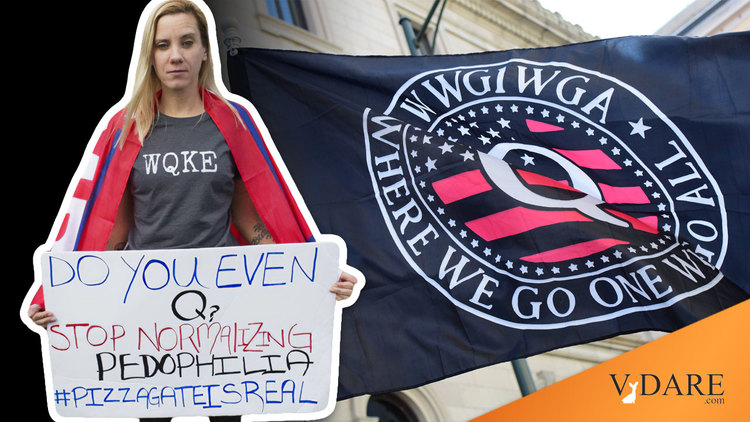 QAnon, Women, And The New Age

I know zip about QAnon, so here’s a friend’s theory:

QAnon is a smorgasbord of previous conspiracy theories. However, my hunch is that the QAnon really changed directions once women took it over.

There’s an L.A. Times story about how QAnon took over the yoga and New Age communities, and among mommy bloggers. A lot of these mommy bloggers and yoga girls are Millennials, so they’re about the right age to have been in high school or college in the 2000s when the child trafficking awareness push was a big thing. This primed them for “save the children” fear and rhetoric which is now at the center of QAnon. Remember Invisible Children? They were a non-profit around in the late 2000s, and they were later behind the biggest online viral video ever up to that point: Kony 2012.

Note: If you want to see how successful a former QAnon-obsessed gym mom can be, just look at Marjorie Taylor Greene.

New Age spirituality also puts a heavy emphasis on awakenings and “shifts,” so QAnon’s obsession with an upcoming event that will shake the world to its core fit right in with the curriculum. There’s even a book called “Love, Joy, Trump: a Chorus of Prophetic Voices,” which had a foreword from My Pillow CEO (and frequent Tucker Carlson guest) Mike Lindell. In his foreword Lindell writes “President Trump is working to bring a physical peace on planet Earth in preparation for the Spiritual Awakening and manifestation of Peace on Earth in our lifetimes.” Why of course, how could we have missed it: Donald J. Trump is the one to usher in the Age of Aquarius. (Although before we smile too hard at that, I might point out that the “Age of Aquarius” as a term was popularized by astrologer and Bay Area columnist Gavin Arthur, born Chester Alan Arthur III in 1901, grandson of a former Republican president.)

Another QAnon influence is the popularity over the last twenty years of true crime and forensic shows among women. For a long time CBS was the gold standard for all those procedural shows, and it was recently pointed out that QAnon is for people who have watched too many CBS shows like CSI (which had a majority female audience). The CBS thing is specific because Q and Trump, as written by QAnon, is the fatherly authority figure that CBS loves to build a show around (think of show stars such as Mark Harmon, Tom Selleck, Scott Bakula, etc). Of the major networks, CBS has also historically skewed the most Republican. (Over the years liberals looked down on CBS procedurals, so their cultural influence went almost completely unnoticed.)

QAnon provided an opportunity for fans of those shows to believe they were living in a real life CBS drama: Trump as the rogue leader of a group of Patriots (Doesn’t “The Patriot” already sound like a CBS show?) taking down the crooked and evil swamp. The always salacious, but not quite pornographic, accusations against the global elite is reminiscent of the tone of CBS dramas (there’s a seemingly infinite supply of dead strippers in C.S.I.). Hence their lurid obsession with pedophilia rings and sex trafficking.