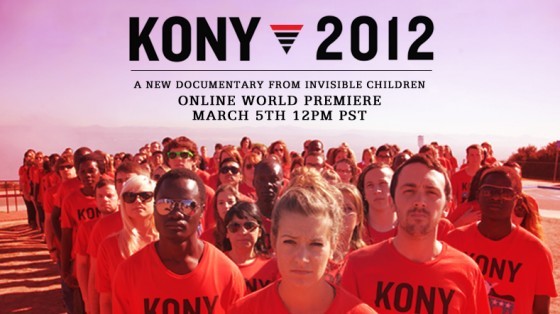 The other night I watched the "Kony 2012" video, whose producers are hoping, squelch the guffaw, will change the world as we know it.

Or, there's this complete freak of an African warlord named Joseph Kony who's somehow managed to create an "army" of thousands of Ugandan children who are compelled to murder and mutilate, and can't we get U.S. forces to arrest him in the jungle, despite there being no national interest in doing so?

Yeah, one of those deals. I've got questions (like, does this not confirm pretty much everything ever written by Richard Lynn about the African IQ/temperament? Is the Ugandan military/police/political apparatus so useless that it can't even find this guy? Does the blond narrator, Jason Russell, ever stop to ponder that for all his self-celebration as the biggest human rights vindicator of all time, he's actually only the 983rd earnest white person who's thought he could somehow save Africa?)

And already, the documentary is coming under criticism for leaving out information. Kony 2012 is ripe for mocking by the Onion.

Still, I give a few points for effective advocacy tactics: they've got the attention of the American government, and they are leveraging social media in a way that may well be unprecedented. They are targeting both policy makers and otherwise famous people (Tim Tebow, Bono) to push the cause, and plan to dispatch their own army of poster-plasterers.

What idea do immigration reformers have that "we can all agree on"? How about the deportation of illegal aliens who kill — particularly the drunk-driving ones?

Our campaign could shamelessly imitate Kony 2012... right down to the stickers and posters. Heck, we could even have fun by deliberately co-opting: wherever their activists show up, ours do too. We stand in the back with our signs and chant our slogans. When they "cover the night", we're right there with them. Right next to their posters, our posters. We make our own video. Fun, eh?