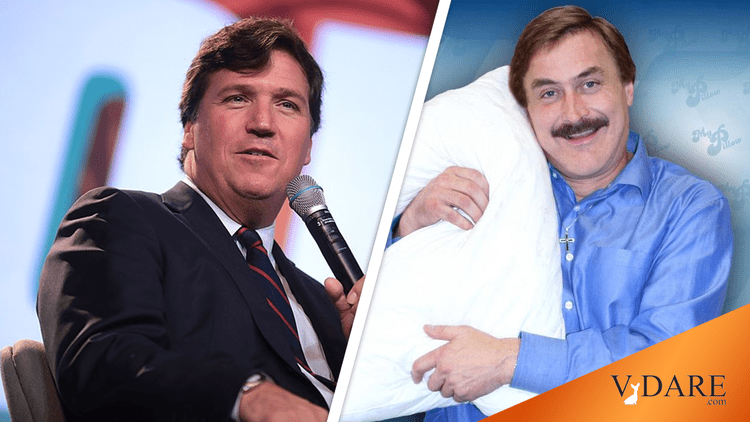 Tucker Carlson Abandoned By Some Advertisers, But Not Mike Lindell Of MyPillow

Tucker Carlson has been having some great broadcasts of late, refusing to bow down to the so-called “Black Lives Matter” hysteria.   Good for him.

Of course, Tucker is under attack and some sponsors are abandoning him.

Fox News host Tucker Carlson is losing more advertisers in the wake of his controversial comments about the Black Lives Matter movement. Walt Disney Co., Papa John’s International Inc. and T-Mobile US Inc. said this week they would no longer advertise on his show after he sparked an uproar in addressing the global protests over police brutality and racial inequality.  “This may be a lot of things, this moment we are living through,” he said Monday on his Fox News show, “Tucker Carlson Tonight.” “But it is definitely not about black lives and remember that when they come for you, and at this rate, they will” [Tucker Carlson Advertisers Depart After ‘Black Lives’ Comment,  by Gerry Smith, Bloomberg, June 11, 2020].

Disney: “A spokesperson for Disney’s ABC told the publication Deadline that ads for its shows were placed on Carlson’s program without the network’s knowledge by a third-party ad buyer.” Acting like they didn’t even know it was on Tucker.

T-Mobile:   “On Tuesday [June 9], T-Mobile Chief Executive Officer Mike Sievert replied to several tweets asking about the mobile-phone carrier’s advertising relationship with Carlson’s show and whether it backed the host’s message.  To one Twitter poster who said he would no longer watch Carlson’s show and called the comments “vile,” Sievert replied, “Same. We aren’t running ads on that show and we won’t be running ads on that show in the future. Bye-bye, Tucker Carlson!”

Papa John’s: “Papa John’s will no longer advertise on any opinion-based programming, it said in an emailed statement Thursday, “Placement of advertising is not intended to be an endorsement of any specific programming or commentary,” the pizza company said.”

Overall, Fox isn’t losing revenue, as a spokesperson said “all national ads and revenue from Carlson’s show have moved to other programs and Fox News hasn’t lost any revenue overall.”

So it’s specifically against Tucker’s show.

Online activists have targeted Fox News advertisers as part of an ongoing campaign to damage the profits of companies that they believe promote bigotry and sexism. The protests following the death of George Floyd have also pressured media companies to step up their support for racial equality.

The so-called “Black Lives Matter” movement is getting big bucks from Corporate America.

According to Alphonso, a TV measurement company, the brands still advertising on Carlson’s show include MyPillow; Relaxium, a sleep aid; LeafFilter, a gutter protector; and KardiaMobile, a heart monitor.

Several major advertisers, including T-Mobile, Disney and Papa John’s, have pulled their financial support for “Tucker Carlson Tonight” following the host’s criticism of the Black Lives Matter movement. However, one of the biggest advertisers on Fox News has no plans to follow suit.  In a statement to Newsweek, MyPillow CEO Mike Lindell, a vocal Trump supporter and Minnesota chairman of his reelection campaign, said the ads would continue [MyPillow CEO won’t pull ads from Tucker Carlson TV show, says ‘all lives matter,’ by David Matthews, New York Daily News, June 11, 2020].

"MyPillow is not changing its advertising. I make all my advertising decisions based on what is best for my customers and my employees. MyPillow believes all lives matter and values all our employees and customers, treating them like family.”