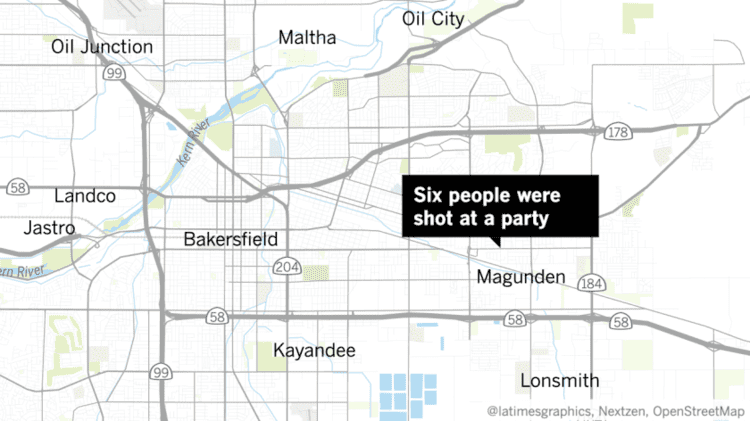 Minorities Not Social Distancing: 400 Plus Person Party In East Bakersfield Scene Of Mass Shooting (With No One Killed)

The reported shooting in East Bakersfield, committed, according to the Kern County Sheriff's department by "four black males driving a white sedan", fits in with what we  call the "Leaded Law" of minority marksmanship. Contrary to Woke belief, blacks commit more mass shootings than whites, but their marksmanship is so bad that frequently no one is killed.(See The “Leaded Law” And Mass Shootings—Poor Black Marksmanship Is Saving Lives for details.)

In this case, police picked up 94 shell casings, and three live rounds at the scene, but while six people were hit, none of them died. [Six people shot at California house party that violated stay-at-home order, by Minyvonne Burke ,NBC News, April 11, 2020]

What's notable is not the mass shooting, but that in East Bakersfield, either blacks or Hispanics are having a 4 to 500 person house party, in spite of Gavin Newsom's stay at home order issued March 19.

The shooting was probably a typical black house party shooting, of which we're reported many examples in the past, but theoretically the victims could be Hispanic, because East Bakersfield is heavily Hispanic.

The local news media presumably knows what color the partiers are, but are determined not to tell us.

Six people shot at a large party in Bakersfield, where there’s a ban on all gatherings, by Richard Winton, April 12, 2020

That's a deliberate decision to subtract news value from a story.

Aside from the "not reporting race" aspect, the fact that minorities are holding 400+ person house parties while white churches are the subject is of police crackdowns is, as I said recently, an example of Anarcho-Tyranny

As we’ve reported repeatedly, governments are afraid to enforce these rules in the inner city—or “outer city” in the case of Paris’s immigrant-ruled suburbs.

And in East Bakersfield, they can have a rowdy, probably illegal even before Coronavirus, party for hundreds of people, and police only notice when there are actually shots fired.